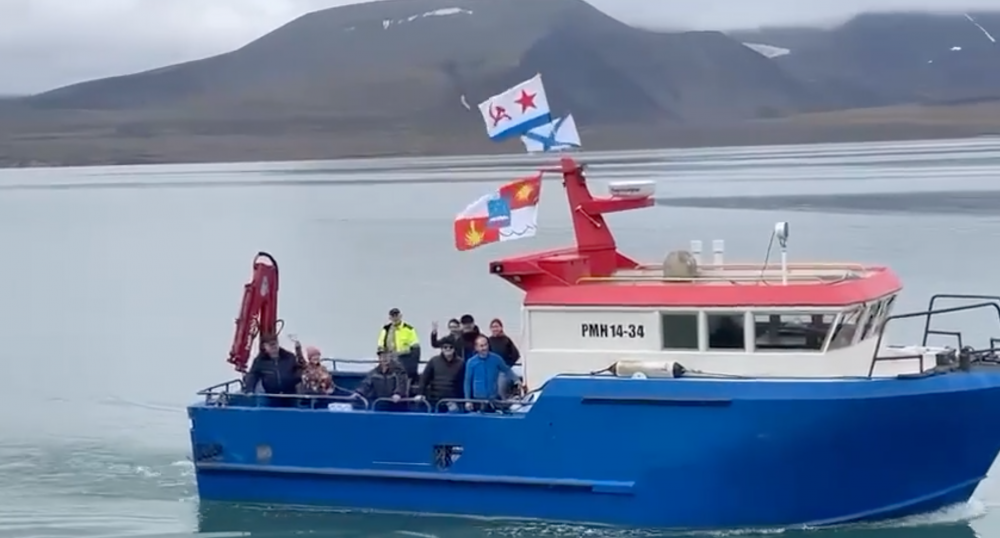 The small ship "RMN 14-34" belongs to Russia's state-owned company Arktikugol and is normally sailing with passengers and cargo between Longyearbyen and Barentsburg. On July 31 this year, the vessel sailed first in the improvised Navy Day Parade in Grønfjorden outside Barentsburg. Screenshot from video

With a Soviet-era navy flag and the Russian national navy flag at the mast, Russian officials made their own Navy Day Parade in Norwegian waters at Barentsburg on July 31.
Read in Russian | Читать по-русски
By

Not all Russians in Norway are sad about the war of aggression against Ukraine. At the mining settlement Barentsburg, the heroism of the Russian Navy was celebrated with a symbolic passage of a few small craft carrying military flags.

The event at Svalbard happened on July 31, the Navy Day holiday in Russia.

Participants were locals in Barentsburg, such as representatives from Arktikugol Trust, the Consulate General, the Grumant tourist company and research institutes. All Russian state employees.

Photos and videos from the symbolic event first appeared in a Telegram post by the Russian Consulate General in Barentsburg and on Facebook by Inga Valerevna, Content Manager with Arctic Travel Company Grumant, a branch of Trust Arktikugol, the state-owned coal mining enterprise which practically is in charge of all Russian operations at Svalbard.

“Congratulations to all involved and sympathizers on Navy Day,” Valerevna wrote with the photos. She added with a smile: “We had a parade of marine equipment. Because Svalbard is a demilitarized zone, then our equipment is just marine)).”

The Consulate General said the parade at sea was “a symbolic passage.”

Flags in the mast of the lead vessel and the following open multirole boat, however, were the official navy flags of Russia. Including the old Soviet-era naval flag.

The boat, normally used by Arktikugol to transport people and cargo between Longyearbyen and Barentsburg, is newly painted in red, white and blue, like the tricolor Russian flag. Previously, the colors of the boat were blue and yellow, like the Ukrainian flag. More than half of the population in Barentsburg are Ukrainians.

A recent revision of Russia’s Marine Doctrine included high stress on the use of civilian ships and infrastructure for military purposes, the Barents Observer reported.

“Considering the total hybrid war of the Collective West against our country, the unprecedented sanctions and the special operation [sic] in Ukraine, the strengthening of national security is relevant as never before,” Deputy Prime Minister Yuri Borisov said at a meeting.

In a short speech, Putin bragged about the navy’s new weapons, like the hypersonic Zircon cruise missile that Russia test-launched just west of Bear Island in the Norwegian sector of the Barents Sea on February 19th this year.

In August, the president signed Russia’s new Marine Doctrine, a document reflecting the position of a more assertive country in conflict with neighbors.

The doctrine highlights Arctic waters as a key priority for the country. As a matter of fact, the text mentions the word ‘Arctic’ a total of 66 times, more than twice as often as the 29 times in the 2015 version of the Marine Doctrine.

Zakharov also disapproved the visit to Barentsburg on September 30 by the Norwegian Coast Guard.

A Coast Guard vessel came to the waters outside the mining settlement “without any notification of the date and purpose,” Zakharova said and repeated her call on Norway to remember the principles and objectives of the 1920 Svalbard Treaty in regard to military restrictions.

Article 9 of the treaty prohibits naval bases and fortifications and the use of Svalbard for war-like purposes. The treaty, however, does not hinder Norwegian Navy or Coast Guard ships sailing the waters of Svalbard or making port calls to locations like Longyearbyen or Barentsburg.

Timofey Rogozhin, a former director of the Russian Grumant tourism company, finds it highly disturbing that people in Barentsburg celebrated with a naval parade simultaneously as the country’s military forces are killing Ukrainians in Ukraine.

Rogozhin left Barentsburg last year after political disagreements with officials from ministries in Moscow. He now lives in Longyearbyen, the Norwegian main settlement on Svalbard.

“Russian warships are shelling Mariupol, Nikolaev, Odesa and other cities,” he said to the Barents Observer.

“During my seven years in Barentsburg, I witnessed Russia transforming from totalitarianism to fascism,” Timofey Rogozhin said.

He calls on everyone at Svalbard to ask themself if such a parade with the Russian Navy flag during the war on Ukraine is a normal thing.

Mobilization and the economy: “Russia faces a quiet, incessant and slow degradation”

No return to pre-war reality when it comes to Arctic cooperation, says Finnish report