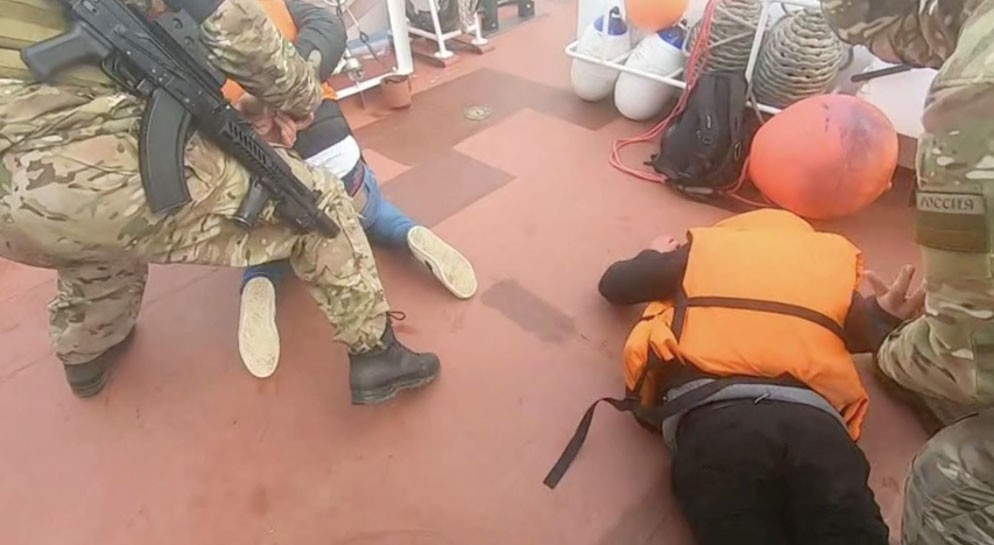 The three Syrians were taken over the FSB's Coast Guard vessel and handcuffed. Photo: Screenshot from the FSB video

The small rubber boat was supposed to bring them to Norway’s northern shores, but their dream of Europe ended dramatically in the Barents Sea as Russian security services in helicopter and boats forced them to stop after shooting warning shots.
Read in Russian | Читать по-русски
By

FSB has released a video showing the dramatic arrest of two Syrian citizens that last fall boarded a small motorboat in Devkina Zavod Bay in the Pechenga fjord and departed from the coast towards the maritime border with Norway.

The incident happened on October 8th, but first became known to the public last week as the verdict from the Pechenga District Court was announced, as reported by the Barents Observer.

The video shows how a helicopter and one of FSB’s Sobol-class patrol boats are hunting the small zodiac as it navigated out of the Pechenga fjord to the open Barents Sea.

The regional Murmansk edition of Komsomolskaya Pravda was first to publish the FSB video.

This is the first known attempt by migrants or refugees to reach Schengen Europe in a small inflatable craft via the freezing cold Barents Sea.

The boat with the two Syrians stopped and was soon after boarded by masked FSB officers.

As can be seen in the video, the two were dressed in jeans and sneakers. Both had a life vest.

A third man, which could not be seen on board the small craft at the time of arrest, turns up handcuffed at 0:51 into the video on the deck of the FSB vessel. He was dressed in a typical outdoor camouflage suit but didn’t wear a life vest.

In many ways, the arrest as presented in the FSB-video seems staged.

Maybe not too strange. The FSB has a tradition of letting criminals come as close as possible to carry out the criminal act before taking action. And then with a camera team onboard. There are at least three people filming the operation during the arrest.

FSB is also known for having a rather good overview of foreigners entering the Murmansk region, and especially those moving towards the border zone, that be towards Norway or Finland.

Liinakhamari (Devkina Zavod Bay) in the Pechenga fjord is the westernmost fjord on Russia’s Kola Peninsula and the only place between Murmansk and the state border were civilians can reach the coast without entering military restricted areas.

Liinakhamari is a restricted border area, but not under military naval authority.

At sea, the distance from Liinakhamari to the Russian-Norwegian border in Grense Jakobselv is some 35 kilometers (19 Nautical Miles). The video does not give a clear picture of the exact location of the arrest, but given the open water visible in the background, the arrest took place outside the fjord, in the Barents Sea.

In court, all three pleaded guilty as charged on conspiracy to get to Norway without proper permission and documents. Their visa to Russia had expired and they didn’t have a visa to Norway or any other Schengen countries.

Two of the Syrian citizens were sentenced to 10 months’ imprisonment in a penal colony, while the third has to spend eight months.

Border officials in Norway see the Syrians’ attempt to reach the country via the Barents Sea as a single incident.

Chief of Police in Finnmark, Ellen Katrine Hætta, says to the Barents Observer she doesn’t fear many more would try to cross the maritime border like the Syrians attempted last fall.

“I have the understanding that FSB border guards do a very good job in controlling the border,” Hætta says.

The Chief of Police, though, admits the information about the incident with the Syrians at sea outside the Pechenga fjord became known to Norwegian officials via media.

“I didn’t know this happened so close to our border,” Hætta says.

In Norway, it is the Police that is in charge of migration and external border control, but the Coast Guard can assist if getting authorization from the police.

Following the migrant crisis in autumn 2015, when some 5,500 people entered Norway from Russia in the north, there have been several attempts by third-country residents to make it over the 200 km long land border.

Especially during autumn 2017, many were arrested on the Russian side.

In September 2017, three Afghans were arrested. In August 2017, a Syrian citizen was arrested after he climbed through the barbed wire fence. In July, two other Syrians made it through the fence but were detained before they reached the borderline. In June, four Moroccans were arrested and in March, two Iranians were halted.