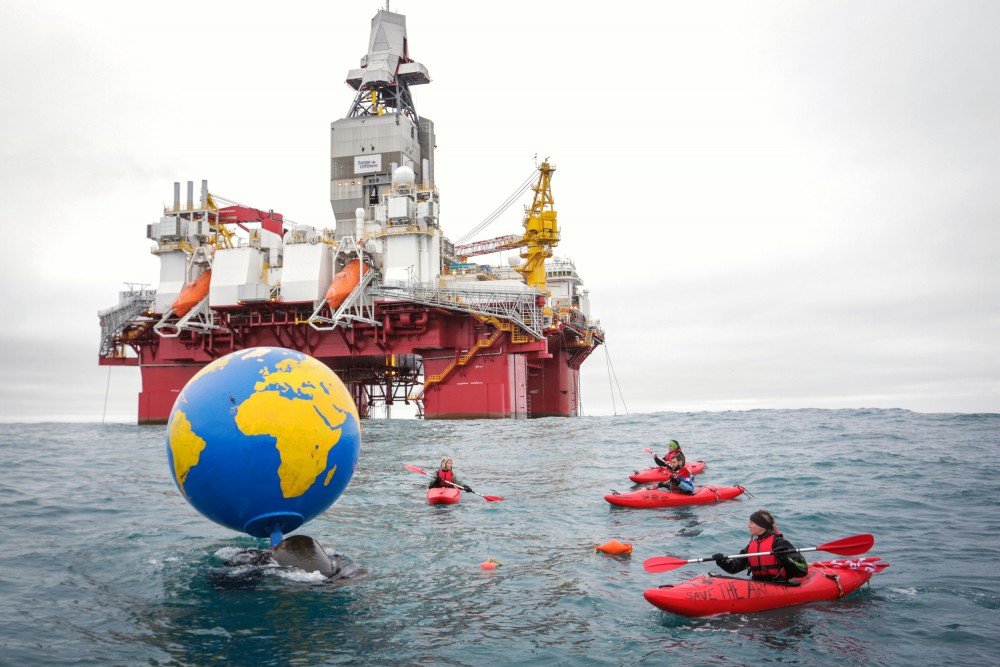 Activists from Greenpeace protesting inside the 500-meters safety zone around the rig «Songa Enabler» in the Barents Sea. Photo: Greenpeace

Six activists, including the captain of «Arctic Sunrise», have been fined for violating the safety zone around the Norwegian oil-rig in the Barents Sea.
Read in Russian | Читать по-русски
By

It was last Thursday the activists protested the Norwegian oil company Statoil’s drilling in the Barents Sea. With kayaks, some of the protesters went inside the 500-metres safety zone around the rig «Songa Enabler» at the Korpfjell prospect. Located 415 kilometres from mainland Norway, the drilling is the northernmost to be explored this season.

Truls Gulowsen, head of Greenpeace Norway, says the organization considers the arrest by Norwegian authorities to be unlawful as the protest was carried out in an area where the activists have a right to protest peacefully in accordance with the freedom of navigation act.

“The activists stand for what they did and are facing the consequences. They have acted peacefully and with the urgency necessary to protect the global climate that the Norwegian government is right now putting at risk with reckless oil drilling in the Arctic. This new aggressive search for oil is a violation of Norway’s Constitution and a completely backwards decision while the rest of the world is agreeing to phase out fossil to reduce global warming,” Gulowsen says to the Barents Observer after the activists and the vessel «Arctic Sunrise» were released on Monday evening.

«Arctic Sunrise» arrived in Tromsø on Saturday after the Norwegian Coast Guard, on request from the police, arrested the activists and towed the vessel to port.

Sharp contrast to 2013-arrest in Murmansk

Being released after a few days stands in sharp contrast to the treatment the crew and activists on board the very same Greenpeace vessel got after climbing on board and folding out banners at GazpromNeft’s drilling at the Prirazlomnaye field in the Russian sector of the Barents Sea in 2013.

Russian Coast Guard boarded and took over «Arctic Sunrise», towed the vessel to Murmansk where it was held in port for nine months. The 28 Greenpeace activists and two freelance journalists on board spent two months in prison, first in Murmansk and later in St. Petersburg before being released by amnesty.

Statoil disagrees with Greenpeace and says drilling in the Barents Sea is little different from the rest of the Norwegian continental shelf, where the company has been safely exploring for nearly 50 years. Statoil underscores that the world needs more energy than renewables can provide.

“Even in the two-degree scenario, more oil is needed. That’s why we’re exploring for more fields,” the company argues.

Statoil spokesman, Bård Glad Pedersen, says to the Barents Observer that drilling at the Korpfjell prospect continues, but it is too early to say if there will be a finding of oil.

“After Korpfjell, the rig will be moved to the Koigen prospect,” Glad Pedersen says.

Statoil’s drilling campaign is the most active in the Barents Sea ever.

So far, the partly state-owned oil company has disappointing results from the Barents Sea. The Blåmann well contained gas, but not oil in volumes like Statoil hoped for. Last week, the same was announced for the Gemini North well; a small gas discovery, but only minor non-commercial oil.