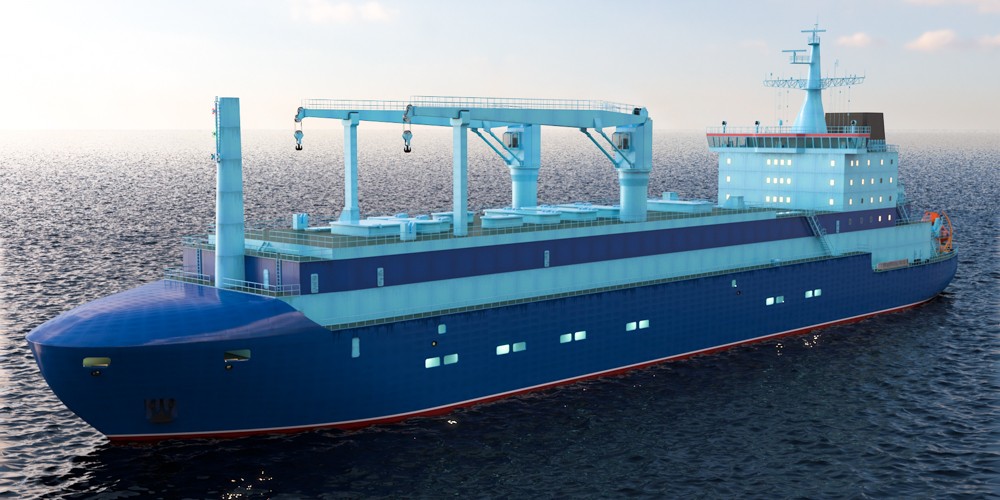 Iceberg Central Design Bureau in St. Petersburg has completed the technical design and says construction will take about five years.

Described as a multifunctional vessel for nuclear technology services, the 159 meters long ship will be able to sail all along the Northern Sea Route. That includes Pevek, the port town on the coast of te Chukotka Peninsula where Russia’s first floating nuclear power plant is supposed to be connected to the grid by the end of December.

«At the end of 2019, early 2020, we will transfer the documentation of the project to Zvezda shipyard. After that, equipment suppliers can begin to be chosen,» says CEO of Iceberg, Aleksandr Ryshkov, to the state nuclear corporations’ own newspaper Strana Rosatom.

He tells that the ship is designed to serve icebreakers and floating structures with reactors of the RITM-200, RITM-400, KLT-40 and OK-900 types.

RITM-200 are onboard the three new icebreakers currently under construction at the Baltisky Yard in St. Petersburg, the «Arktika», «Ural» and «Sibir».

RITM-400 are an even larger maritime reactor, planned for the giant Lider-class icebreakers og which Russia plans to built three by the year 2030.

Two other ships, the «Rosita» and «Serebryanka» are serving other missions, like transporting spent nuclear fuel casks from Andreeva Bay to Atomflot. «Serebryanka» has also served during military special operations, like when a crashed Burevestnik nuclear-powered cruise-missile was to be recovered from the sea-floor in the White Sea in August this year. That operation ended catastrophic.

The new vessel is about 30 meters longer than «Imandra» and has a draft at full displacement of 22,661 tons.

Equipped with two larger cranes, the new ship will be able to autonomously serve the reactor installations, like lifting out spent nuclear fuel casks from the «Akademik Lomonosov» and sail it back to Murmansk for loading onshore to railway wagons for further transport to Rosatom’s reprocessing plant in Mayak in the South Urals.

Normally, spent nuclear fuel are stored for a few years onboard the service ships before being transported by rail. As it seems from the drawings, the new vessel have at least eight compartments for storing spent nuclear fuel, but nothing is said about how many reactor cores there are space for in the compartments.