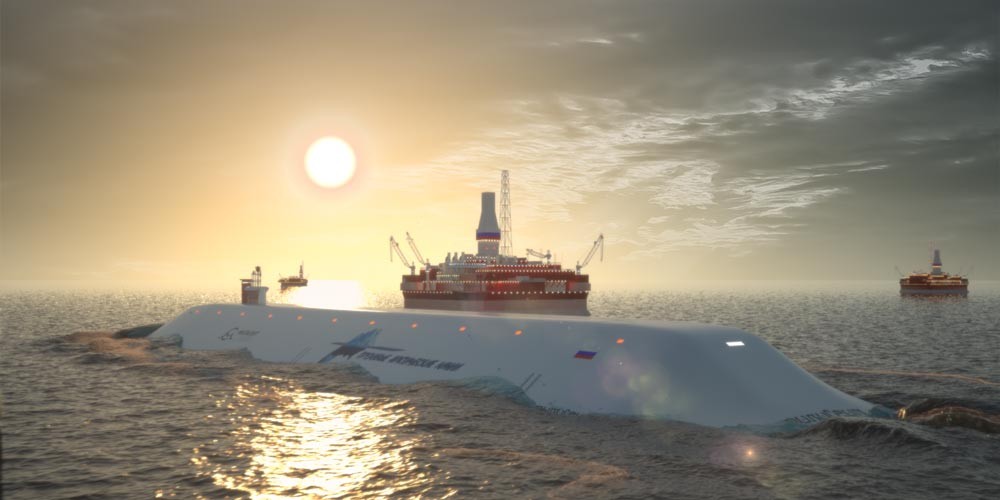 Sailing under the ice north of Siberia is cheaper than crushing through, a concept study concludes.
Read in Russian | Читать по-русски
By

“It will be unique, combining the functions of a nuclear-powered submarine and a gas carrier,” said Dmitry Sidorenkov, head of engineering with Malachite Design Bureau in St. Petersburg.

A nuclear-powered submarine gas carrier would provide year-around speedy transport from the fields to the transhipment points in Murmansk and Kamchatka.

It is Novatek, operator of Yamal LNG, that are planning for transhipment hubs in Ura Bay on the Kola Peninsula and on the coast of the Kamchatka Peninsula in the Far East. From the transhipment hubs, LNG would be transported by normal LNG tankers to the markets in Europe, North Africa, Middle East and Asia.

Sailing under the ice can be done regardless of climate and weather conditions.

“We see the demand for such vessel in the future,” said Sidorenkov.

Twice the size of a Typhoon-sub

360 meters length is the same as the pier at Sabetta, the LNG-plant operated by Novatek on the Yamal Peninsula.

The submarine tanker would be 70 meters wide, 30 meters high and have a draft of 12-13 meters. With a capacity of 170-180 thousand tons, the submarine would carry about the same as today’s surface tankers.

The world’s largest submarine today is the Soviet-designed ballistic missile carrier of the Typhoon class which is 175 meters long and 23 meters wide. The proposed LNG-submarine would in others words be more than twice the size of the Typhoons.

Unlike navy submarines, which have one or two reactors, the LNG-submarine would be powered by three reactors, providing 90 MW power to the propellers.

Dmitry Sidorenkov told Strana Rosatom that the reactors in question would be the RITM-200 type, similar to those on board Russia’s latest generation of nuclear-powered icebreakers of which the first, the “Arktika” was sailing a two-days test voyage outside St. Petersburg last week.

Malachite has already been in talks with potential customers, like Novatek and Gazprom, about the proposed submarine. Next step will be a full-fledged design.

It can take several years before the Arctic can welcome the first nuclear-powered submarine tanker. By 2024 to 2027 there could be five to eight such tankers in operation, sailing from the LNG-plants on and near the Yamal Peninsula to Ura Bay in the Murmansk region for westbound voyages and to Kamchatkha for reloading LNG aimed for the markets in Japan, China, South Korea and others.

The Malachite engineer estimates a crew of 25 to 28 to operate the submarine.

Atomflot, the service-base for nuclear-powered icebreakers in Murmansk could serve also such submarine tanker, Dmitry Sidorenkov suggested in the interview.

Nuclear power for exploring Arctic natural resources has good times in Russia after Rosatom last year became in charge of the Northern Sea Route Directorate, responsible for infrastructure and investments.

On Monday, the Barents Observer told the story about Rosatom’s plan for a nuclear-powered oil tanker for Arctic waters.

You can read more about the new generation of nuclear-powered icebreakers and other maritime, seabed and onshore reactors that will come to the Russian Arctic from now and until 2035 in this scenario-report published by the Barents Observer (pdf).