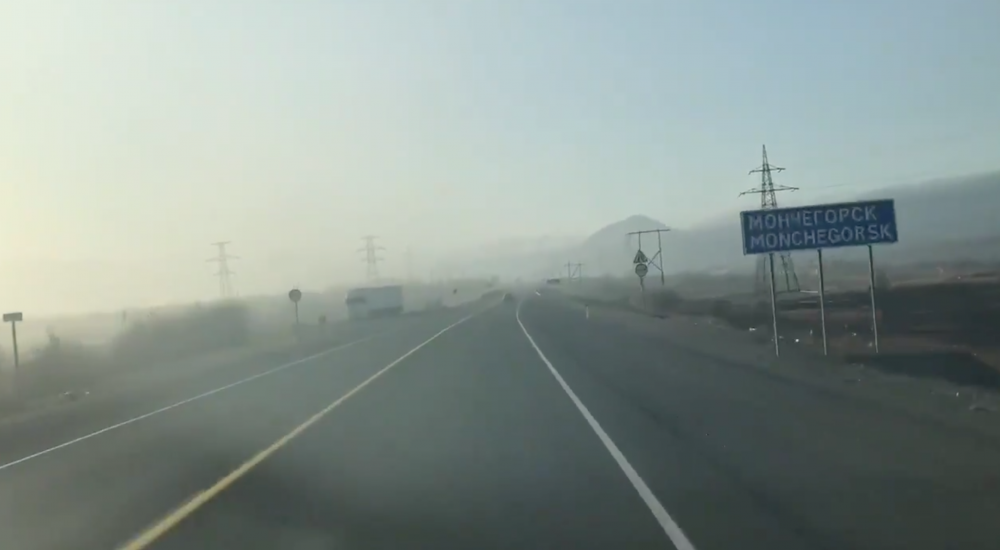 Sulfur dioxide smog covered the landscape around Monchegorsk on the Kola Peninsula on Sunday. Screenshot from video by Navalny's Murmansk office

Nornickel’s pollution cloud covering the fragile taiga forest on the Kola Peninsula comes only a few days after CEO Vladimir Potanin said a company that pays high dividends to shareholders must be able to spend serious funds on ensuring sustainable development.
Read in Russian | Читать по-русски
By

People driving the Kola highway have seen it before. Like in late July when kilometers and kilometers of the nature west of the nickel and copper smelters were covered by smog containing sulfur dioxide and heavy metals. A week later, the leaves on the few still-alive trees in the lunar landscape started to brown.

On Sunday, October 4th, the sulfur gasses were again blowing over the Arctic landscape, a video posted by Navalny’s office in Murmansk shows.

After Nornickel closed its nickel refining factory in Norilsk a few years ago, all refining now takes place in Monchegorsk, a two hours’ drive south of Murmansk on the Kola Peninsula.

Within a few months another of the company’s factories, in Nikel near the border to Norway, will be closed and production moved to Monchegorsk.

How big the concentrations of pollutants are in the air is not clear. Roshydromet’s monitoring stations are not located in the direction the wind was blowing this Sunday. The measurement posts are between the factory and the populated part of Monchegorsk town.

Before the weekend, Roshydromet sent a warning to the factory about unfavorable weather conditions for dispersion of air pollutants. Consequently, the agency called on Nornickel to be prepared and reduce emissions.

On Sunday, the wind direction was blowing away from the town.

Interviewed by Rossiya 24, CEO and main shareholder of Nornickel, Vladimir Potanin, elaborated in length about the company’s environmental actions and responsibility.

Potanin told about increased efforts to develop a technology to capture the sulfur. Stakes are high, technology is difficult, and investments already exceed 250 billion rubles (€2,72 billion), according to Potanin.

Big money, he admitted, but added: “a company that pays high dividends to shareholders must be able to spend serious funds both on investments in expanded production and on ensuring sustainable development.”

Potanin said Nornickel is, ideally, rebranding from being one of the main polluters in the Arctic to be a company that promotes a green economy.

The CEO boosted his personal fortune with $1,6 billion in 2019 and is now Russia’s richest beloved to hold a net worth of $19,7 billion, according to Forbes magazine.

Nornickel’s subsidiary on the Kola Peninsula does not reply to questions from The Barents Observer, but an email from the London-based boutique consultancy TMC, which oversees the English-language communications of Nornickel, says the company accepts full responsibility for any negative environmental contributions directly resulting from decades of industrial activities.

The email was sent The Barents Observer a week after an interview with a local Kola Saami, who called on electric vehicle company Tesla to refrain from buying Nornickel metals because of the company’s bad ecological records.

This is the full statement of the company:

Nornickel accepts full responsibility for any negative environmental contributions directly resulting from decades of industrial activities. We also hold ourselves accountable for any infrastructural deficits and poor decisions by personnel. Our utmost priority is to do everything to clean up our sites and instill a strong culture of transparency and safety in our workplace, to provide for the health of people living in the areas of our operations, of our workers, and of the surrounding environment, and to significantly curb our atmospheric emissions of SO2, which are at unacceptably high levels.

We have a roadmap for reducing pollution and restoring the environment. This roadmap comprises a wide breadth of projects, from replenishing fish populations to capturing and neutralizing sulfur dioxide through our unprecedented Sulfur Project. The Sulfur Project – one of Nornickel’s most ambitious environmental initiatives – is an innovative solution that transforms SO2 into sulfuric acid and gypsum. We developed this technique single-handedly out of our commitment to making a tangible change, having realized that none of the existing ‘over the counter’ sulfur capture and storage technologies were suitable for a project of this scale. Now that the groundwork has been laid and construction is underway, we are confident that the Sulfur Project will make a huge difference not only to air quality but also to local quality of life in the years to come.

We must also stress the extent to which we respect and value local indigenous populations and their cultural and environmental contributions, including their demonstrated sustainable lifestyle and their important perspective in our own journey towards sustainability. Nornickel has made tremendous ESG/CSR investments in the regions and cities of its operations over previous years, including to help indigenous populations, and will continue to do so in the future. Our intention is to drastically improve the standard of living and opportunities for all local populations.

The Russian indigenous people’s call on Elon Musk not to buy nickel from Nornickel got world-wide attention in media and social networks.

On September 25, Nornickel announced a 2 billion rubles, five-year, comprehensive support program for the indigenous peoples on the Taimyr Peninsula where Nornickel’s largest mines and factories in Talnakh and Norilsk are located.

The support-cooperation was signed as an agreement with three indigenous peoples organizations.