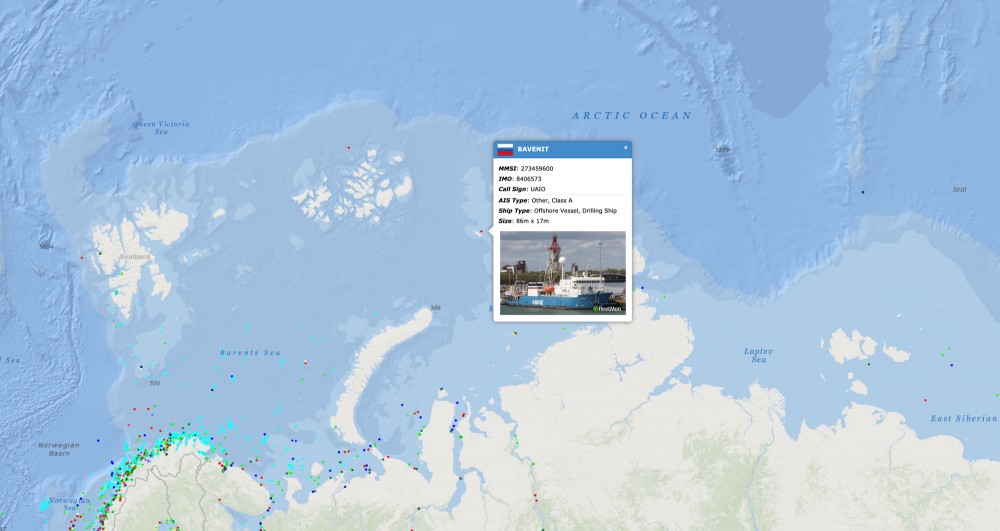 Never before has a well been drilled in these waters, says Rosneft as exploration vessel "Bavenit" moves into the northern Kara Sea.
Read in Russian | Читать по-русски
By

The ship that is operated by state geological exploration company Rosgeo in late October stayed for several days near the island of Vize in the northern Kara Sea, ship tracking information shows.

By 2nd November, the ship had moved east towards the archipelago of Severnaya Zemlya.

The expedition of the Bavenit is part of a comprehensive scientific program operated by Rosneft. It is the first time ever that drilling in these far northern shallow waters, according to state oil company.

The drill cores to be collected will be of great importance for the geological understanding of the northern Kara Sea, and will be carefully examined in the company’s laboratories.

Similar exploration has previously been conducted in the waters near Novaya Zemlya and Severnaya Zemlya, Rosneft informs.

The Bavenit is built in Finland in 1986 and is one of Russia’s most advanced vessel for shelf exploration and drilling. The ship has recently undergone a major upgrade that reportedly has made it capable of engaging in the northernmost parts of the Russian Arctic shelf. The ship on the 25th September left Murmansk with course for Rosneft’s Severo-Karsky license area.

In addition to the exploration of the Bavenit, Rosneft is currently doing hydrocarbon mapping also in the more eastern Laptev and East Siberian Seas.

According to the company, multipurpose vessel Kapitan Voronin is operating in the east Arctic waters with the purpose of preparing the ground for drilling of stratigraphic wells.

Rosneft has this year also engaged in exploration in more southern parts of the Kara Sea. In his meeting with President Putin in August, company leader Igor Sechin confirmed that he has two rigs drilling in the waters outside archipelago Novaya Zemlya.

Well drilling at the Vikulovskaya and Ragozinskaya started on the 22 July and was conducted by two rigs that had been towed to site from Murmansk, Sechin said.