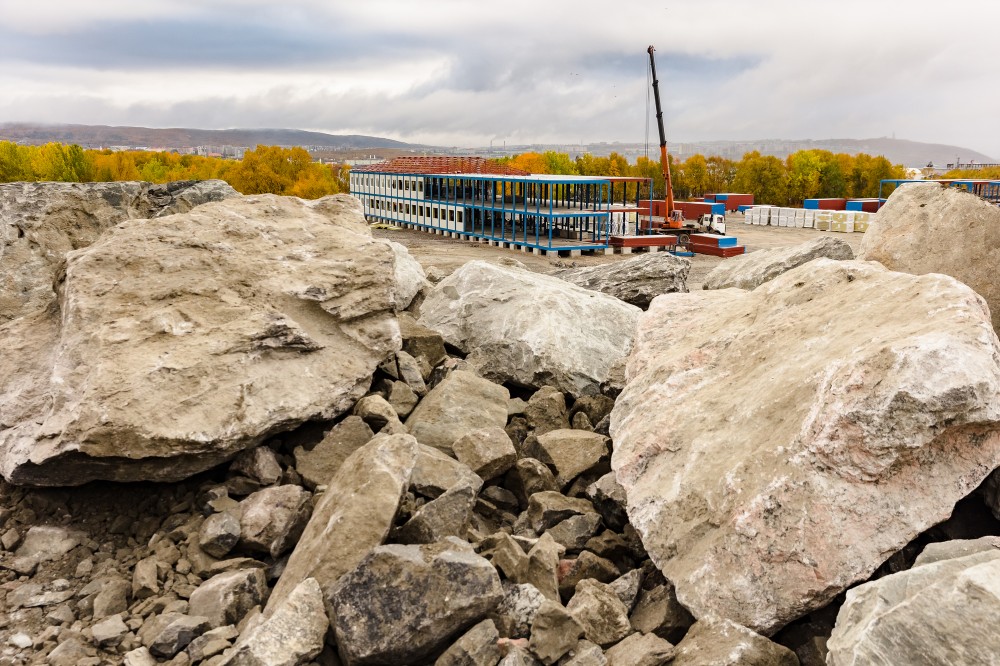 First, the camp for workers is to be built. Then, construction of the port facilities by the Kola Bay will start. Photo: Ministry of Information Policy of the Murmansk Region

After being paused for nearly a year, work is again underway at the Lavna universal port with a first aim to boost Russia’s coal export.
Read in Russian | Читать по-русски
By

Last fall, the entire construction project at Lavna outside Murmansk was said to be in jeopardy as Russia’s coal export to Europe declined sharply from 2019 to 2020. Building the railway line on the west side of the Kola Bay stopped, and little happened on the seafront.

But Europe’s green energy wave seems unsuited in the short-term to provide stable renewables to the electricity grid, so coal-fired power plants again get a boost. And so do global coal prices. At least for the winter to come.

Last week, excavators were again brought in, and the construction of housing for the workers that will build the port facilities is now in full swing.

Up to 1,000 people will in the peak construction phase be engaged on-site, according to the Government of Murmansk region. While the original plan said 18 million tons of coal would be exported from Lavna annually starting in 2022, the updated timeline now says the railway is to be completed by 2023 and full export output will come the following year.

Lavna coal export terminal is one of several large construction projects planned for the prestigious Murmansk transport hub. Visiting the site, governor Andrey Chibis said next step will be the Tuloma terminal, a port facility for transshipment of mineral fertilizers from the mining companies in Kovdor and Kirovsk on the Kola Peninsula.

Both fertilizer and coal are currently reloaded from railway to bulk carriers at two dedicated port facilities in the central harbor of Murmansk city. The new terminals under the Murmansk transport hub project are both on the west side of the Kola bay.

While most coal exported on ships from Murmansk until now has sailed west to the European markets, the regional government underlines that the new transport hub in the future also will facilitate shipping towards Asian markets via the Northern Sea Route.

In parallel to the coal terminal, plans do exist to build a port terminal for other types of cargo, including containers.

Rosatom chief Aleksei Likhachev in early August said “there is a huge interest in the international business community” to develop an Arctic transport corridor for containers. Rosatom has over the past years actively worked with plans for container shipments on the Northern Sea Route and create a new seaport in Murmansk connected to Russia’s railway network.

The state nuclear corporation’s subsidiary company Rosatomflot is currently in the process of building a fleet of five LK-60 reactor-powered icebreakers to replace the aging fleet of  Soviet-built vessels. In addition, the building of the first even larger Lider icebreaker is underway at the Zvezda shipyard in Russia’s Far East. A total of three Lider icebreakers are planned, with the first to set sail in 2027 providing for year-around shipping from Murmansk to Asia via the Arctic.

For Murmansk region, new port terminals are part of a larger industrialization plan intended to create up to 25,000 new jobs. Governor Andrey Chibis said in a statement on Monday that he has 141 different projects on his notebook to be implemented.

“First of all, these projects are new jobs for us,” the governor underlined. He is well aware that the largest construction project currently happening in his region, Novatek´s yard in Belokamenka for supporting the Arctic LNG, for the most has fly-in, fly-out commuters from Central Asian republics and China.