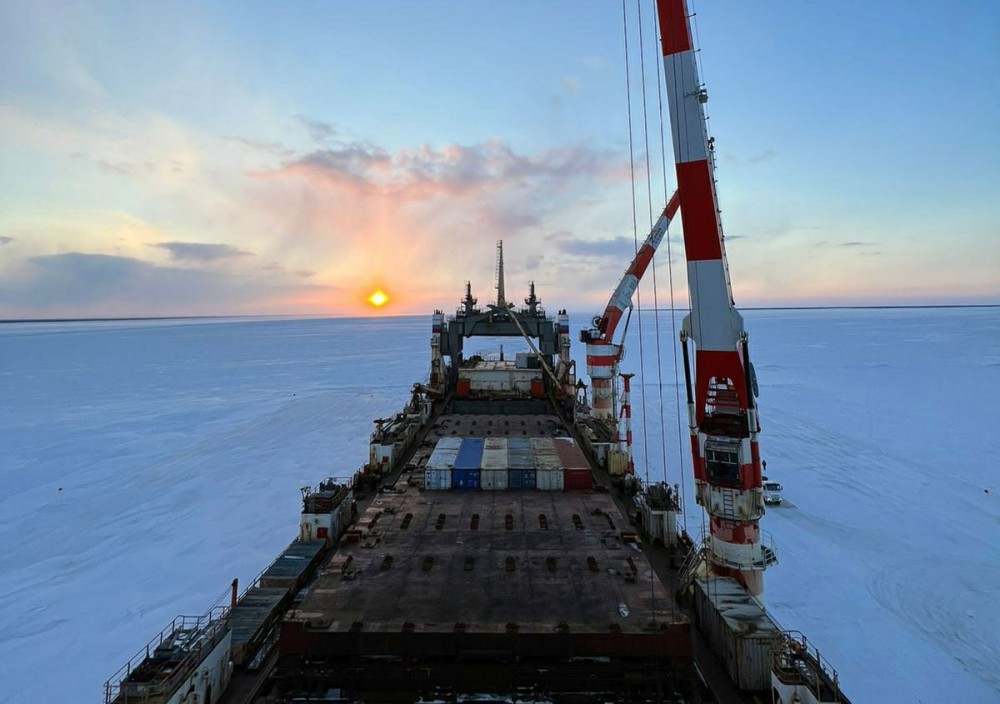 Nuclear-powered freighter Sevmorput continues to shuttle with construction goods to field development sites along the Yenisey River as part of Rosneft's Vostok Oil project.
Read in Russian | Читать по-русски
By

European countries are about to agree on an import ban on Russian oil as part of an upcoming 6th package of sanctions.

The restrictive measure will be a serious blow to oil-dependent Russia, whose oil industry until recently exported more than 2,5 million barrels per day to the EU.

But the looming threat of an EU embargo appears not to have made Russia’s biggest oil producer reconsider its biggest ongoing project. Rosneft today continues to ship big volumes of construction goods to the far northern Taymyr Peninsula.

The company has in the course of March and April made at least two major shipments to the area, both with nuclear-powered container carrier Sevmorput. According to ship operator Rosatom, each of the shipments included about 6,000 tons of goods, all of which was unloaded directly on the river ice of the Yenisey.

Judging from ship traffic data, the Sevmorput was on the 29th of April again heading out of the Yenisey.

The shipments follow several more deliveries made to Dudinka in the first weeks of 2022. In connection with one of those shipments, a company representative said that about 50,000 of construction goods are to be delivered to site in the course of winter 2022.

The Vostok Oil project is scheduled to produce more than 100 million tons of oil by year 2030, all of it to be shipped out through the Northern Sea Route to buyers in Europe and Asia. More than 700 km of trunklines are to be built on Taymyr tundra along with a major oil terminal on the coast of the Kara Sea.

It would be one of the biggest oil projects in the Arctic ever.

But the war against Ukraine could jeopardize it all. State-owned Rosneft is sanctioned by both the EU and USA, and the company is increasingly struggling to get financing for its activities. Key partner in the Vostok Oil project, oil trader Trafigura, has already made clear that it is reviewing its shareholding in the project.

Rosneft will ultimately also lose a key share of its export markets. The vast volumes that are planned to be extracted on the remote tundra of the Taymyr will soon be banned from the EU and other key markets. And the icy waters of the Northern Sea Route offers no easy access to China and other Asian countries.

The same challenge is now troubling also the other Russian oil companies. Among them is Gazprom Neft that produces a key share of its oil in the Arctic. The company is today continuing its exports from fields like Novy Port and Prirazlomnoye. But that could ultimately stop when EU introduces its oil ban.

That would mean a significant reduction in the tanker traffic that currently runs between terminals in the Gulf of Ob and the Pechora Sea and Murmansk, and further export routes through Norwegian waters to EU recipient countries.