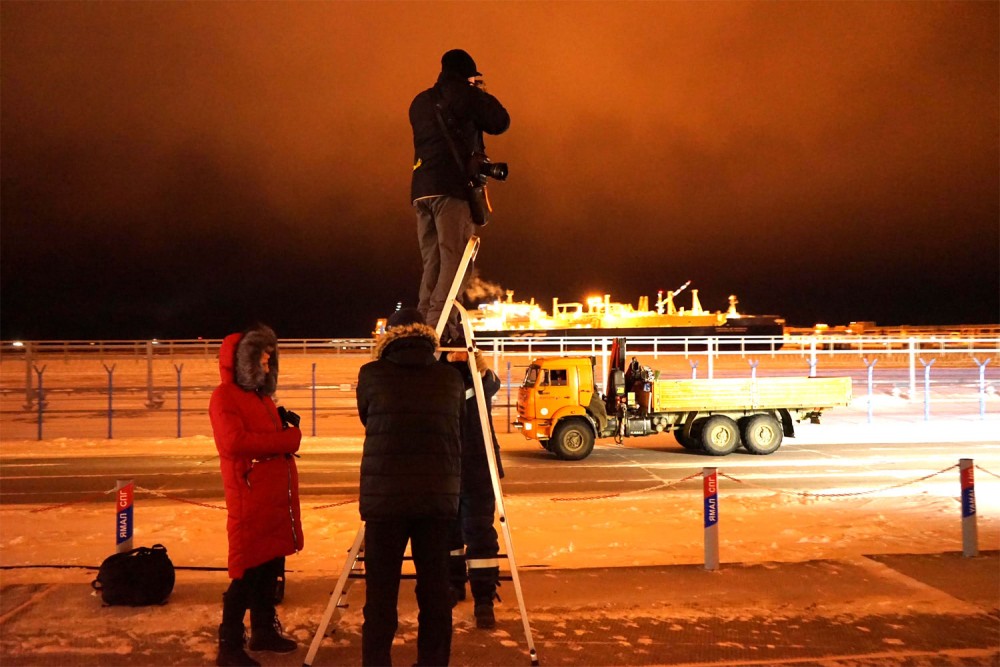 Sabetta is hub for the Yamal LNG project. It is built in cooperation with western partners. Photo: Atle Staalesen

Energy projects are put on hold and hyped ambitions for the Northern Sea Route increasingly look doomed. At the same time, the country is frozen out of international Arctic cooperation
Read in Russian | Читать по-русски
By

Moscow’s war against Ukraine is having a great toll also on one of the remotest part of the planet. The region that over the past years has been a top priority for the Russian government is now about to face a serious economic setback.

Several of the new oil and gas projects, mines and infrastructure initiatives that until recently have been under development might now come to a grinding halt.

Natural gas company Novatek this week confirmed that it will stop the development of its liquified natural gas projects in the region. It will only complete the first train of the Arctic LNG 2, company representatives told Kommersant.

According to original plans, the project’s first train is to come into production in 2023 and deliver 6,6 million tons of LNG to the market. The project train number two and three that were to be ready in 2024 and 2025 respectively will be postponed.

The announcement comes after French project partner Total made clear that it halts all new investments in Russia. Also other international oil and gas companies have made similar announcements. Among them are Baker Hughes, Halliburton and Schlumberger.

Novatek is fully dependent on Western technology to follow up its major Arctic LNG projects. Both the Yamal LNG and the Arctic LNG are built with foreign equipment provided by companies such as Linde, Siemens and Baker Hughes.

Ship traffic data indicate that there is still a high level of activity around the Arctic LNG 2 project port of Utrenneye. This week, two nuclear-powered icebreakers escorted cargo vessels to site.

Novatek has not responded to a request for comment to this report.

The new western sanctions against Russia will affect also several other industrial projects. State oil company Rosneft is in the process of developing what is due to become the biggest oil project ever in the Arctic, and is dependent on western technology to build both infrastructure and ice-class tankers. Also the investment basis of the project is now also increasing unclear as project partner Trafigura Group says that it is “reviewing its shareholding in Vostok Oil LLC.”

The Vostok Oil includes the building of 13 gas and oil fields in the remote Taymyr tundra and the annual production of more than 100 million tons by 2030.

On the Russian Arctic agenda is also the building of several mines, among them the Syradasaysky coal project in Taymyr. Also this project is dependent on western tech, at least for the building of ice-class bulk carriers that can export the coal.

Ship traffic data indicate that there is still a high level of activity around the project seaport of Yenisey, despite the difficult ice conditions in the area.

As industrial projects come to a halt, Russia will not be able to meet its ambitious plans for Arctic shipping. The objective set by President Putin in 2018 is the annual shipments of at least 80 million tons of goods on the Northern Sea Route by 2024.

The country’s Minister of the Far East and Arctic Aleksei Chekunkov during a visit to Murmansk in early March told local media that the objectives remain unchanged. But he appears to shut his eyes for the ongoing developments that is about to fully isolate Russia in international relations and trade.

It is now increasingly unclear also whether Russia will be able to meet its plan on nuclear icebreaker construction. The country intends to build a fleet of up to six LK-60 icebreakers in the course of the decade, as well as the super-powerful Lider. But the Baltic and Zvezda shipyards will hardly be able to complete construction without western technology.

In addition to the standstill in its grand industrial projects, Russia is also kicked out of the international bodies of regional cooperation. The country had great expectations from its two-year presidency in the Arctic Council and planned as many as a 88 various events.

It all wrecked with the invasion of Ukraine and the subsequent halt in international Arctic cooperation. On March 4th, the Arctic Council announced that it had decided to “pause all official meetings of the Council and its subsidiary bodies until further notice.”

The same decision was soon later taken by the Barents Council, as well as other regional cooperation bodies.