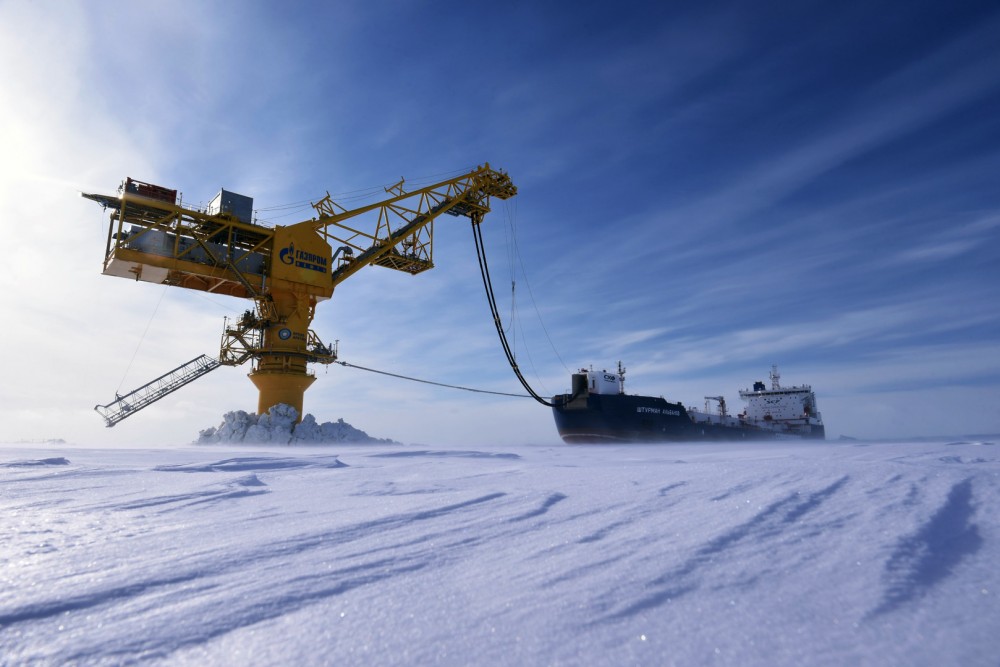 The Arctic Gate terminal in the Gulf of Ob is one of Gazprom Neft's key Arctic assets. Photo: Gazprom Neft

The EU's 6th package of sanctions will put a stop to millions of tons of oil shipped through Russian Arctic waters.
Read in Russian | Читать по-русски
By

When Russian oil company Gazprom Neft in 2016 launched its Arctic Gate terminal in the Gulf of Ob, it seemed beyond imagination that Russian oil only few years later would be barred from the EU. The new infrastructure built in the harshest Arctic climate had the capacity to deliver more than ten million tons of oil per year and was designed for exports to European consumers.

It was not the only new Arctic project of Gazprom Neft. Few years earlier production had started at Prirazlomnoye, the offshore field in the Pechora Sea. In addition came the Messoyakha fields and several more projects. A big fleet of ice-class tankers brought the oil from the Arctic installations to a large terminal tanker in the Kola Bay near Murmansk.

In 2020, the company exported more than 18 million tons of oil through the Umba terminal tanker in Murmansk. Conventional tankers subsequently brought the oil to Rotterdam and other European ports. And there were plans for much more. In the course of the next decade, Gazprom Neft intended to build new Arctic port infrastructure capable of handling up to 40 million more tons of oil, all of it to be exported through Arctic waters.

And the company was not alone. Lukoil exported more than eight million tons from its Varandey terminal on the Pechora Sea coast. And Rosneft was in the process of developing its giant Vostok Oil that reportedly was to produce more than 100 million tons by 2030, all of it to be exported through the Northern Sea Route. In addition comes the many million tons of oil sent by railway to the Kola Peninsula and exported from the Murmansk Sea Port.

On the 30th of May, the European Council adopted a 6th package of sanctions, which has its prime aim on the Russian oil industry and its vast cash flow to the Russian treasury and war machine.

According to the new restrictions, Russian oil exports to European countries are to be banned. By the end of 2022, Russian crude oil, as well as petroleum products, will be barred from entering the Union. A temporary exception is given only to pipeline oil.

The new sanctions will have devastating effects on the Russian oil industry, and especially operations dependent on shipments to EU terminals, like the oil from the Arctic. The Russian energy sector is from before hard hit by sanctions. In previous packages, Russian coal has been banned, and Russian companies are no longer allowed to import key technologies needed for industrial projects, among them LNG plants.

The ban will force Gazprom Neft, Lukoil and Rosneft to look for new export routes and markets for their Arctic oil. All companies will see Asia and especially China as a prime target. However, the opening of new logistics chains will not come easy. The companies can send the oil eastwards on the Northern Sea Route. But the complicated sea-ice conditions will be a constant threat to the tankers.

Moscow has over many years had big expectations for year-round shipments on the Northern Sea Route. But the capricious ice has once and again complicated shipments. In the fall of 2021, a big number of ships got trapped on the route following an early freeze of the waters. The situation created a dangerous situation for the ships involved, as well as for route operator Rosatom.

Russia has grand plans to build a super-powerful fleet of nuclear-powered icebreakers that can provide smooth shipping in the area, even in the most icy parts of the year. However, the international sanctions are now jeopardizing also the plans of the country’s shipbuilding industry.

Rosneft might have made a major discovery in the Pechora Sea