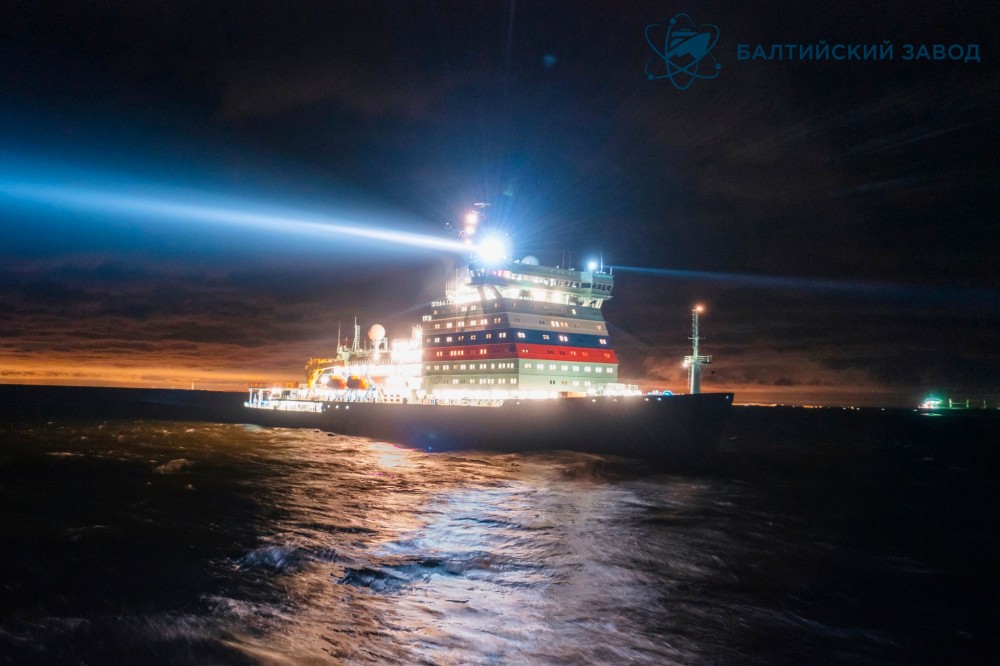 The "Ural" is the third LK-60 nuclear powered icebreaker built by the Baltic Yard. It could end up working primarily for oil company Rosneft. Photo: Baltic Yard

The 173 meter long nuclear powered icebreaker has completed sea trials and is soon ready to head north to Atomflot, the nuclear icebreaker base in Murmansk. The Ural is Russia’s third vessel of the LK-60 class (project 22220), and the second in serial production.

The Russian flag was raised on the ship in a ceremony on Tuesday this week, marking its readiness for operations. The ceremony took place at the Baltic Yard in St.Petersburg in the presence of high-ranking dignitaries from the Russian government and shipbuilding industry.

Present in the ceremony was also Vladimir Putin on a video link from his residency outside Moscow. The ship is expected to be handed over to its new owner in the course of the next few weeks.

However, the operational area of the new powerful icebreaker might differ from its two sister ships Arktika and Sibir.

In a comment to news agency PortNews, Arutyunyan confirms that the Ural is “basically contracted by Vostok Oil.”

Glavsevmorput is the subsidiary of state nuclear power company Rosatom responsible for operations on the Northern Sea Route.

The contract with Rosneft could seriously affect’s Rosatom’s ability to keep the remote Arctic waters open for shipping this winter. Vladimir Arutyunyan admits that there are too few icebreakers available.

“There is an insufficiency of icebreakers, a deficiency,” the company leader underlines. In order to compensate for the lack, Glavsevmorput might have to hire several diesel-engined icebreakers from state port company Rosmorport.

The LK-60 is the world’s most powerful class of icebreakers. It can operate in up to three meter thick sea-ice and sail with a speed of 12 knots in 1,5 meter thick ice.

A total of seven vessels of the class are projected. Two of them are under construction at the Baltic Yard. On the same day as the flag raising took place at the Ural, sister ship Yakutia was put on the water in a nearby ceremony.

Oil company Rosneft is in great need for icebreaking services in connection with the Vostok Oil.

Over the next year, hundreds of thousands of tons of construction materials and goods are to be delivered to the project construction sites along the Yenisey River.

Construction works were launched in early 2021, and in late May that year, two ships set ashore about 20,000 tons of constriction materials on the ice of the Yenisey Bay. Since then, big works have been undertaken on site.

In course of summer of 2021, a total of 15 ships reportedly delivered 145,000 tons of construction materials to the remote coast. By late November, about 220 workers and 100 pieces of machinery were busy with the building of a 1,300 meter long terminal mooring site and working village.

The Sever Bay terminal will be one of the biggest of its kind in the whole Arctic.

Rosneft is under major time pressure. Company CEO Igor Sechin has underlined that the project already in 2024 will produce at least 30 million tons, and as much as 100 million tons six years later.