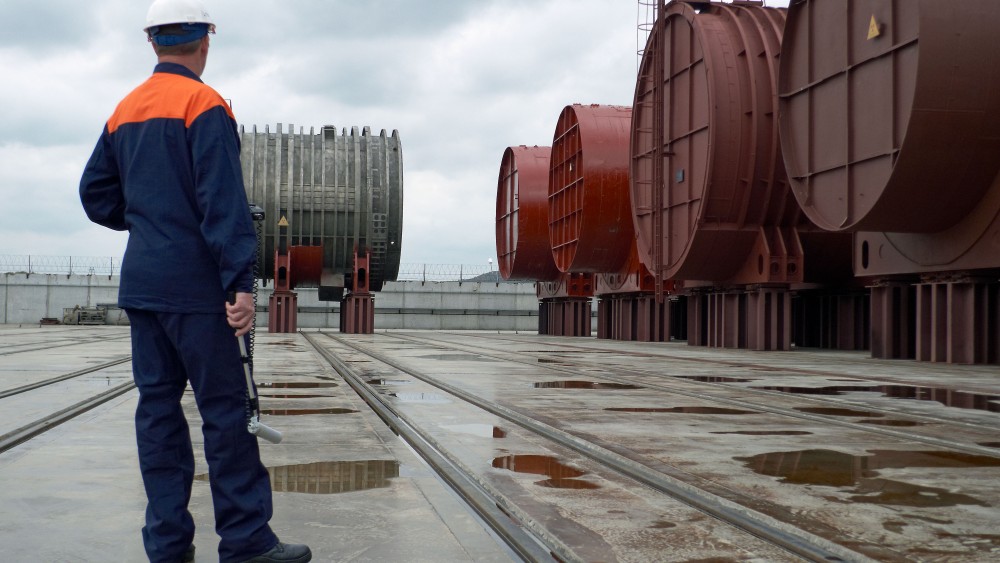 Worker with a radiation detector at the storage pad for reactor compartments at Saida Bay. The storage site is paid by western donors and Norway contributed with grants to cut a few Cold War submarines so the radioactive contaminated compartments could be stored safely onshore here on the Kola Peninsula. Photo: Thomas Nilsen

No grants - no cooperation: After giving more than €200 million over the last 27 years to help Russia secure its nuclear dump sites and improve safety at icebreakers and power plants, Rosatom this week closed the door for further cooperation with Norway.
Read in Russian | Читать по-русски
By

Rosatom’s representatives on Tuesday informed that Norway is no longer welcome to participate in projects until recently financed by Oslo.

Following Russia’s unprovoked massive military attack on Ukraine in February, Norway froze all financing to nuclear safety projects agreed under the joint commission between the two countries. This is said to be the main reason why Russia now replies that no pay means no access.

However, contact channels, emergency preparedness and information sharing were underlined to continue.

Some of the largest run-down dump sites for radioactive waste and spent nuclear fuel from Soviet-era submarines are stored some 60 kilometers from the land border with Norway. Russia and its western neighbor share coastline to the Barents Sea and have a common interest in avoiding radioactive leakages to the marine environment.

“Nuclear security cooperation between Norway and Russia is a key dimension in our bilateral relationship. It is in our common interest to reduce the risk of accidents and radioactive contamination,” the Foreign Ministry in Oslo said in a statement after the meeting.

Happening online on May 31, the meeting was the 25th annual of the Norwegian-Russian Commission on nuclear safety.

Previously, a State Secretary with the Foreign Ministry has headed the Norwegian delegation in the Commission. This meeting, however, was led by Director of the Radiation and Nuclear Safety Authority (DSA) as Norway no longer maintains political contact with Moscow.

“We will continue the dialog with Russian authorities on nuclear safety issues important for own preparedness, and to reduce the risk of accidents and radioactive pollution,” said Director Per Strand.

The two countries have an agreement to notify each other in case of accidents that could lead to cross-border radioactive contamination. Russia, though, has never informed Norway about any accidents involving military reactor installations, that be the deadly fire on the nuclear-powered special mission submarine Losharik in July 2019 in waters outside the Kola Peninsula. No information was neither given when a nuclear-powered weapons system exploded in the White Sea later the same year, killing five Rosatom experts and sending a cloud of radioactive gasses over the city of Severodvinsk.

The Norwegian delegation expressed deep worry for the safety at Ukrainian nuclear power plants after Russia launched the war on February 24 and started to shoot at buildings of the Zaporizhzhia nuclear power plant while the reactors were in operation.

The spent nuclear fuel storage in Andreeva Bay is one location where the doors are now closed for Norwegians. The storage site across the bay from the submarine base in Zapadnaya Litsa still holds some 10,000 spent nuclear fuel elements stored in run-down concrete tanks.

The first shipment of spent nuclear fuel out of the storage took place in 2017, an event attended by Norway’s then Minister of Foreign Affairs, Børge Brende. The following 5-years period saw a removal of the non-problematic fuel elements, first by ship to Murmansk and then by train to the reprocessing plant in Mayak near Chelyabinsk. Much of the work is paid for by Norway.

Now, however, remains the most challenging work in Andreeva Bay: the damaged elements where experts fear accidents could happen during lifting and re-packing into new containers.

Exchange of information was discussed at the Commission meeting, but no details on how the progress will be followed up were provided.

Naturvernforbundet (Friends of the Earth Norway) is an organization that has followed the nuclear safety work in Russia for years in cooperation with local non-governmental groups. This year, the group decided to stay away from the meeting in the Commission.

While it was work by non-governmental organizations (NGOs) that in the 1990ties triggered national authorities’ attention to the urgency of nuclear safety in the north, these groups have few options to maintain a watchdog position under the current totalitarian rules in Russia.

The Kremlin’s crackdown on civil society aimed to cripple NGOs with foreign patrons or partners intensifies. Consequently, most environmental groups have shut down or abandoned their work.

As Russia’s war in Ukraine intensifies, so has defiance back home causing scared, hopelessness and silence. Protesters are jailed and many have moved to exile.

“Long-term repression of Russian civil society is one of the explanations for how this war became possible,” said Kjersti Album with Naturvernforbundet. “We have seen a steady deterioration since 2000, especially so since 2015”, she adds.

Naturvernforbundet has over the years together with local environmental NGOs in the Murmansk region, as well as in Moscow and St. Petersburg, published several studies on how older nuclear power plants can be safely decommissioned when shut down.

“Today, those who actively criticize the authorities, that be environmentalists, journalists or media companies, even individuals, can be branded as “foreign agents”, Kjersti Album said.

“People risk 15 years in prison for talking publicly about the war.”

Radioactive time bombs will be lifted from ocean floor in 2030

Construction of Kola NPP-2 set to start in 2028