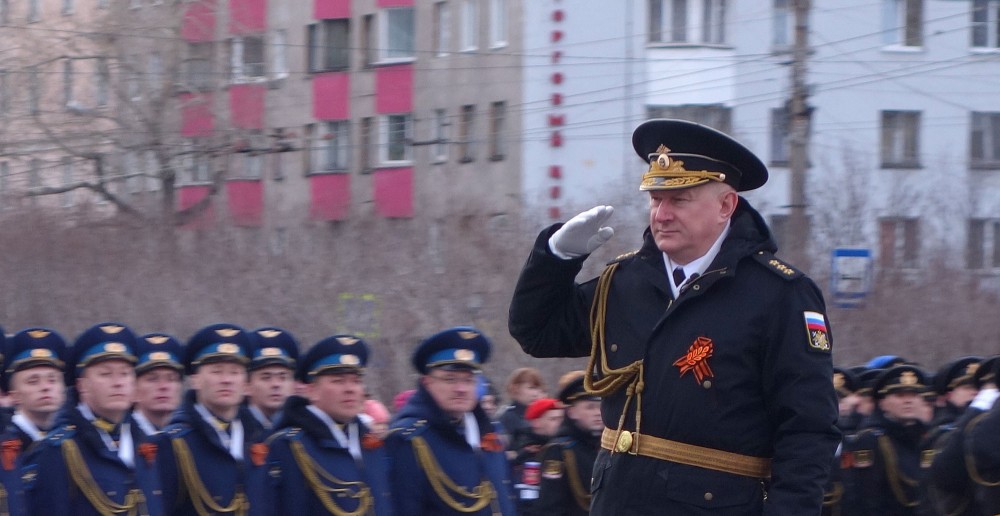 This year has been packed with exercises, Northern Fleet Commander Nikolay Yevmenov underlined in his sum-up of 2018.
Read in Russian | Читать по-русски
By

«This year has been full of events of military and operational preparedness,» the fleet Head Commander underlined as he on 14th December met with journalists.

According to the admiral, the powerful fleet has in the course of 2018 conducted a total of 148 exercises. The number rocket shootings totals 157. That is a 10 percent overfulfillment of the plan, Yevmenov underlined.

Also the number of days of sailing with submarines and surface vessels is far above plans, respectively 36 and 86 percent. «This has allowed us to efficiently prepare the crews to resolve their missions, the commander underlined.

Yevmenov especially highlighted the Northern Fleet expeditionary missions to archipelago Novaya Zemlya and the two major transit voyages of naval vessels on the Northern Sea Route, during which the first ever launch from a Bastion missile complex was conducted from the New Siberian Islands. He also mentioned the multiple launch of bulava missiles from sub “Yuri Dolgorukii”, as well as attack submarine “Severodvinsk’s” launch of a missile from the White Sea.

The powerful fleet commander in his press conference did apparently not touch on issues of the major buildup of bases in the Arctic archipelagos, including the establishment of a new base in Tiksi, on the coast of the Laptev Sea. The new Tiksi base will stand ready for operations already early 2019. It will include a total of 11 buildings, all of which will be interconnected with roof-covered passages. The buildings will house living quarters for soldiers, an administrative unit, a diesel-fueled power station, water and fuel storage facilities, a cantina, garages and more, the Northern Fleet informed.

The high activity level will continue in 2019, Yevmenov makes clear. In the new year, a series of exercises will be conducted in the Arctic, both on land and at sea. He also makes clear that new nuclear-powered «Knyaz Vladimir», a Borey-class ballistic submarine, and the «Kazan», a multipurpose attack sub, will be included in the Northern Fleet.

Comprehensive testing of both new vessels will take place in 2019, he says.

Admiral Yevmenov has on several previous occasions underlined that the ongoing militarization should not be an issue of concern for Russia’s Arctic neighbors.

«The activities of the Northern Fleet is conducted in strict coherence with the principles and norms of international law that applies to the Russian sector of the Arctic,» he said following the laugh from the Bastion mission complex in Kotelny in September. «They are not aimed at third countries  with national interests in the waters of the Arctic Ocean.»

Russia has over the last years bolstered its Northern Fleet with a wide range of new missiles. In 2015, the country moved the S-400 Triumph, the new generation anti-aircraft weapon system, to the Kola Peninsula. That was followed by the deployment of the Bastion mobile coastal missile systems in 2016.

The Northern Fleet is the by far most powerful of Russia’s five fleets. It includes about 30 submarines, among them Borei-class ballistic missile submarine, as well as powerful surface vessels, including battle cruiser «Pyotr Veliky» and aircraft carrier «Admiral Kuznetsov».