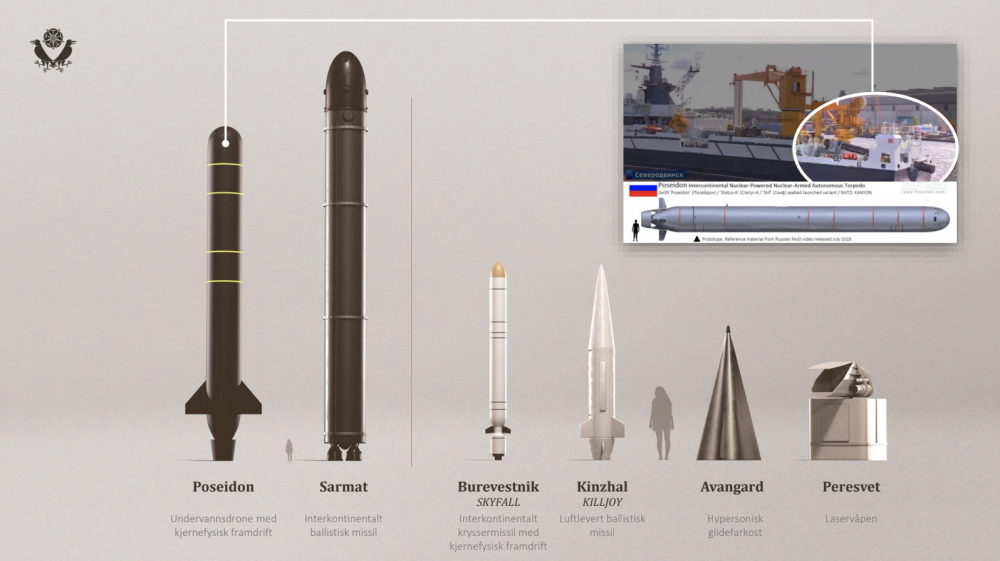 The new missiles and weapons systems under development in Russia. The Poseidon and Burevestnik are both powered by a small nuclear reactor. Illustration by the Norwegian Intelligence Service

“We should expect development and testing of new, advanced weapons systems in the areas east of Norway. Several of these will have nuclear propulsion systems,” said Director of the Norwegian Intelligence Service, Lt. Gen. Morten Haga Lunde.
Read in Russian | Читать по-русски
By

On Monday, the Lieutenant General presented the Intelligence Service’s annual report with threat assessments to Norway’s national security. In a speech for Oslo Military Society, Morten Haga Lunde elaborated on the facts and figures of Russia’s military build-up in the north.

The report points to 19 people killed as a result of military activities in the Russian north near Norway.

Those 19 mentioned in the intelligence report are likely the 14 men killed in the fire on board the Losharik special purpose submarine on July 1 and the five Rosatom experts killed as radioactivity leaked out in the explosion during recovery of a Burevestnik missile from the seabed of the White Sea on August 8.

The lethal fire on the Losharik submarine happened in the Motovsky Bay off the coast of the Kola Peninsula. The submarine, specially designed for secret seafloor operations, belonged to GUGI, a special unit of deep-sea military submarines and surface vessels located in Olenya Bay. The units’ missions are highly secret and there are still a lot of questions-marks on what the Losharik was doing when the fire started.

In regards to the Burevestnik explosion, much more information is available in the public domain. The missile is one of the new weapons systems highlighted by President Vladimir Putin’s speech to the nation in 2018.

Powered by a small nuclear reactor, Burevestnik (named Skyfall by NATO) is a cruise missile with nearly unlimited range. If it works. The missile has been tested several times at the northern test range at Novaya Zemlya, but all those tests might have failed as the reactor didn’t start after launch.

Last winter, the missile was launched from the Nenoksa naval test range west of Severodvinsk on the southern coast of the White Sea. What happened during the test is unknown, but during recovery a few months later, it all went wrong.

Radiation leaked out and peaked at 2 µSv/h at the monitors in Severodvinsk, a town of 190,000 inhabitants some 25 kilometers from the barge where the explosion took place.

Russian defense ministry’s attempts to cover up and keep secret the leakages of radioactivity were heavily criticized in Russian media, as more and more photos and videos appeared on social media showing the victims transported in helicopters and ambulances by emergency services personnel in radiation protection suits.

For Norway, neighboring Russia in the north, testing of such reactor-powered weapons systems are worrisome.

It is not known where the testing of the nuclear-powered underwater drone takes place, or what kind of cooling system the small reactor is equipped with in order to prevent radioactivity from leaking out to the marine environment during tests.

Norway’s radiation measurement station at Svanhovd, close to the border to Russia’s Kola Peninsula, has several times over the last few years detected small tiny amounts of radioactive iodine-131 and Cobalt-60 in the air, although the sources of the isotopes have remained a mystery and can’t be traced back to any weapons testings in northern Russia.

Last December, the Arctic Council established a dedicated expert group on nuclear emergencies, but since the council does not involve in military matters it will not keep any special eye on possible future testings of Russian weapons with nuclear propulsions in the Barents- and White Seas.