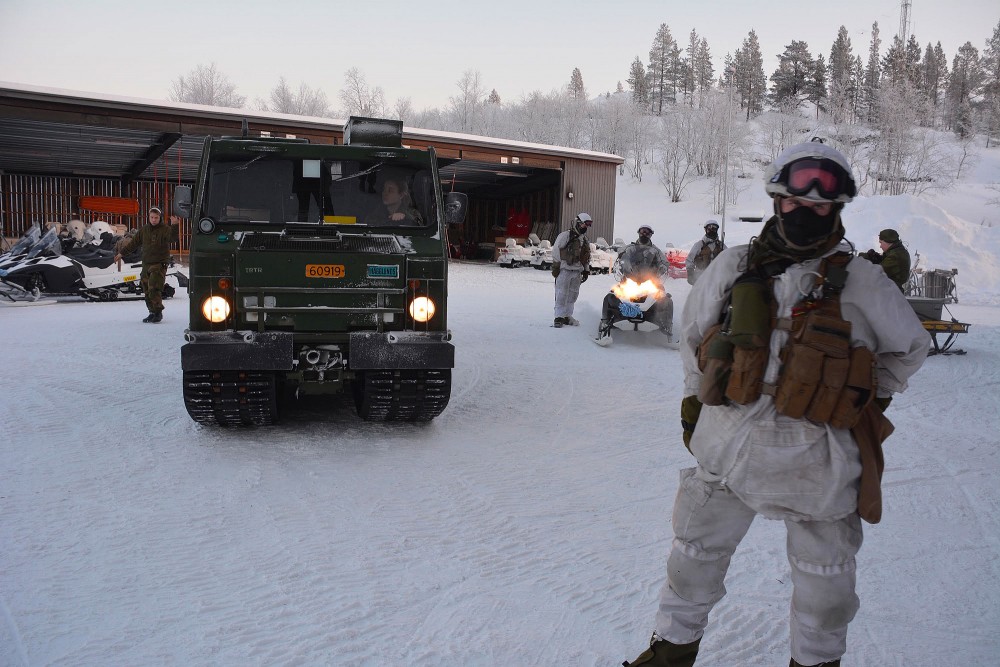 Temperatures were dropping to below minus 20 degrees celsius in parts of northern Norway as up to 16,000 troops from ten countries on 2nd March started the Cold Response 2020.

It is Norway’s biggest allied exercise and the country’s Armed Forces have been preparing intensively for months.

For sixteen days military men and women backed by heavy hardware will fight their way across deep snow and harsh climate conditions. For Norway, cold weather fighting is considered field of top expertise and the country has made Arctic operations its special contribution to NATO.

According to the Norwegian military, the main purpose of the Cold Response 2020 is to conduct «multinational joint exercises with a high-intensity combat scenario in demanding winter conditions.»

The training ground covers major parts of northern Norway, except areas close to the Russian border. A key role in the drills are given to the newly formed Finnmark Land Defense, a unit based in Porsanger.

These forces, along with supporting troops from the Sør-Varanger border guards, as well as units from the Finnish, Swedish and British armed forces, will play the role as attacking enemy in the exercise scenario.

The «attacking» forces will advance on the Brigade North, the more south-based troops that subsequently will request support from NATO units.

«This is a milestone in the build-up and development of the Finnmark Land Defense,» says Jan Marius Nilsen, Head of the country’s Border Guards.

The Finnmark Land Defense has been a key priority in the development of Norway’s Arctic capacities. By year 2022, a full-fledged cavalry battalion with about 400 soldiers will be based in Porsanger, the military base located near the town of Lakselv in northern Norway.

Included in the military buildup is also a new 200 soldiers strong Ranger Company at the Garrison of Sør-Varanger, based on the border to Russia.

Included in the drills are heavy military hardware, including ships, aircraft and armored vehicles and tanks.

The exercise was originally to include a bigger number of American troops. However, up to 3,000 U.S. soldiers were ultimately instead sent to engagements in the Middle East.

The Cold Response 2020 still includes a significant number of Americans that will engage alongside Norwegians, British, Dutch, German, French, Danish, as well as Swedish and Finnish troops.

The number of foreign forces will total about 6,000.

Russia has on repeated occasions expressed dislike with the bi-annual NATO exercise and has explicitly displayed its presence in the region ahead of the drills.

On February 26th and 27th, two Tu-142 planes from the Russian Northern Fleet flew far south along the Norwegian coast.

The planes came out over the Barents Sea north of the Kola Peninsula, continued to west of the North Cape before heading south deep into the so-called GIUK gap (Greenland-Iceland-UK), the area in the northern Atlantic that forms a naval choke point.

Russia has also carefully planned its own exercise activity to match with the NATO training.

In the last days of February, the Northern Fleet conducted combat training at the Shary shooting range just few kilometers from the border to Norway