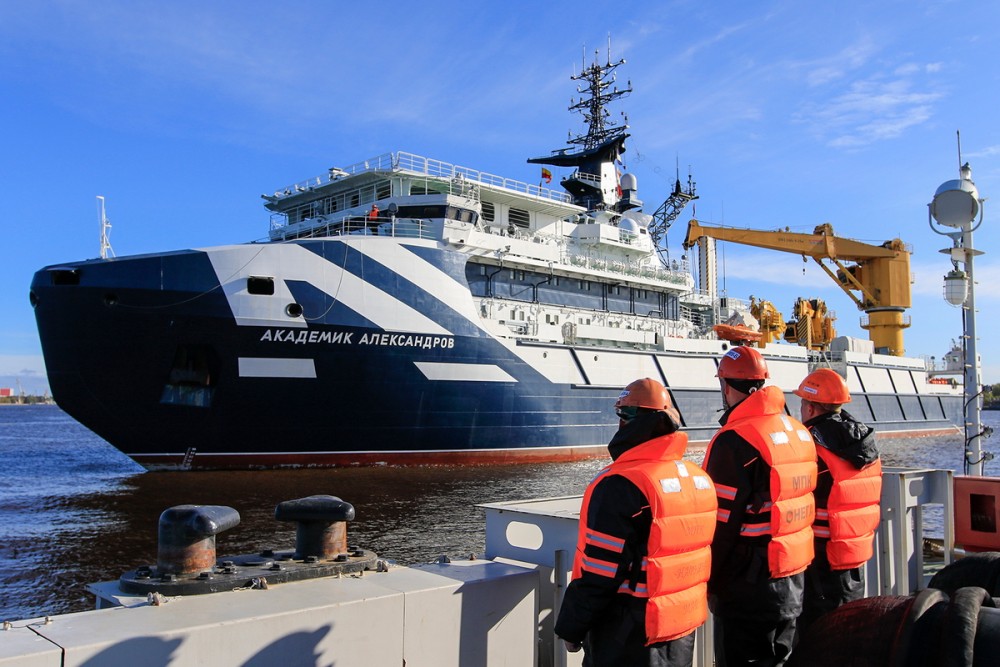 "Akademik Aleksandrov" arriving port in Severodvinsk by the White Sea after her first long-lasting voyage in Arctic waters. The ship belongs to the Main Directorate for Deep-Water Research (GUGI) of Russia's Ministry of Defense. Photo: Press service of the Northern Fleet

The ship "Akademik Aleksandrov" is closely linked with testing of Russia's disruptive nuclear-powered underwater drone and the top-secret Harmony system of underwater sensors.
Read in Russian | Читать по-русски
By

“The crew has conducted scientific and practical research in the waters of the Arctic Ocean,” is all what the press service of the Northern Fleet has to say when posting a series of photos from the ship’s return to port at Belomorsk naval base in Severodvinsk this week.

Greeted by high ranking officers and the navy orchestra highlight the importance of this first voyage by “Akademik Aleksandrov”.

The ship, though, is sailing missions for the Main Directorate of Deep-Sea Research, often referred to as GUGI, a structure reporting to the Ministry of Defense.

GUGI is one of the most secret units of the Russian Armed Forces  and operates deep-diving, nuclear-powered, mini-submarines like the Losharik that caught fire last year, killing the crew of 14.

The 96 meter long ship was handed over from the shipyard in Severodvinsk in March this year. A source in the Russian shipbuilding industry confirmed to news agency TASS that the scarce information about the handover was connected with the fact that the vessel is built on an order from the Main Directorate for Deep-Sea Research.

“Akademik Aleksandrov” is equipped with three cranes, the largest is capable of lifting up to 100 tons. It was the object attached behind this crane that draw attention when the regional TV news Vesti Pomoriya last year had a story about the vessel’s test sailing in the White Sea. The video was soon posted on YouTube, from where it later was removed.

By then, a few observers had already made screenshots from the video showing the Poseidon nuclear-powered doomsday-drone onboard. Defense analysis site Covert Shores posted several of the photos, showing how “Akademik Aleksandrov” is specially fitted to work with the drone.

“We should expect development and testing of new, advanced weapons systems in the areas east of Norway. Several of these will have nuclear propulsion systems,” he stressed.

Wether or not this summer’s Arctic voyage included work on the Poseidon drone or affiliated subsea installations is not known to the public. The Northern Fleet’s press service is not allowed to talk directly to foreign journalists.

The existence of a Russian programme to develop a nuclear-powered underwater drone was first mentioned by The Barents Observer in 2016, but was publicly announced by president Putin in his 2018 state-of-the-nation speech.

According to Putin, the Poseidon can cross entire oceans at depth down to 1,000 meters and is nearly impossible to intercept. It is powered by a small nuclear reactor and supposed to carry a several megaton nuclear payload. Russia can with such second strike weapon counter the U.S. anti-ballistic missile defense systems.

When ready, the Posideon is finally supposed to be carried by submarines, like the soon-to-sail “Belgorod” and the later-coming Khabarovsk submarines. Some reports also claim the Poseidon could have a seabed launch option, known as Skif.

“Akademik Aleksandrov” could also serve the creation of the new multi-sensor submarine detection network on the Arctic shelf, named Harmony.

Harmony will be powered by small nuclear reactors that will be placed on the seafloor by GUGI vessels, either submarines or surface ships, officially named “oceanographic research vessels”.

The subsea surveillance network is likely to start in Severomorsk and continue across the Barents Sea, Kara Sea, Laptev Sea and East Siberia Sea towards the domain of Russia’s Pacific Fleet.