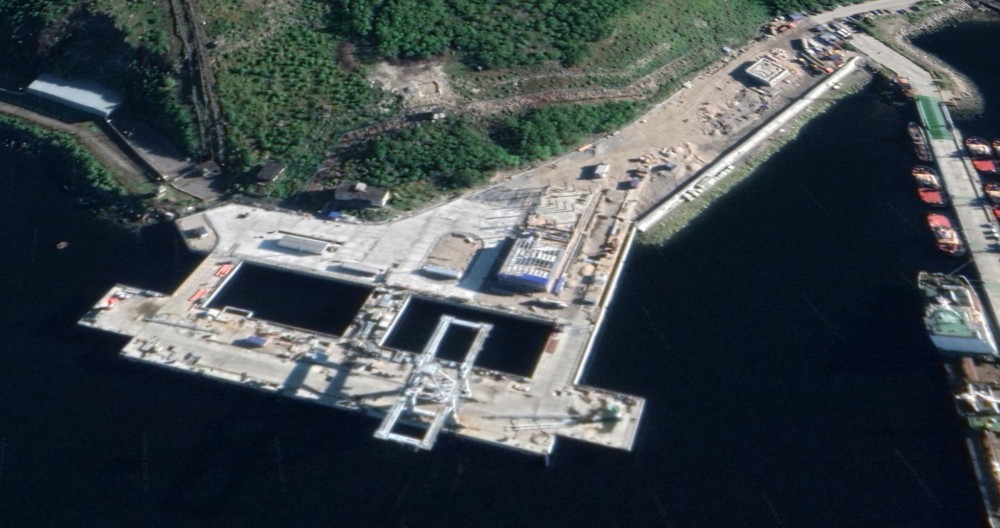 New quay with SLBM-crane and port infrastructure in Okolnaya Bay. One half-ready new huge warehouse and other workshops facilities under construction fit the descriptions of the storage and maintenance base for the nuclear-powered underwater drone, Putin's so-called "Doomsday weapon". The facilities and new areas are to the right in the image. The road from the left is from the SLBM storages. This satellite image by Google Earth is from the summer of 2020.

Vladimir Putin's Russia is indeed seriously going to deploy a new leg to its nuclear triad, the unmanned underwater nuclear-powered Poseidon. A multi-billion storage and maintenance facility at the Kola Peninsula will be up and running by June 2022, aimed at serving at least 30 such drones.
Read in Russian | Читать по-русски
By

Construction of the base to serve the most terrifying weapon mankind ever has seen is well underway.

The Barents Observer has over years studied satellite images of the Northern Fleet’s bases, and weapons storage facilities, along the coast of the Kola Peninsula. Latest updates of Google Earth images are from the summer of 2020. Here, a new huge 58 meters long and 16 meters wide multy-storey warehouse or workshop, along with other port-side facilities, are clearly visible in connection with the new quay for loading Bulava ballistic missiles at Okolnaya Bay.

Building of the quay itself, with the crane for Bulava-missiles to the Borei-class submarines, took place in the period from 2012-2018. The work on the new buildings, aimed for what could be the Poseidons, started in 2018 or 2019.

Okolnaya Bay is the Northern Fleet’s largest ammunition storage, a well-known location for naval cruise-missiles and ballistic missiles (SLBMs) for the growing fleet of modern surface warship and submarines. If this is the new Poseidon base, it clearly indicate the level of risk Russian military commanders are willing to take, as the distance across the waters to nearby Severomorsk with about 70,000 inhabitants is only 1,5 kilometers.

Unlike ballistic missiles with nuclear warheads, like the Bulava, the 24 meters long Poseidon drone needs a hole new level of maintenance and readiness preparations. It is powered by a small nuclear reactor, likely gas-cooled, to keep its noise to a minimum. The reactor powers a jet-pump, giving the drone stealth-like capability for travel across world oceans without having to worry too much about range-limitations.

Little is known about the inside technology, but a previously leaked video of the Poseidon indicates a diameter of nearly 2 meters, with the warhead inside being 1,5 diameter wide and 4 meters long cylinder.

That is room enough for a huge megatons weapon. If detonated outside the east coast of the United States, the following radioactive contaminated tsunami-wave will cause severe consequences.

Its travel time from launch, though, can be days, maybe a week. From the North Atlantic or Barents Sea, with a speed of about 100 knots, the drone will use more than 48 hours. If slowing to a quieter stealth mode to sail undetected, time from launch to target will be longer.

From a Russian military prospective, today’s deterrence may not appear sufficiently credible, said Katarzyna Zysk, professor and deputy director of the Norwegian Institute for Defence Studies.

Moscow has repeatedly criticized the establishing of a U.S. missile defence system in Europe, calling it a “direct threat”. Last spring, the U.S Sixth Fleet sailed into the Barents Sea with surface warships for the first time since the collapse of the Soviet Union. One of the vessels was the destroyer USS Donald Cook, a ship with capability to function as part of the Aegis Ballistic Missile Defence System.

With the Poseidon drones, Russia chooses to go deep with a new weapon system not possible to stop by any U.S. anti-ballistic missile systems. The arms race enters a new, more terrifying, stage.

Professor Zysk said the psychological effect of a nuclear-capable unmanned vehicle with such a high destructive power “can be significant.”

She added that such drone may convincingly demonstrate Russia’s bid to change the balance of power in a conflict with a superior, nuclear-armed adversary.

“Poseidon is also an example of Russia’s ability to take risks and experiment with new technologies, such as unmanned autonomous systems, artificial intelligence, directed energy weapons and others with the objective to incrementally amplify existing symmetric and asymmetric capabilities,” Zysk said adding that the overall aim is to provide Russia a critical advantage on the battlefield.

For people in Murmansk and Severomorsk, the hazardous work to take place as 30 small-sized reactors will be maintained at the new workshops in Okolnaya Bay is not up for public debate. The military’s use of nuclear power reactors us surrounded by secrecy.

In 2019, defence ministry officials denied any leakages of radioactive isotopes after a Burevestnik nuclear-powered cruise-missile exploded during a recovery operation from the seabed of the White Sea, off the coast of Nenoksa in Arkhangelsk region. The denials continued as officials in nearby Severovinsk measured increased radiation at several of the monitoring stations in town. Social media posts showed how the victims where transported in ambulances covered in plastic with drivers wearing protection suits.

The Nenoksa explosion came only weeks after Russia’s top-secret Losharik submarine caught fire while on mystic mission in the Motovksy bay not far from the maritime border with Norway, killing all 14 crew members. Immediately after the fire, Losharik’s mother ship, the Podmoskovye, sailed to Okolnaya Bay with the ill-fated mini-submarine beneath. A special structure that very well could have been a Harmony mini-reactor was covered on the deck of Podmoskovye and people in special suits could be seen walking on the pier.

The infrastructure now under construction near the new SLBM-pier in Okolnaya Bay could additional to serving the Poseidon drones also provide for other purposes related to military use of mini-reactors on the seabed of Russia’s Arctic waters.

Russia plans to complete a storage and maintenance base with warehouses and workshops where the Poseidon will assume combat duty and conduct launches by June 2022, Izvestia reported earlier in January.

The Barents Observer has previously reported about Poseidon being prepared for testing in Arctic waters. The first carrier of the drone will be the Belgorod (K-329), a rebuilt Oscar-II class submarine aimed to sail special-purpose missions for GUGI, the defence ministry’s Directorate for Deep Sea Research. Belgorod is expected to enter service later this year from the shipyard in Severodvinsk.

The second submarine to carry the Poseidon is the Khabarovsk a special prototype submarine, believed to be based on the hull of Russia’s 4th generation ballistic missile subs of the Borei-class.

After launch of Khabarovsk, a two-years testing period will follow. Two or three submarines similar to the Khabarovsk, dedicated to carry six of the Poseidon drones each, according to Covert Shores, a dedicated portal with quality insights to submarine warefare.