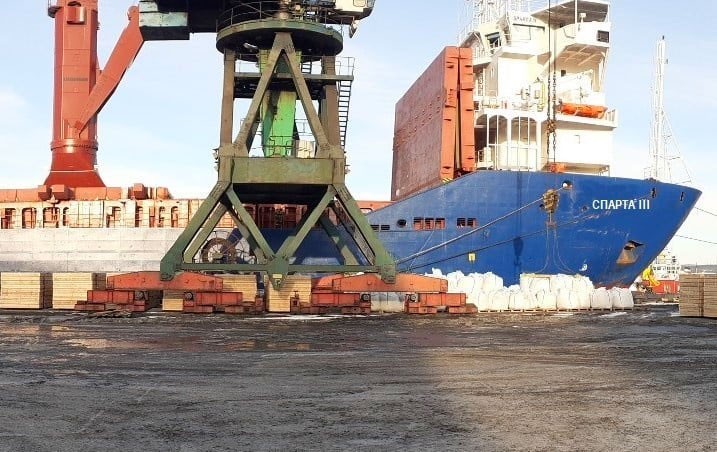 The Sparta III sails to the far northern Russian archipelago to deliver cargo to the Northern Fleet's Nagurskoye base.
Read in Russian | Читать по-русски
By

It has been a troublesome winter for the 9,490 ton deadweight ship and its owner Oboronlogistika. For weeks, the ship was trapped in thick sea-ice in the Yenisey Bay and it was unable to break free until a nuclear-powered icebreaker came to the rescue.

It soon turned out that the ship did not have the necessary permissions for sailing in the area.

This week, the Sparta III arrived in the far northern archipelago of Franz Josef Land. Accompanied by icebreaker Vladivostok, the cargo ship made its way through the sea-ice surrounding the Arctic islands.

The Arctic sea-ice has passed its seasonal peak and there is now a 10-30 cm thick layer along the archipelago’s northern and western coasts, ice maps from the Russian Arctic and Antarctic Research Institute show.

A thicker belt of sea-ice is still separating the southern parts of the archipelago with the rest of the Barents Sea.

VIDEO: icebreaker Vladivostok makes it through the ice to Aleksandra Land. Footage by Rosmorport

It is not known what kind of cargo that the Sparta III is carrying, but the ship has over the past years been extensively used for shipments of construction materials to remote northern military bases. She ship can also carry military hardware.

The Naguskoye base is located on the island of Alexandra Land and houses a new major military complex and upgraded airfield.

Shipowner of the Sparta III is Oboronlogistika, the company that is 100 percent owned by the Russian Ministry of Defense.

Following its exhausting ice-capture in the Yenisey Bay, the steering system of the vessel was destroyed, and it had to be towed all the way to Murmansk.

According to Oboronlogistika, it has now gotten an extraordinary certification for further operations in the north. The steering and propeller complex has been repaired and a modernized navigation system is installed.

The ship will now follow up military and commercial contract obligations and deliver goods to destinations located along the Northern Sea Route, the company informs.

The Sparta III has two cranes that each can lift up to 350 tons.

Big growth is followed by scandal for military Arctic shipper