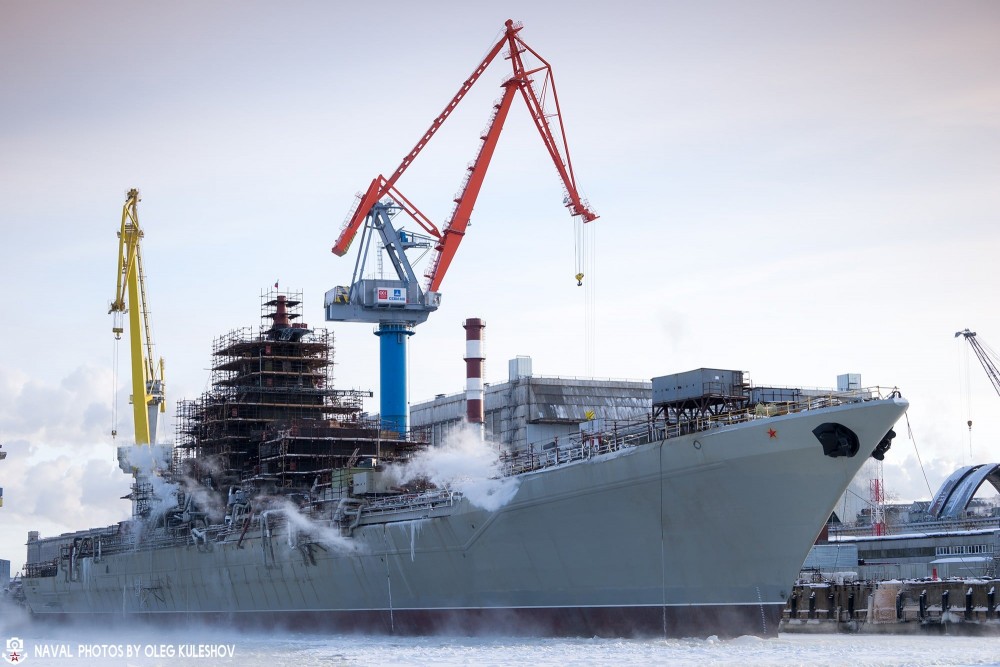 Originally commissioned into the Soviet Navy in 1988, but the nuclear battle cruiser "Admiral Nakhimov" was rarely deployed to sea. Since 1999, the warship has been docked at Sevmash in Severodvinsk, now undergoing repair and serious upgrades. Photo: Oleg Kuleshov

There are currently 13 nuclear-powered submarines under construction in Severodvinsk, plus the modernization of the large battle-cruiser Admiral Nakhimov.
Read in Russian | Читать по-русски
By

2021 became a record year for Russia’s only yard building nuclear-powered submarines. Three subs were handed over to the navy, two were put on water and two more were laid down.

Not since the late days of the Soviet Union have the workers at the two yards in Severodvinsk been busier than now. While the Sevmash is building new subs, the Zvezdochka repairs and upgrades older submarines.

Moscow’s modernization program for the navy over the last decade stands in sharp contrast to considerable neglect in the years after the disintegration of the Soviet Union.

2022 marks ten years anniversary since the Russian navy’s first 4th generation multi-purpose submarine, the Severodvinsk, successfully launched a Kalibr cruise missile from submerged position in the White Sea. While it took nearly 20 years to complete the construction of the Severodvinsk, the following vessels of Yasen-M class are built at a substantially faster speed.

Construction of the Novosibirsk, which was commissioned for the navy in late December 2021, took eight years.

Similar speed are also seen for the new ballistic missile submarines of the Borei-A class following the Yury Dolgorukiy that took 16 years from being laid down in 1996 to commissioning for the Northern Fleet in 2012. The Knyaz Oleg, handed over to the Pacific Fleet just before Christmas last year took seven years to build.

By January 1, 2022, the following 13 nuclear-powered submarines are at different stages of construction at the Sevmash yard and are all expected to be delivered to the navy before 2027.

While high-profile publicity is given to lay down ceremonies, launching and commissioning of the ballistic missile subs and multi-purpose subs, far less is known about special-purpose subs. The Barents Observer has on several occasions reported about the Belogord, the world’s longest submarine built on a modified Oscar-II class hull. The submarine will be carrier of the new Poseidon nuclear-powered, nuclear-armed, drones, and likely be based with the Pacific Fleet later this year.

Two other carriers of the Poseidon drone are currently under construction at the Sevmash yard, the Khabarovsk and Ulyanovsk. These two submarines are very rarely reported about in Russian media or other military sources in Russia.

A blog site monitoring new and existing Russian navy vessels, however, suggests that the Khabarovsk will be commissioned in 2024, and followed by Ulyanovsk in 2025. When Ulyanovsk was laid down in 2017, the Barents Observer reported the vessel to be of the Yasen-M class.

Other, non-confirmed submarines that might be in the pipe for construction in the years to come are two more Borei-A class vessels, two more Poseidon carriers and one or two special-purpose mini-submarine to sail for GUGI, the Defense Ministry’s Main Directorate for Deep Sea Research.

Design work for the 5th generation nuclear-powered submarines, referred to as the Husky class, is said to be underway, but so far no contracts are signed for building.

Additional to new submarines, the Sevmash yard is busy working on repair and modernization of the large nuclear-powered battle cruiser Admiral Nakhimov. Originally commissioned into the Soviet Navy in 1988, the warship was rarely deployed to sea and has been in Severodvinsk for the last 23 years. If no further delays are announced, the battlecruiser will be re-commissioned for the Northern Fleet in 2023.