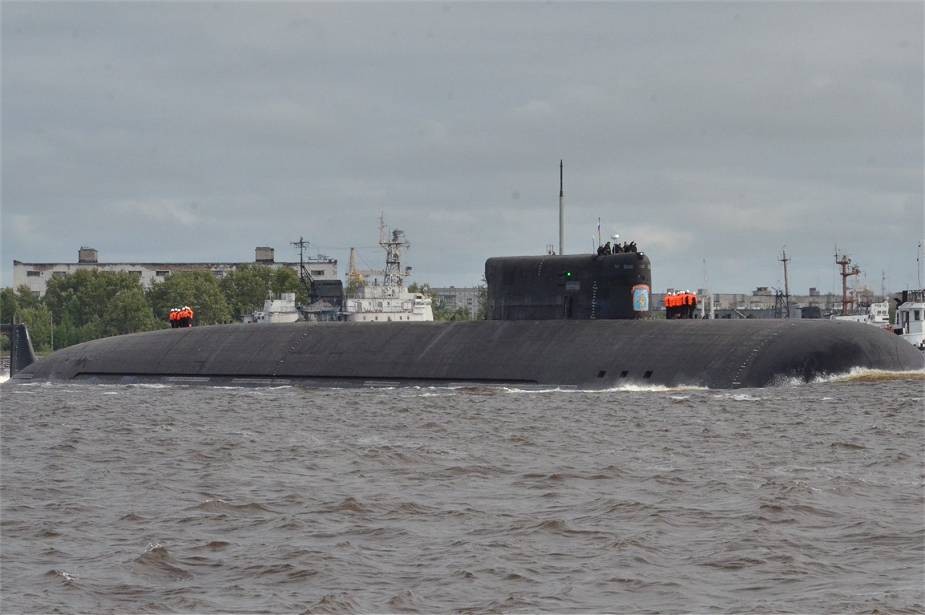 "Belgorod" sailing out from the Sevmash shipyard in Severodvinsk on June 25.

The nuclear-powered Belgorod (K-329) is the largest submarine built in the last 30 years.
Read in Russian | Читать по-русски
By

The submarine is built on the hull of an Oscar-II class, but its mission is very different. “Belgorod” will bring to sea a new leg to Russia’s nuclear deterrence: The Poseidon nuclear-powered, nuclear-armed, underwater drone. Also, the submarine is designed to carry smaller deep-diving special-purpose submarines, like the “Losharik”, as well as equipment for secretive military work on the seafloor.

With the deep-diving Poseidon drone, Russia aims to counter any U.S. missile defense systems and by that ensure deterrence, a second-strike capability. In size, the drone is about 20 times larger than normal torpedoes. Powered by its own small-size nuclear reactor, the Poseidon is aimed to go independently non-stop from anywhere in the Arctic to anywhere on the east coast of the United States.

Little is made public about the 178-meters long submarine, but state-affiliated news agency TASS this weekend confirmed that “Belgorod” sailed out to the White Sea on June 25 for the first sea trials.

Photos and videos of “Belgorod” sailing out from Sevmash soon after appeared on Russian social media.

As previously reported by the Barents Observer, Moscow’s plan is to deploy 16 Poseidon drones on combat duty with the Northern Fleet.

Two special-purpose submarines are to carry the weapons, the “Belgorod” and the “Khabarovsk”, both built at the Sevmash yard in Severodvinsk. At a later stage, two or three additional submarines of the same class as “Khabarovsk” are planned to be built for the same purpose.

The “Belgorod” was launched in April 2019 and will be handed over to GUGI, the Main Directorate of Deep-Sea Research, when sea trials are completed and readiness confirmed.

GUGI is an organizational structure within the Defense Ministry and is separate from the navy. It has its own base in Olenya Bay on the coast to the Barents Sea, where the 29th Special Submarine squadron operates mini-subs and mother ships like the “Podmoskovkye” (BS-64) and “Orenburg” (BS-136). That said, TASS reported that Belgorod will be transferred to the Pacific fleet. The news agency, however, is well-known for misleading statements on Russia’s military deployments.

The Barents Observer has previously reported about the built-up of new coastal infrastructure for nuclear weapons handling at Okolnaya Bay near Severomorsk. It is here GUGI subsea reactors are maintained and could as well be the future location for maintenance of the Poseidon drones to be deployed in the Barents Arctic region.

With a hull estimated to be 178 meters, longer than the Typhoon submarines of the Cold War, ”Belgorod” is the longest submarine ever built anywhere in the world, and the largest in tonnage built at the Sevmash yard since the last Typhoon submarine was commissioned in 1989.

“Belgorod” is believed to have four to six tubes aimed for the Poseidon drone, a weapon that came as a surprise when it first was confirmed in President Vladimir Putin’s annual State of the Federation speech in March 2018.