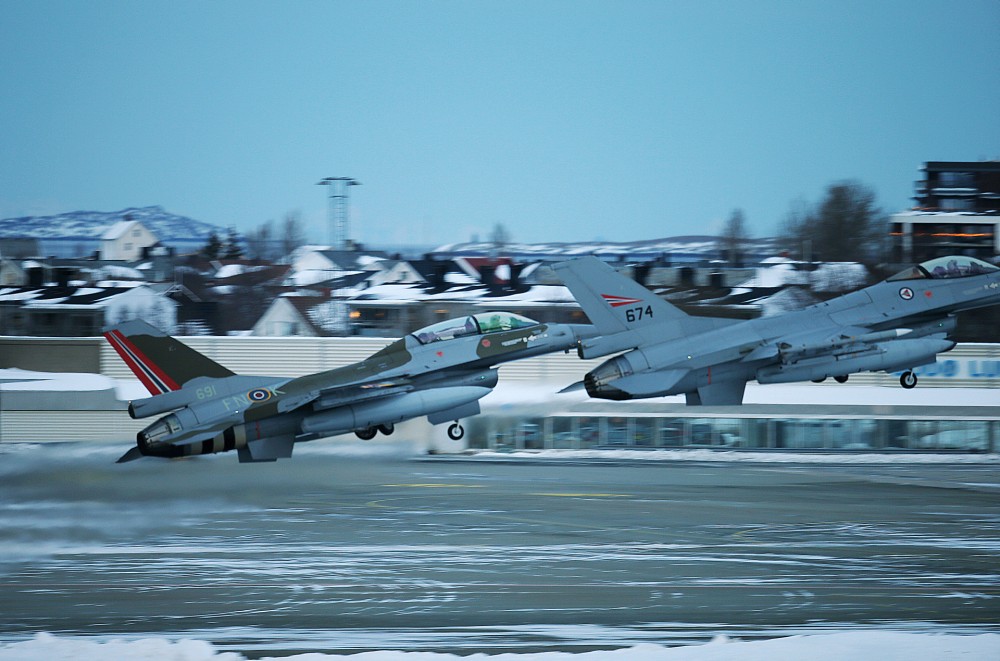 A historic chapter in NATO’s Quick Reaction Alert (QRA) comes to an end as the F-16 Fighting Falcon flies last mission on January 6 and Bodø Air Base shuts down.
Read in Russian | Читать по-русски
By

Fighter jets have been stationed at Bodø since 1955 and the air base was Norway’s most important throughout the Cold War and until today.

Located some 80 km inside the Arctic Circle, Bodø is strategically placed on the coast to the Norwegian Sea and in short flying distance to guard the northern air space against Russian military aviation flying out from the Kola Peninsula.

The closure of the air base also marks the end to 40 years of F-16 as the main fighter jet in the Norwegian Air Force.

The new fleet of F-35s is based at Ørland Air Base in southern Norway, but a few will also serve as NATO’s new QRA at Evenes Air Station near Harstad in the north. So far, 24 of 52 new F-35 have arrived in Norway. By 2025, all the new planes will be in service.

On January 6, the F-35 fighter jets will launch an active QRA for NATO from Evenes and the last two F-16 from Bodø will fly their last mission, marking the official end to Bodø Air Base as home to the fighter jets.

One of the two F-16 will return to Bodø and remain as a museum exhibit at the town’s Aviation Museum.

“Integrating the modern fifth-generation F-35 fighter aircraft into the 24/7 mission of safeguarding the skies at home and abroad is a quantum boost. When emergency preparedness and QRA are flown out of Evenes next year, the Royal Norwegian Air Force will provide more networked and capable fighter assets to the mission. The F-35 has an onboard information system from a completely different generation and a situational overview of the airspace that is significantly superior to that of the F-16. Norwegian F-35s have already flown missions - in Norway and in Iceland - in a NATO context. They have proven their compatibility and integration with NATO Air Command and Control,” said Lt. Colonel Tron Strand, Commander 132 Air Wing, in a statement posted on the alliance’s portal.

Joint mission with B-2

A few of the F-35s have already been on training missions with take off from Evenes, including in September last year when flying together with U.S. Air Force B-2 bombers over the Norwegian Sea.

In March and April, Norway will host its biggest military drill inside the Arctic Circle since the Cold War. About 40,000 soldiers will take part when exercise Cold Response 2022 kicks off in the Ofoten area in partnership with Norway’s NATO allies. During the exercise, Evenes Airport will play a key role.

In addition to NATO members, also Finland and Sweden are to take part in the exercise. Before Christmas, the Finnish Government announced its decision to buy 64 of the F-35 Joint Strike Fighter to replace the country’s current fleet of F/A-18 Hornets.

In a policy-brief for the Norwegian Institute of International Affairs, former Executive Officer and F-16 pilot at Bodø Air Base, Colonel Per Erik Solli (retired) highlights that Finland’s decision to buy the F-35 is a move towards greater interoperability across the Nordics.

“The decision paves the way for further regional cooperation on air power in the years ahead,” Per Erik Solli states.

“For more than a decade, the Nordic countries’ fighter forces have cooperated closely through the Cross Border Training regime as well as tactical and joint multinational exercises. This cooperation has become intertwined with broader regional security and defense integration since 2014,” Solli and co-author Øystein Solvang write.

Like Finland and Norway, also the Danish Air Force is buying F-35 and expects the first planes to arrive in 2023.

Meanwhile, the airport in Bodø will continue to serve civilian air traffic and still be home to 330 Squadron of SAR helicopters operating under the management of the Joint Rescue Coordination Centre of Northern Norway.