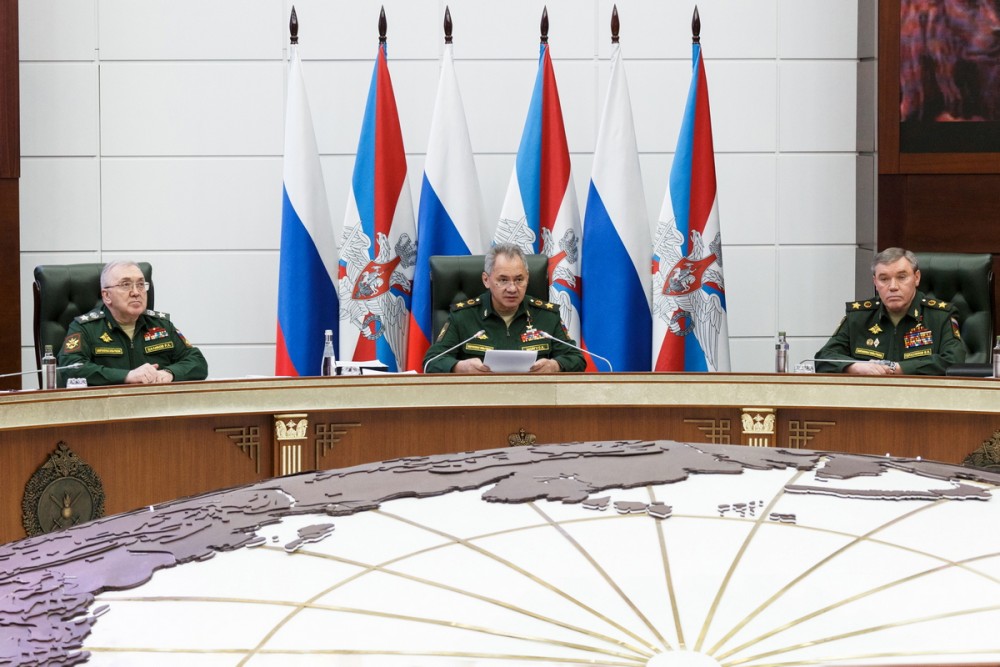 Sergei Shoigu says the Northern Fleet will get more than 500 new modern weapons in 2022. Valery Gerasimov, Chief of the General Staff of Russia's Armed Force sitting to the right. Photo: Russian Ministry of Defense

In the shadow of Russia’s bloody war on Ukraine will Arctic combat capabilities get an extra boost in 2022, the defense minister assures.
Read in Russian | Читать по-русски
By

Putin’s defense minister Sergey Shoigu was Tuesday back on stage after weeks of speculations over his whereabouts. In front of the collegium of military commanders, the minister outlined how things are going.

He explained the historical reasons for the ongoing “operations” in Ukraine.

“We are taking measures to restore peaceful life,” the minister cynically lied to the group of high-ranking officers encircling him, well aware that his troops were just about to launch another major military attack on civilian targets in eastern Ukraine.

In the televised speech, Shoigu said the events in recent months show how important it is for Russia to continue to improve its army.

He then listed some key areas of priority, among them the rearmament of the Kola Peninsula, a region in Russia’s northwestern corner bordering Norway and Finland. Here, north of Murmansk, the Northern Fleet has its fleet of ballistic nuclear missile submarines.

Last year, the Northern Fleet got status similar to a military district, with the responsibility for both Russia’s northwestern regions and the Arctic, including the archipelagoes where renewed airfields and air defense systems are deployed.

“In 2022, we continue to increase the combat capabilities of groupings of forces, we are actively building up combat potential and carrying our rearmament,” Shoigu said, and could tell that “more than 500 units of modern weapons will be delivered.”

The minister did not elaborate on which weapons systems were on the delivery list more than saying “radars field,” … and … “anti-aircraft missile systems.”

The Barents Observer has previously reported about satellite images showing several tens of new large bunkers for missiles storage being constructed in Okolnaya Bay across the waters from Severomorsk, the Headquarters of the Northern Fleet north of Murmansk.

Also, a brand new port facility for loading ballistic missiles and other weaponry onto submarines is built on the shores of the same bay.

Sergei Shoigu could inform his commanders that 117 buildings and structures were built as part of the modernization of military infrastructure in the Arctic regions. In 2022, work will be carried out on another 28 objects.

One of the objects, in the satellite image below, seems to become a reinforced giant bunker with four chambers. It is not known what kind of weapons will be stored and maintained in the new facility. However, as reported earlier, the Northern Fleet will be the first in Russia to get a storage and maintenance facility for the new hypersonic Tsirkon missiles.

The defense minister noted that the combat strength of the 14th Army Corps will gradually increase by 1,5 times compared with today.

This corps is a tactical formation consisting of two Arctic motorized rifle brigades in the Murmansk region, the 200th in Pechenga near the border to Norway and the 80th in Alakurtti near Russia’s border to Finland.

Troops from the 200th motorized rifle brigade have reportedly suffered big losses in the Ukraine war.

Earlier this week, Russia’s top-diplomat on Arctic affairs, Nikolai Korchunov, warned about unintended clashes with NATO in the Arctic as the alliance is increasing its activities in the north.

“The internationalization of the Alliance’s military activities in high latitudes, which involves non-Arctic NATO states, cannot but cause concern. In this regard, there are risks of unintentional incidents that, in addition to security risks, can also cause serious damage to the fragile Arctic ecosystem,” the diplomat told to state-controlled TASS news agency.

Meanwhile, as a consequence of the dramatical changes in Europe’s security landscape following Russia’s war on Ukraine, the two Nordic nations Finland and Sweden are now on the doorstep to join NATO.