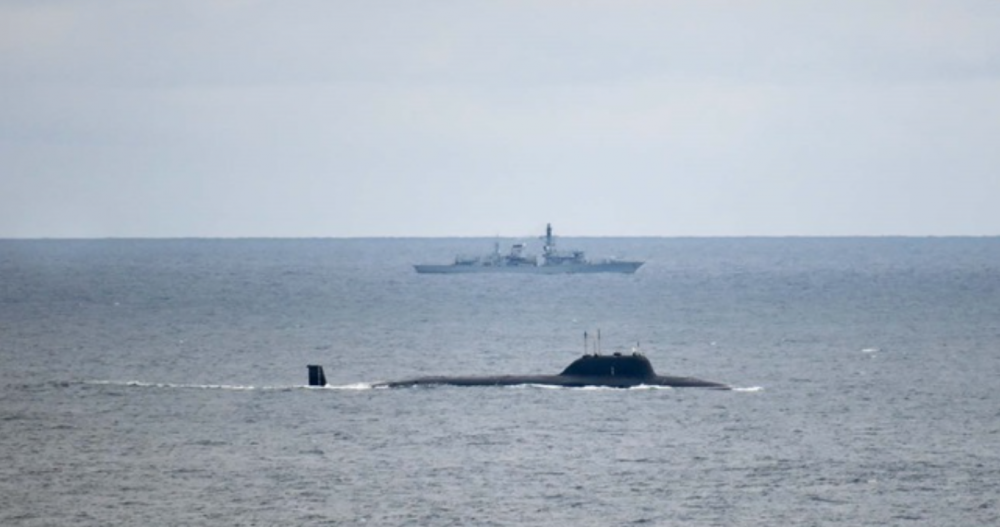 The "Severodvinsk" was first of the two Northern Fleet subs to surface northwest of Bergen. Photo: Royal Navy

While Norwegian officials are reluctant to give details, the British Royal Navy now tells how they shadowed the two Russian Northern Fleet submarines "Vepr" and "Severodvinsk" as they made their underwater journey south along the coast of Norway from the Arctic.
Read in Russian | Читать по-русски
By

“… the submarines surfaced separately in the North Sea, northwest of Bergen, Norway, on July 16 and 19,” the Royal Navy says.

Bergen is home to Norway’s main naval base, the Haakonsvern.

Both “Severodvinsk” (Yasen class) and “Vepr” (Akula class) are armed with torpedoes and cruise missiles. The subs are en route from their home bases on the Kola Peninsula to St. Petersburg where they together with the Northern Fleet warship “Severomorsk” will take part in the Navy Day Parade on July 31.

Asked by the Barents Observer if the “Severodvinsk“ sailed in surface position along the coast of Norway, spokesperson Major Elisabeth Eikeland would not detail, pointing to “operational reasons.”

In previous years, nuclear-powered submarines sailing inter-fleet transfer en route from the Northern Fleet to the Naval Parade in St. Petersburg have sailed surfaced all along the coast of Norway, likely because the vessels have not been prepared for combat readiness.

Now confirmed by the Royal Navy to have sailed submerged all south to the North Sea before surfacing indicates that both subs are combat ready.

It was the frigate “HMS Portland” - in close cooperation with a British Poseidon P8 maritime patrol aircraft, that tracked the Russian nuclear submarines.

HMS Portland’s Commanding Officer, Commander Tim Leeder, said: “Our success on operations marks the culmination of many months of specialist training and exercises. Critically, the cohesiveness of Royal Navy, RAF and our allies capabilities ensures that we are capable of conducting and sustaining these types of anti-submarine operations in the North Atlantic.”

As previously reported by the Barents Observer, the Yasen class “Severodvinsk” (K-560) sailed through Danish waters into the Baltic Sea on July 19. The “Vepr” (K-157), together with the warship “Severomorsk”, sailed under the Great Belt Bridge Friday morning, July 22.

In previous years, Northern Fleet submarines and surface vessels participating in the main Navy Day Parade in St. Petersburg have conducted exercises on their way home, normally in August.

In 2019, the pre-announced Russian naval exercise Ocean Shield in the Baltic Sea made a surprise move and expanded into Skagerak and the North Sea and included warships from several of Russia’s fleets, including the Northern Fleet.

Last year, the Northern Fleet said they would conduct “tactical exercises” while sailing around Scandinavia. Little, however, happened as the submarines, including the Oscar-II class “Orel” sailed north towards the Kola Peninsula.