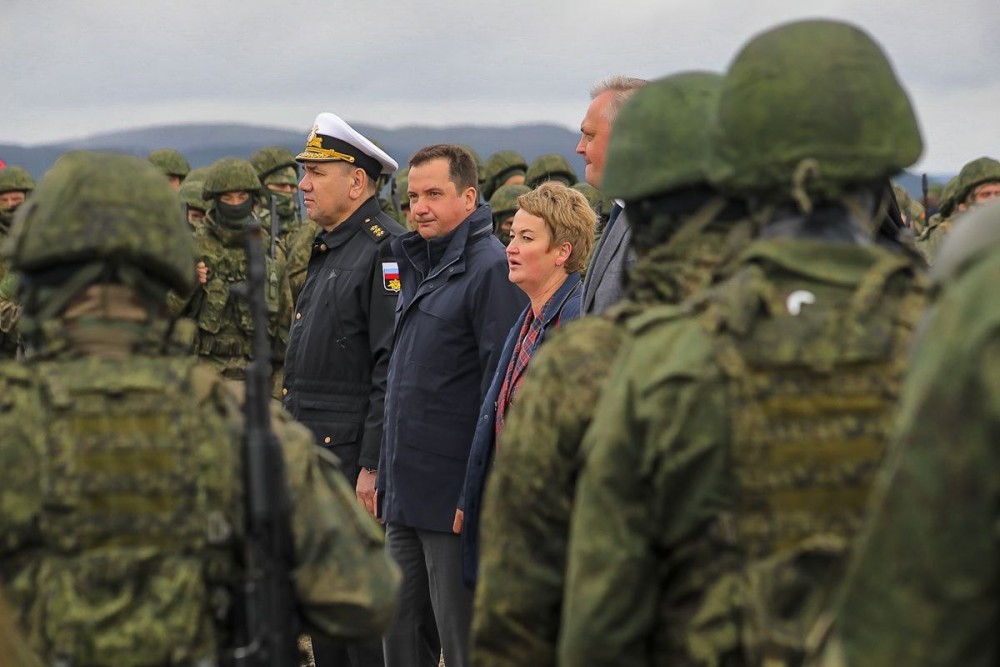 Governor Aleksandr Tsybulsky greets warriors of the newly established Arkhangelsk Battalion ahead of departure to occupied lands in Ukraine. Photo: Tsybulsky at Telegram

An angel will watch over you, Governor of the Arkhangelsk region assures local soldiers ahead of their departure to the battlefields in Ukraine.
Read in Russian | Читать по-русски
By

A brigade with soldiers recruited from northern Russia was this week greeted by government officials and blessed by church clerics.

The unit is named the Arkhangelsk Battalion, and reportedly includes primarily contract warriors from the north Russian region with the same name.

The soldiers will now depart to occupied Ukrainian territories, where they, according to governor Aleksandr Tsybulsky, are to “replace troops that serve Russia in the zone of the special operation.”

It is a kind of holy mission, the governor explains.

“The Arkhangelsk Battalion - this is not only a geographical reference, it means that you will be under the protection and patronage of Archangel Mikhail,” Tsybulsky said in a ceremony.

According to the regional leader, Archangel Mikhail has always been seen as “the patron of warriors fighting for a just cause, for people that protect their land, their homes, their relatives.” The speech of the governor is referred to by the Diocese of Arkhangelsk.

Governor Tsybulsky is himself a military man and served for about ten years in the Russian Armed Forces. And he is not shy to tell about his own fighting spirit.

“I have never let down my faithfulness to the Motherland and readiness to enter into battle for its freedom and independence, [and] support brotherly peoples,” he underlined.

But unlike the soldiers that this week stood lined up in front of him in a carefully staged show, Tsybulsky will himself be nowhere close the bloody battles in Ukraine.

The men of the Arkhangelsk Battalion risk never returning home. Many of them are likely to lose their lives in battle, like hundreds of men from the Northern Fleet before them.

As losses have mounted, Russian efforts to recruit new men to military service have intensified, and a number so-called volunteer units have been sent to Ukraine.

Lately, regional governments have engaged in the efforts, and forces similar to the Arkhangelsk Battalion have been established across the country. They are supported by regional budgets and manned primarily by soldiers from the respective region. Many of the battalions are likely to be based on existing units, only with a new name.

The members of the Arkhangelsk Battalion have undergone training in the Northern Fleet’s premises in Pechenga, an area located only few kilometres from NATO country Norway. This week’s ceremony took place on a training range near the Russian border town of Zapolyarny.

According to Governor Chibis, soldiers from Murmansk are showing “miracles of bravery and endurance on the front lines.”

Locals are eager to take part in the war, he argues.

“More and more people wish to enrol in the Russian Armed Forces to fight Neo-Nazism,” he underlines in a comment on Telegram.

Chibis has been one of the most outspoken pro-war Russian governors and regularly appears in public with clothes marked with a large ‘Z,’ the symbol of Russia’s war against Ukraine.

His attendance at the ceremony in Zapolyarny came only few days after his visit to occupied areas in Ukraine.