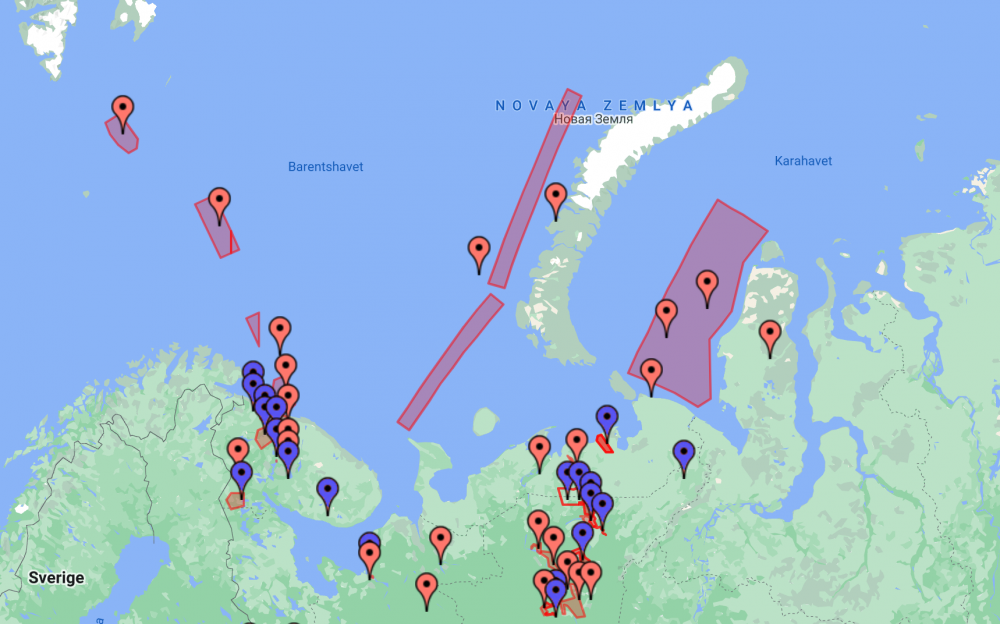 There are currently seven or eight Russian “Notice to Aviation” (NOTAM) areas in and over the Barents and Kara Seas, which is more than usual for this time of year. Illustration: NotamMap / Barents Observer

The week ahead will not be an easy sleep for security observers. Numerous military watchouts in Russia's northwestern regions.
Read in Russian | Читать по-русски
By

“Judging by the contents of the NOTAM messages and the corresponding PRIPs (Russian navigational warnings), at least some of the temporarily restricted areas are related to planned or ongoing weapon testing or live-fire training events,” said Kristian Åtland, Senior Research Fellow at the Norwegian Defence Research Establishment (FFI).

He noted that there are more warning areas up north than usual for this time of the year.

Several of the warning areas are in the waters between Norway’s Finnmark region and the Svalbard archipelago. Others are in the eastern Barents Sea and in the southeast Kara Sea.

The impact area for Russian rocket northeast of Bear Island could very well be fragments from the Angara rocket launched from Plesetsk cosmodrome on Saturday, October 14. The Defense Ministry in Moscow said the rocket brought the military spacecraft Kosmos-2560 into orbit.

There are also several NOTAM warnings onshore on the Kola Peninsula used for artillery training and cruise missile impact areas in the Komi Republic.

NATO will on Monday, October 17, kick-off its nuclear deterrence exercise “Steadfast Noon”. Main area for the drill will be over northwestern Europe and will involve over 60 aircraft, including the long-range B-52 strategic bombers.

“This is routine training, which happens every year,” Secretary General Jens Stoltenberg said at a press briefing ahead of next week’s NATO defense ministers meeting.

“We are closely monitoring Russia’s nuclear forces,” Stoltenberg continued and underlined: “We have not seen any changes in Russia’s posture.”

“President Putin’s veiled nuclear threats are dangerous and irresponsible. Russia knows that a nuclear war cannot be won and must never be fought,” Jens Stoltenberg said.

The NATO exercise hosted by Belgium will not carry live munition and will partly take place over the North Sea between Norway, Denmark and United Kingdom.

The Kremlin has not pre-announced any upcoming nuclear exercise. However, a White House spokesperson said it could come this month.

“We expect Russia to conduct its annual strategic nuclear exercise, they call it GROM, as early as this month,” National Security Council coordinator Johan Kirby told reporters on Thursday.

If so, that would be the second GROM [Thunder] nuclear strategic exercise this year.

The first took place in February, only days before Russia’s massive onslaught on Ukraine, and included all three legs of the nuclear triad, plus navy-launched cruise missiles. As previously reported by the Barents Observer, the Northern Fleet frigate “Admiral Gorshkov” during the exercise fired a Tsirkon hypersonic cruise missile from the Norwegian sector of the Barents Sea.

In August and September, Russia’s strategic forces moved several of its long-ranged Tu-95 and Tu-160 bombers north to the air base Olenegorsk-2 on the Kola Peninsula.

Katarzyna Zysk, a professor of international relations at the Norwegian Institute for Defence Studies, told the Barents Observer that sending such heavy bombers north “is certainly signaling.”

It is “not necessarily connected to the war in Ukraine,” she added, underlining the important role of the Arctic in Russia’s nuclear deterrence.

Nuclear weapons expert Hans M. Kristensen with the Federation of American Scientists recently warned that coinciding nuclear exercises in the middle of a large-scale war like the one in Ukraine are inherently dangerous because they can fuel further escalations.

“It’s a textbook example of what happens in a tense crisis where both sides escalate to demonstrate that they are serious about deterring each other, but therefore can’t de-escalate because it would make them look weak,” Kristensen wrote in a blog post on U.S. - Russian relationship.