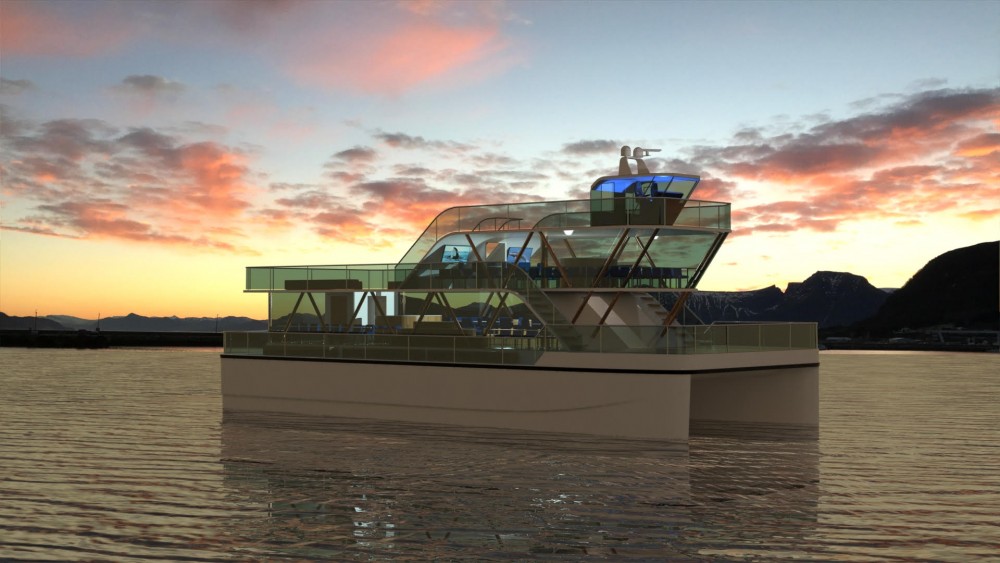 "Brim Explorer" will be the first hybrid-electric passenger boat to sail north of the Arctic Circle. Illustration: Green Wave Holding AS

“Brim Explorer” will sail the Lofoten archipelago during summer and whale watching from Tromsø during winter.
Read in Russian | Читать по-русски
By

“A green footprint is an inevitable part of future tourism in the Arctic,” says Agnes Árnadóttir, co-founder of Green Wave Holding, the company to launch the very first non-pollution cruise boat for Arctic waters.

The catamaran will have her maiden voyage with passengers embarking at the port of Svolvær, Lofoten in August 2019.

“Arctic is the place on earth where the effects of climate change are most rapid,” she says to the Barents Observer and explains the importance of not adding any extra pressure on northern communities. “There is already high pressure on animals and local communities, and the only way to operate tourism without increasing that pressure, is to operate in smaller scale and with a green profile.”

With a capacity of 140 passengers, “Brim Explorer” can sail on batteries for 10 hours with a cruising speed of 10 knots. The batteries can be charged over night at almost any shore power found in ports. If in need to sail longer distances at higher speed, the catamaran has a diesel engine running on non-polluting bio-fuel.

The vessel will be built with large windows, taking the passengers closer to nature and wild life for the entire voyage in all kinds of weather the coast of Northern Norway can offer. When lucky, that includes Midnight Sun in summer and Northern Lights in winter.

Agnes Árnadóttir says pollution-free is not the only argument making battery-power more favourable. “Another advantage is the increased comfort and enhanced experience of the passengers and crew as they are able to enjoy the nature in silence.”

On whale watching safaris, the ship can get much closer to the animals without disturbing them.

“Noise pollution is a serious problem for both large and small habitants of the ocean,” she says.

“Brim Explorer” is now under construction at a yard in Ålesund, Norway.

“There are few things more mind-blowing than standing outside in the dark Arctic night and hear the sound of the whales while smelling their herring-breath” Árnadóttir says with enthusiasm.

“Another aspect that will distinguish us from current operators is that we will apply the use of hydrophones and underwater drones on our tours. We want to give our guests a deeper insight into the ocean by offering an experience that plays on different senses.”

Winter tourism is growing fast in the fjords of Northern Norway, not least thanks to spectacular photos of humpback whales and killer whales in the waters just outside Tromsø.

The whales are following the food, and in recent years the stock of herring in the fjords in Troms provide for the best lunch a whale can get.

Agnes Árnadóttir says reactions in the market are positive. “We notice that both individual tourists and sales-agents applaud having a sustainable alternative.”

“For us, Brim is the first ship of many. We are already planning a second ship with improved system design and an interior and exterior design that is fit for longer expeditions.”

The company hopes to get a fleet of both day-tour vessels to destinations along the coast, but also to operate small expedition vessels that can take guests to vulnerable destinations in the Arctic with the use of battery-powered engines.

“That track will be driven by the tourists themselves and their preferences for a green alternative, but also the politicians who need to make a strategy for how we can combine tourism and protection of our vulnerable Arctic areas in a good manner,” Agnes Árnadóttir argues.

The Barents Observer has previously reported about the first prototype electric snowmobiles under testing for tourist purposes in Finnish Lapland. Also, a network of chargers for electric cars is coming on the Kirkenes-Murmansk highway, as well as along other cross-border roads from Northern Norway. Norwegian aviation authorities says it is only a time-question before the first electric passenger planes will come for commercial flights to the smaller airports in Northern Norway. In Sweden, the mining industry is now introducing huge electric mining trucks and a fleet of battery-powered busses is already serving the city of Umeå. Even the military find advantage of battery-power, as Norway’s guards on the border to Russia are currently test-riding all terrain electric bikes.

For expedition cruises to ice-covered waters like Svalbard, Hurtigruten is expanding its fleet with two new hybrid-battery ships. Also, Hurtigruten shift from diesel engines to gas-powered engines supported by batteries in a hybrid combination for at least six of the vessels today sailing the Bergen-Kirkenes voyages.

In times of dramatic climate changes, it is fear to say the Arctic leads the way towards an electric non-pollution transportation future.