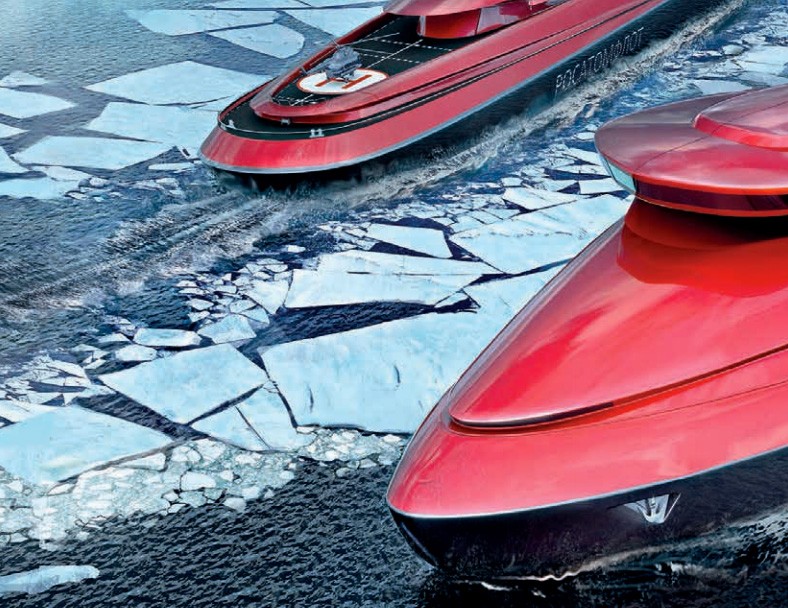 Russia prepares for year-round Arctic shipping with vessels more powerful than ever seen in northern waters.
By

Ministry of Transport announces competition for technical design of what will be the world’s most powerful icebreaker-class. The tender is within the framework on development of shipbuilding science.

The new icebreaker-class, project 10510, will be twice as powerful as the current nuclear powered icebreaker-class under construction at the Baltic Shipyard in St. Petersburg. 120 MWh power provided by nuclear reactors to four turbines will run the propellers. With such enormous power, the icebreakers will be able to crush up to 4,3 metre thick ice.

The icebreakers should sail year-round along the Northern Sea Route assisting convoys of vessels with deadweight over 100,000 tons, including large LNG-tankers believed to provide the markets in Asia with natural gas from the Yamal Peninsula.

“Launching the new icebreakers will enhance the efficiency of Russia’s oil and gas companies implementing projects on the shelf,” the announcement reads.

By announcing the design tender now, Russia’s Ministry of Transport hopes for the first icebreakers of the class to be put into operation by 2024.

It is the state corporation Rosatomflot that operates the fleet of nuclear powered icebreakers, all with homeport in Murmansk.

Competion on the Northern Sea Route

Arild Moe with the Fridtjof Nansen Institute is an expert on Russia’s development of the Northern Sea Route (NSR). In a newly published Geographical Review article, Arild Moe writes together with Lawson Brigham that it is still unclear how the ice-breaker fleet will be used to enhance the effectiveness of Northern Sea Route operations.

The two authors especially ask questions about how competition will be in the future between state owned Rosatomflot, conventional icebreakers and other commercial companies operating ice-classed vessels en route along the north coast of Siberia.

It is, however, certain that the nuclear icebreakers will play a key role also in the future.

«Atomflot is the dominant NSR organization providing icebreaker escort and ice pilots. With its extensive operational experience and presence in the Arctic, combined with active external information, it undoubtedly plays a key role in shaping policy for the NSR,” Moe and Brigham argue.

Today, there are five civilian nuclear powered vessels in operation. The two icebreakers “Vaigash” and “Taimyr” are sailing shallow waters and the rivers of Ob and Yenisei. Two Arktika-class icebreakers sails the Northern Sea Route, “Yamal” and “50 Let Pobedy”. The “Sevmorput” is a lighter-carrier vessel with icebreaking capabilities.

Three new nuclear powered icebreakers of the Project 22220, often refered to as the LK-60 class, are under construction. They are named “Arktika”, “Sibir» and “Ural” and are planned for commissioning from 2018 to 2020.

The older “Sovyetsky Soyuz”, “Arktika”, “Sibir”, “Rossiya” and “Lenin” are no longer in operation. “Lenin” serves as a museum in Murmansk, while the three others are waiting decommissioning.