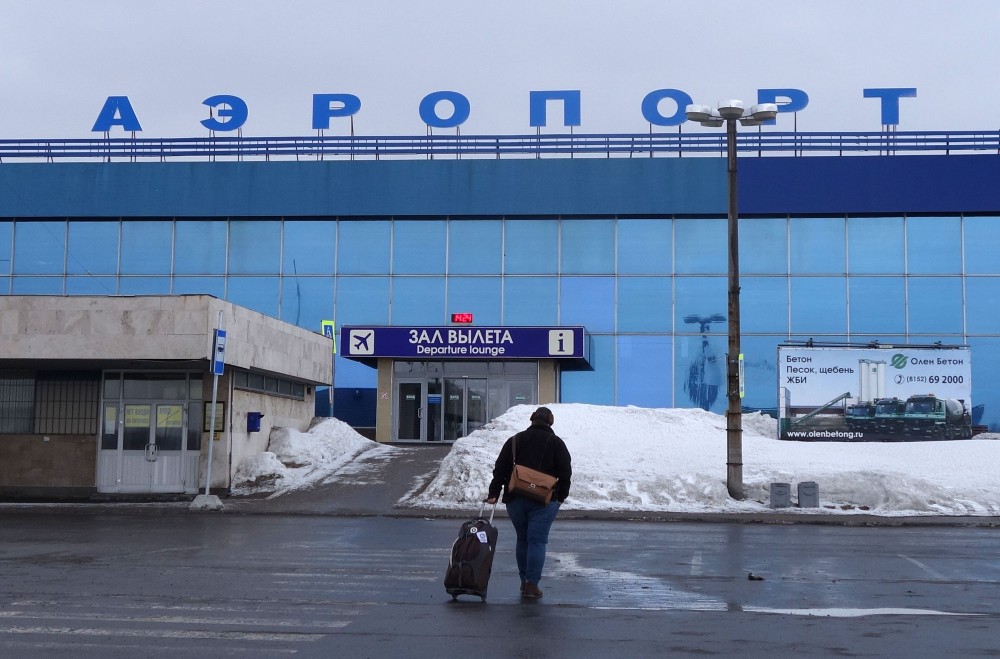 Residents of Murmansk are divided into two hostile camps because someone decided to rename the local airport Nikolai II.

These days, the main topic of discussion for Murmansk journalists and public figures has to do with an example of improper voting, ballot stuffing, vote swapping and political pressure. But this story is not about pension reform, an increase in prices or reports of corruption in the regional leadership, all topics which would normally provoke such agitation. No, the scandal that has shaken people and split them into two camps is as exotic as it is ridiculous: People are torn because someone has decided to rename the Murmansk airport for Czar Nikolai II.

Disgruntled townspeople are saying that whoever came up with this idea was obviously angry about something because of how surreal the decision. So now the main focus of Murmansk has become the result of the vote over the name of the airport.

So, three names had been suggested as possibilities. The hero, pilot Boris Safonov, who flew 234 combat missions and recorded 20 kills before being shot down and lost at sea, the Arctic explorer, Ivan Papanin, who was the first to establish the transport connection between Murmansk and Vladivostok and - unexpectedly – The Czar, Nikolai II. The last idea had been submitted by the newly converted polar Cossacks who, people say, enjoy playing mind games instead of sowing rye and wheat like they are supposed to. Their reasoning was that history books tell us that Murmansk was the last city founded under the Romanovs and moreover, that Nicholas II himself had personally given his permission. This fact has over time become extremely controversial though and the truth seems to be that Nikolai II had been skeptical about the high-budget idea of ​​creating a city on the edge of the world and in fact on October 4, 1916, the official birthday of the city, only the village of Murmansk was founded and its status as a «city» was not changed until after the revolution. And the czar never even came to Murmansk.

At first, it simply did not seem logical that when choosing the name of the city airport, so many of the voters would actually vote for the emperor. But then two things happened. First, Igor Safonov, the son of the heroic pilot, protested against his father’s name, as a nine-time recipient of the Ordin of Lenin, saying that even being used alongside the czar was an obscene joke. Specifically, his protest had to do with the organizers failing to even ask Safonov’s family for permission, this possibly a compensatory issue as well. And then deputy prosecutor, Natalia Poklonskaya did some homework. Her first step was to call the Crimeans for help and despite the geographical distance between polar Murmansk and the peninsula of discord, Poklonskaya discovered that Papanin had served in the Crimean Cheka death squads and participated in «red terror» massacres there. This discovery of course made candidate Papanin kind of a killer and a villain and with Safonov’s family playing obstinate, Nikolai II found himself raised to front runner status.

On the eve of the announcement of the voting results, a regional public chamber, who had not previously been noticed before in any civil wars connected to the case, appealed to the Federal Public Chamber with a demand to remove Murmansk from the list of cities participating in the project. The reason for this action was that apparently, the process of naming the airport was causing confusion and vacillation instead of unity as their patriotic impulse.

And then came some investigative journalism where Murmansk reporters found that the elections were fake because you could vote several times at different places, both virtually and/or offline. And then Telegram-conspiracy theorists said that naming the airport for the Czar-Martyr is a result of local vice-governor for ideology Anatoly Vekshin lobbying the authorities to make his stepfather happy. His stepfather is none other than the famous adventurist, sailor, 2 time climber of Everest, global traveler and priest, Fyodor Konyukhov.

Meanwhile, the votes were counted and Nikolai II won. And amidst the reaction, Natalya Poklonskaya managed to point out that in terms of budgetary policy, once the airport was named after the king, the long-awaited airport reconstruction money might be given a little faster.

Finally, the Communists rose from the darkness of the polar night, rallied their battered ranks and announced a protest rally. The czar’s victory in the elections was for some reason a betrayal of the memory of the Great Patriotic Warriors.

Meanwhile at the Murmansk city  airport  no special changes are noticeable. On the eve of the announcement of the voting results, an arriving flight from Moscow found that half of the baggage had been lost and a trench digging crew had managed to block the entrance to the private parking area.

And next to the air terminal, some clever social satirist had left a sad graffiti: “If you are the last one to fly away from Murmansk, please, turn off the light in the airport when you leave”.

This story is originally posted by the Novaya Gazeta and translated and re-published as part of Eyes on Barents, a collaborative partnership between media organizations and bloggers in the Barents region