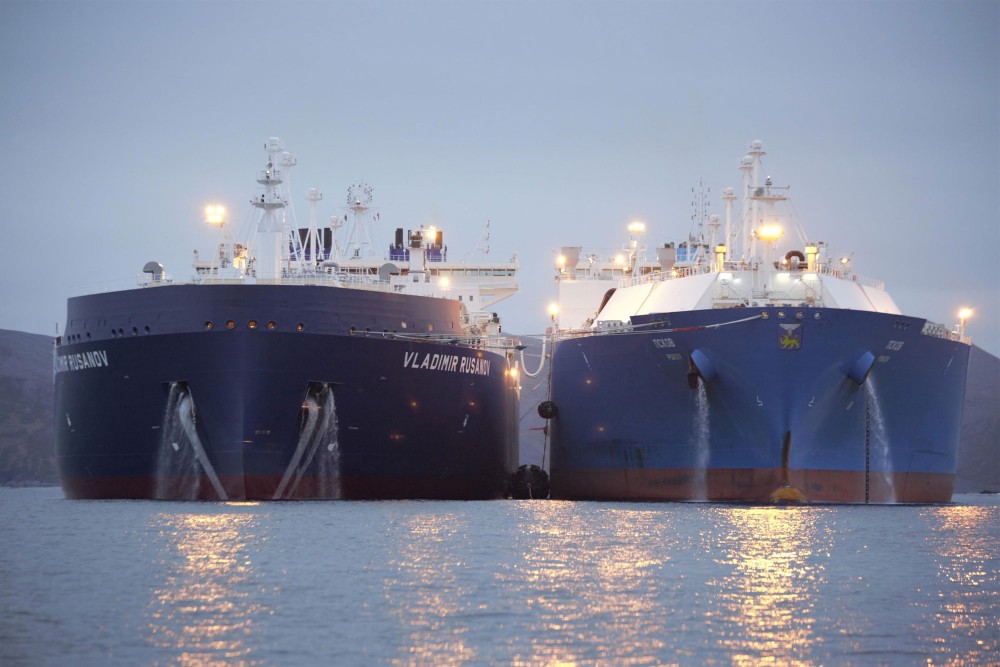 Almost half of the icebreaking carriers serving the Yamal LNG this week traverse the most difficult part of Russia’s Northern Sea.
By

At least six top ice class Arc7 tankers were the last days of September and early October sailing on the eastern part of the Northern Sea Route.

It is the most complicated part of the Arctic shipping route. Normally, ice lies thick in the area until late July and the waters again start to freeze in early October.

Judging from information from the Northern Sea Route Administration, the «Vladimir Vize» and «Georgy Ushakov» were on their way to or from ports in Korea, while the «Nikolay Urvantsev», «Fedor Litke», «Vladimir Rusanov» and «Vladimir Voronin» had course to and from China.

That constitutes almost half of the current fleet of icebreaking tankers serving the Yamal LNG project. A total of 13 carriers have been built for the project and the remaining two will start shuttling to the remote Russian Arctic coast in the course of the year.

The carriers are built for the Yamal LNG, the project operated by Russian natural gas company Novatek, and all shuttle to the terminal of Sabetta.  Never before have so many of them been in the eastern part of the Northern Sea Route.

The shipments are part of a growing Russian export of LNG to the Asian-Pacific region.

According to Novatek, about 25 percent of all its Yamal LNG was in the 3rd quarter of the year exported to Asian buyers. And a total of 15 shiploads were in the same period sent eastwards to the region via the Northern Sea Route.

The Asian-Pacific region is a strategic priority, says Lev Feodosev, Deputy Chairman of Novatek’s Management Board. A projected reloading terminal in Kamchatka will ultimately have capacity to handle up to 20 million tons of LNG per year.

«Developing further the navigational efficiency via the NSR combined with the construction of LNG transshipment complexes in Kamchatka and Murmansk will optimize the company’s logistics chain,» Feodosov underlines.

Ice maps show that the Northern Sea Route in the first days of October were completely ice-free and that the ice rim has retreated to north of the 80th parallel across practically the whole Russian Arctic.

However, shipping is still not all easy.

Drifting ice floes and icebergs in the area complicate navigation. The researchers on board the vessel «Professor Multanovsky» in late September experienced major ice troubles in the Laptev Sea and were ultimately forced to sail way further south than originally planned.

The research ship was at times fully surrounded by ice and unable to circumvent the ice floes, the Russian Meteorological Institute informs.

The voyage is part of the major Transarktika research expedition managed by Russian Arctic and Antarctic Research Institute.

Not only LNG carriers were early October sailing on the Northern Sea Route.

Shipping company Sovcomflot’s new LNG-fueled oil tanker «Korolev Prospect» is on its way from China to Murmansk, while the company’s sister ships, the «Lomonosov Prospect» recently set out from the Baltic port of Primorsk with course for China.

Just few days earlier, did the «Gebe Oldendorff» cross the Arctic route on its way from Canadian Milne Inlet to Qingdao, China. The ship is likely to carry iron ore from the Baffinland mine.

Neither the mining company, nor ship owner Oldenfdorff, have responded to an email from the Barents Observer.

COSCO in the lead

Chinese shipping company COSCO has for several years been the most active stakeholder in the transit shipments on the Russian Arctic route. General cargo Ship «Da Tai» was on October 2nd sailing through the East Siberian Sea, while the «Tian En» at the same time was about to complete its voyage from Finland to Tomakomai, Japan. Also the «Tian Qi» and «Tian Xi» have recently completed transit voyages  on the route.

COSCO sent its first two shipments on the NSR in 2013 and in 2018 a total of eight voyages were made.

In the course of the five year period, a total of 22 trans-Arctic shipments were conducted by the company.

Despite rapid ice melting along the Russian Arctic coast, the transit shipments across the route remain sparse. In 2018, a total of 491,000 tons of cargo was shipped transit on the route, most of it by COSCO’s eight Chinese ships.