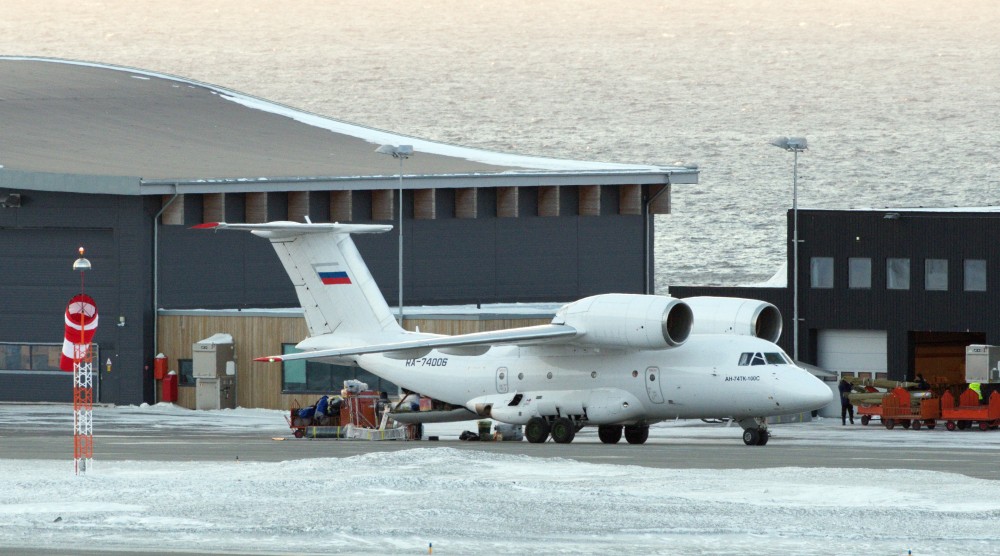 This Antonov-74 on Monday left Longyearbyen and landed in Barneo. Photo: Bjørn Frantzen

The first two aircrafts on Monday landed in Barneo, the Russian Arctic ice camp.
Read in Russian | Читать по-русски
By

The two Antonov-74s successfully landed in the airfield, which have been hectically under development over the last days.

«It is officially confirmed that the ice runway meets all the standards and Barneo starts the 2017 season!», the managers of the camp say on their Facebook page.

The full team of camp developers is now assembled on site. A third flight is expected this evening.

«Hurrah! The Barneo is starting its 2017 season», chief operations officer Irina Orlova says in a comment.

The camp is located at 89º24’N 135ºW, on a spot by the explorers named Zhalyuzi-2. It is built on a carefully selected ice floe and will over the next month serve researchers, explorers and tourists.

It was two helicopters and crews from the Aerogeo company which on 24th March identified the ice floe and subsequently brought the first manpower and equipment to the site. The helicopters had made their way from the Siberian city of Krasnoyarsk. The last part of the journey included stops in Khatanga and the Sredny Island on the Severnaya Zemlya.

Meanwhile, from now on it is Longyearbyen, the administrative center in Norwegian archipelago Svalbard, which will serve as logistical base for the Barneo.

An agreement between Svalbard Governor Kjerstin Askholt and Aleksandr Orlov, Vice President of Russian Association of Polar Explorers, was reached on 13th March.

That agreement did not come by itself. According to chief operations officer Irina Orlova, negotiations had proceeded for half a year and on several levels. After last year’s Barneo camp, the Russian organizers announced that they were moving all logistics to Franz Josef Land.

The dispute with Norwegian authorities appeared after it became clear that the Russian Armed Forces planned to use the Longyearbyen airport for bringing in military instructors to an airborne drill in the Arctic.

Check out this year’s first landing in Barneo