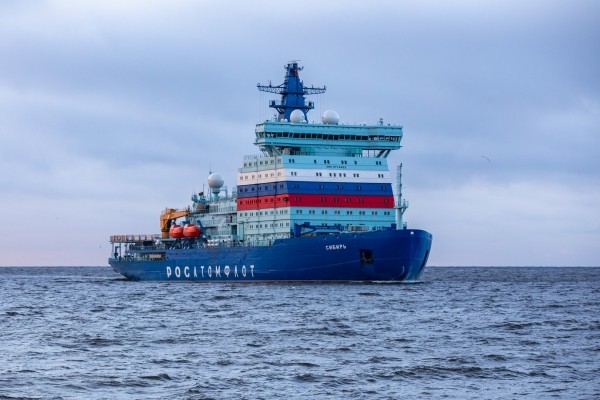 The "Sibir" is the second icebreaker of the 22220 class built in St. Petersburg. Photo: Baltic Shipyard

The "Sibir" will add to the rapidly growing fleet of powerful icebreakers tasked to keep the Northern Sea Route open for year-round shipping.
Read in Russian | Читать по-русски
By

The acceptance certificate was signed at a ceremony onboard the icebreaker at the Baltic Shipyard in St. Petersburg on December 24, Rosatomflot informs.

“The commissioning of the first serial universal nuclear-powered icebreaker “Sibir” will strengthen the position of Rosatomflot in the Arctic region,” said Mustafa Kashka, General Director of Atomflot, the service base for Russia’s fleet of civilian nuclear-powered vessels in Murmansk.

“We are confident that the efficient operation of these vessels will become a determining factor in the sustainable development of shipping in the water area of the Northern Sea Route,” he added.

Construction of the “Sibir” started in autumn 2015 and the icebreaker will as soon as all preparations are done, sail north around Scandinavia to her new homeport in Murmansk on Russia’s coast to the Barents Sea.

Rosatomflot says in the press statement the icebreaker then will start working for the winter/spring season 2022 to break the ice along the Northern Sea Route.

Powered by two RITM-200 light-water reactors designed to produce 55 MWe, the vessels of the 22220 class are the most powerful icebreakers ever built. The “Sibir” is the second vessel to enter service after “Arktika” was handed over last year.

Three additional icebreakers of the class are under construction at the Baltic Shipyard, the “Ural”, “Yakutia” and “Chukotka”, scheduled to be put in operation from 2022 to 2025.

Rosatom has also hinted that yet another two icebreakers of the class would be needed to manage year-round shipments on the Northern Sea Route.

Transit shipments from the Bering Strait in the east to the Barents Sea in the west has increased significantly over the year. By mid-October, more than 1,5 million tons of goods were shipped transit, an increase of more than 80 percent from the same period in 2020, the Russian Sea and River Transport Agency informs.

Major parts of the remote Arctic waters were covered by a quickly growing white sheet already in late October, and by early November the sea route was hardly navigable for ships without the highest ice-class.

In addition to the 22220 class icebreakers, Russia is also developing the Lider, an even more powerful vessel that will be capable of opening large shipping lanes through the ice for major convoys. The Lider will be built at the Zvezda shipyard in Russia’s Far East. Contract for the first was signed last year.

While the “Sibir” and her sister-ships are capable of operating in up to 4 meters thick ice, the Lider class will be capable of crushing even thicker ice. And maybe more important: the Lider class is 13,5 meters wider, allowing for even bigger ships to be assisted through the Northern Sea Route.

Both the new “Arktika” and the new “Sibir” are named after older nuclear-powered icebreakers now taken out of operation. The former Sibir was in operation from 1977 to 1992. After being laid up at Atomflot in Murmansk for 23 years, the ship was in 2016 towed to the Nerpa shipyard for scrapping.

With the “Sibir” now in operation, Russia has a fleet of six nuclear-powered icebreakers: ”Taymyr”, “Vaygash”, “50 Let Pobedy”, “Yamal”, “Arktika” and “Sibir”. Also, the nuclear-powered cargo ship “Sevmorput” belongs to Rosatomflot’s fleet based in Murmansk.