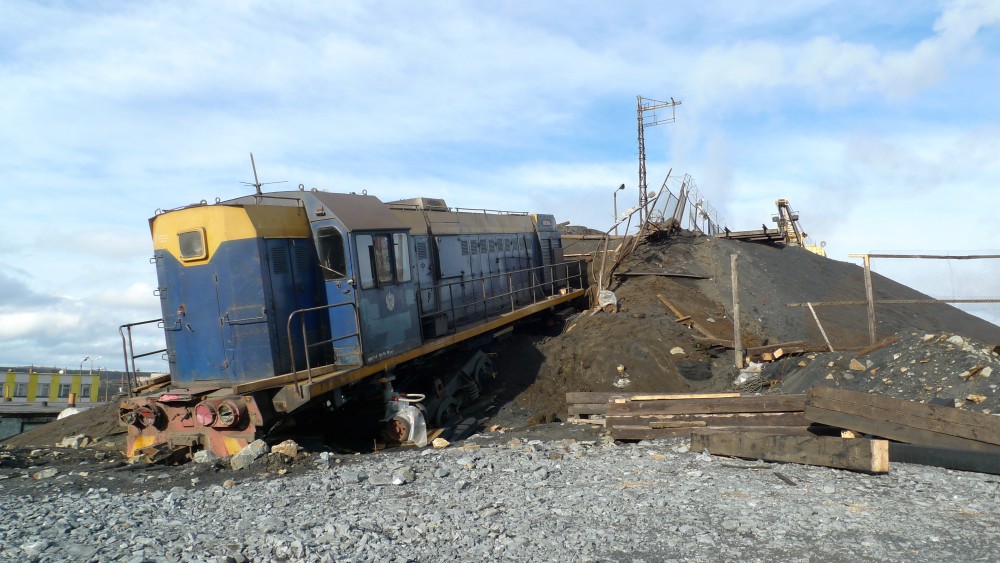 Building infrastructure in the Russian Arctic can be challenging. Photo: Thomas Nilsen

Still unclear who will possibly pay for the 500 kilometers long railway from Karpogory in Arkhangelsk region to the not-yet-built port in Indiga on the eastern coast of the Barents Sea.
Read in Russian | Читать по-русски
By

President Vladimir Putin on Friday instructed Prime Minister Mikhail Mishustin to speed up plans for a brand new rail link to the ice-free Barents Sea in the Russian Arctic.

The short order posted on the Kremlin’s portal calls on the Government to “submit proposals for the creation of a railway route to the Barents Sea in the area of the bay of the Indiga River.”

Plans to build an Arctic rail link to the village of Indiga has been on the table for years but with little progress.

Port facilities will be built with private funding as billionaire Roman Trotsenko, owner of AEON corporation, last year presented an investment plan aimed to start construction in 2024, as previously reported by the Barents Observer.

Who’s gonna pay for the rail link has so far been unanswered. The link is not included in any of the Russian railway’s long-term investment plans. Putin’s new order, however, could change that and obliges the government to give priority to the project.

Costs were in 2020 estimated by Arkhangelsk governor Aleksandr Tsybulsky to be 200 billion rubles. The rail link could eventually be included in Russia’s larger Arctic infrastructure strategy.

Making the Karpogory-Indiga attractive for transporters also depends on the larger Bailkomur railway plans. This stretch, from Solaminsk via Syktyvkar towards Arkhangelsk, will provide a direct route to the north from the industrial regions of the South Urals, Novosibirsk, Kuzbass and even transit cargo from Kazakhstan.

For AEON owner Roman Trotsenko, investments in Arctic infrastructure are nothing new. Last year, he confirmed construction of a coal terminal on the remote and desolate coast of Taymyr Peninsula. He also holds a 70% share in Russkaya Energia, a company that last December bought Vorkutaugol, the coal mining company in the town of Vorkuta.

Among Trotsenko’s assets are also the Moscow River Shipping Company and the Moscow South River Port.

A new export port on the coast to the Barents Sea will give a boost to the 80 million tons cargo target for the Northern Sea Route set by Vladimir Putin in 2018. The President said annual shipments between Europe and Asia via the north should reach such volumes by 2024.

Today, Russian railways face huge capacity challenges to Murmansk, the only ice-free port in the Arctic. With the port plans in Indiga, Russia will get a new export route that not only will relieve Murmansk, but also ports in the Baltic and the Black Sea region.

Combined with the rapidly growing fleet of powerful icebreakers aimed to keep the Northern Sea Route open for year-round shipping, the Indiga port will provide for a shortcut to markets in Japan and China for products like coal, timber, fertilizers, and chemical products.

As Moscow turns down coal deal at COP26, Russian miners get ready for a big Arctic dig