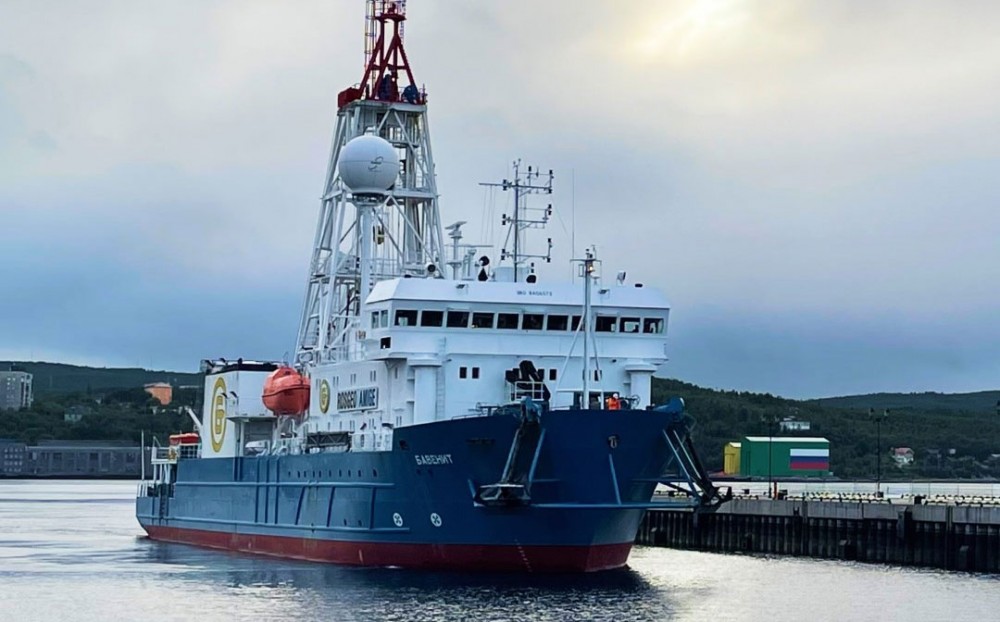 The Bavenit will drill the first ever wells in the Laptev Sea. Photo: Rosgeo

Several survey vessels are mapping the petroleum potential of the Laptev Sea and a drillship is on its way to spud the first ever wells in the area.
Read in Russian | Читать по-русски
By

The Bavenit on the 22nd of August set out from Murmansk with course for remote east Arctic waters. The ship, one of Russia’s most advanced vessels of the kind, is due to drill the first ever wells in the Laptev Sea.

According to Rosneft, there has never before been drilled a well in the shallow waters of the area. Drill cores from several wells will now help create a geological model of the region and determine the oil and gas potential, the company informs.

Rosneft controls four major license areas in the Laptev Sea; the Khatangsky, Ust-Uleneksky, Pritaymyrsky and Ust-Lensky areas. In addition comes a major license area that stretches north of the New Siberian Islands and into the East Siberian Sea.

The Bavenit is originally built in Helsinki in 1986 and recently underwent a major upgrade that allows it to engage in the northernmost parts of the Russian Arctic shelf. It is operated by the Murmansk-based AMIGE, a subsidiary unit of state mineral exploration company Rosgeo. In 2020, the ship was involved in drilling in the northern parts of the Kara Sea and earlier this year drilled a total of five wells at Gazprom’s license areas in the Barents Sea and Kara Sea.

The Bavenit is not the only ship that this summer engages in mapping of hydrocarbons in the Laptev Sea.

The Akademik Primakov in mid-August conducted major seismic mapping in the area, and the Akademik Lazarev later the same month headed towards the East Siberian Sea.

The former is Rosgeo’s new seismic vessel acquired from international oil service company Schlumberger in 2017. The ship is originally built in Ulstein, Norway, and previously carried the name Western Neptune.

The latter is originally built in Szczecin, Poland, in 1987, and is equipped to do seismic mapping in far northern waters. On the 23 of August, it sailed through the Vilkitsky Strait on its way to the East Siberian Sea.

In addition, several more research and survey ships are in the area, among them the Pyotr Kotsov, a 65 meter long vessel operated by Rosatom’s Hydrographical Company. The ship was on the 24th August located in the waters west of the New Siberian Islands. It is believed to be engaged in mapping of the seabed as part of Rosatom’s development of the Northern Sea Route.

By late August, practically all sea-ice had vanished from the Laptev Sea. However, there is still ice left in the Vilkitsky Strait, the waters that separates the Taymyr Peninsula with the archipelago of Severnaya Zemlya, as well as in the East Siberian Sea.

Russia has today only one producing project on the Arctic shelf, the Prirazlomnaya in the Pechora Sea. But the country has plans for several more fields. The jackup rig Perro Negro 8 in august 2021 started drilling at the Geofyzicheskoye field in the Gulf of Ob, and the Arkticheskaya drilled at the Skuratov field north of the Yamal Peninsula.

In addition comes the semisubmersible rig Severnoye Siyanie that is this fall due to drill in the Kara Sea, possibly at the sites recently explored by the Bavenit.