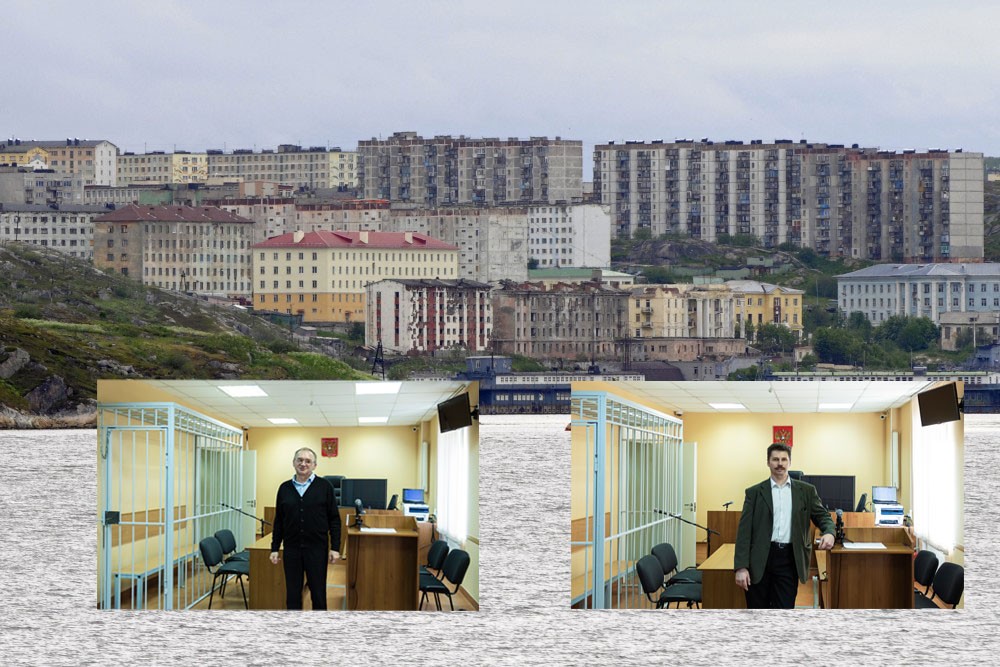 Roman Markin and Viktor Trofimov in the court room in Polyarny. Photos from the court room courtesy of Jehovah’s Witnesses. Photo from sea-side: Thomas Nilsen

Two men in the closed naval town of Polyarny on Russia’s Kola Peninsula were found guilty of extremist activities, but the judge did not agree with the prosecutor who asked for 6- and 6,5-years jail sentence.
Read in Russian | Читать по-русски
By

Jehovah’s Witnesses have been under pressure in the Murmansk region since FSB in April 2018 started to raid the homes of people suspected to organize meetings for believers in the religious group.

The campaign followed statements from the Orthodox church describing them as a dangerous foreign sect that erodes traditional values.

Russia’s Supreme Court banned all Jehovah’s Witnesses organizations throughout the country in 2017, arguing the group consists of extremists.

Jehovah’s Witnesses reject the allegation, saying they do nothing more than peacefully practicing their beliefs.

In Polyarny, Roman Markin got the security forces breaking down the door to his apartment in April 2018.

FSB and Rosgvardia that day raided five addresses in the town, home to the Northern Fleet’s diesel-powered submarines and a few navy surface ships.

Threatening Markin with automatic weapons, the officers forced him to lie on the floor while they searched his home. His 16-year-old daughter, who was present during the raid, also dropped to the floor and covered her head with her arms.

Roman Markin and Viktor Trofimov spent nearly half a year in pre-trial detention, followed by four months in house-arrest.

In court, the prosecutor had asked for 6 and 6,5-years jail sentence for the two.

The Polyarny District Court on Friday made its ruling in the case. The judge found Markin and Trofimov guilty but rejected the jail-term request from the prosecutor.

Jarrod Lopes, spokesman for Jehovah’s Witnesses at their world headquarters says to the Barents Observer after the verdict that the conviction is burdensome.

“We are happy for Roman, Viktor, and their families that the court did not sentence them to prison. However, it remains an injustice for these peaceful men to be convicted and stigmatized as “extremists,” a burdensome consequence for nothing more than peacefully practicing their Christian beliefs,” Lopes says.

Meanwhile, the FSB continues to raid apartments of the people suspected to be connected with the outlawed religious community in the Murmansk region.

In December, raids were made in five apartments in cooperation with the regional Investigative Committee. A big number of books and electronic information resources was confiscated and the people taking part in the gatherings, as well as their organizers and leaders, were identified and charged.

More than ten people were charged as previously reported by the Barents Observer.