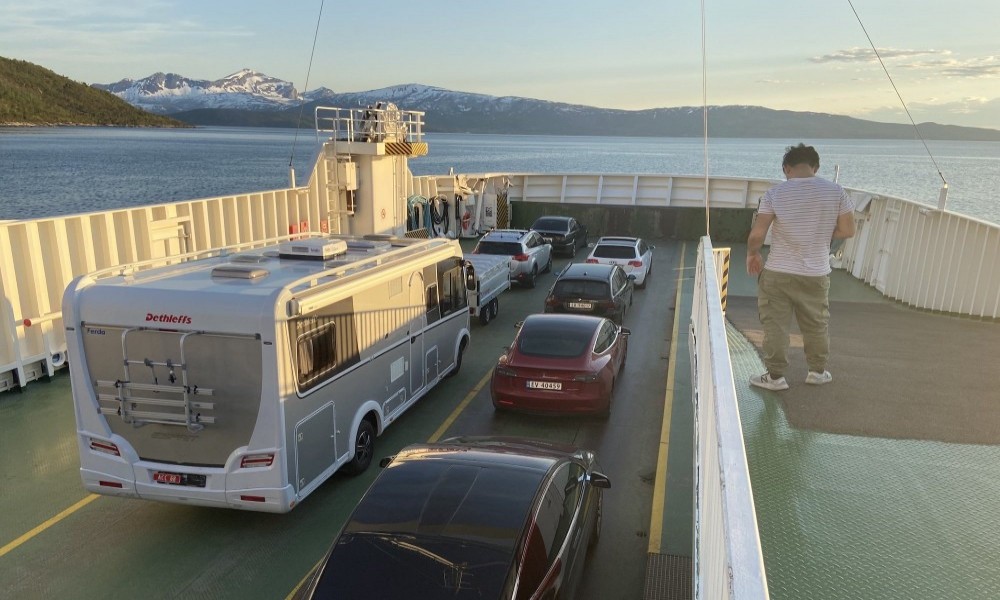 Ferry between Skarberget and Bognes under the Midnight sun. Photo: Thomas Nilsen

Norway’s successful transition to zero-emission transport sector continues. By the end of 2022, the last remaining ferry connection along European route E6, Bognes-Skarberget, will operate on batteries.
Read in Russian | Читать по-русски
By

“This makes it possible to drive without emission from Lindesnes to North Cape,” the Norwegian Public Roads Administration informs. Lindesnes is the country’s southernmost point.

Norway has for years encouraged people to buy electric vehicles by introducing a series of incentives, like no purchase taxes, cheaper or free drive-through toll roads, and reduced ticket prices on ferries.

Also, the ferries themselves are now turning to battery-power. The world’s first electric car and passenger ferry went into commercial operation in 2015 across a 6 kilometers wide fjord in Western Norway.

Now, time has come to introduce battery-powered car ferries in Northern Norway. The route Bognes-Skarberget is some 200 kilometers north of the Arctic Circle, a region with polar night and harsh cold-climate conditions during winter.

The 8 km route crosses Tysfjorden and takes about 25 minutes. This ferry is the only remaining ferry connection along European route E6, the main highway between southern- and northern Norway.

Onshore infrastructure at the ferry piers will include fast-chargers, filling up the batteries as cars are driving off and on, making ready for the next departure.

The two other ferry routes across Tysfjorden, Bognes-Lødingen and Drag-Kjøpsvik are also set to go zero-emission, the Public Road Administration informs in a press-release.

Contracts are signed with Fjord1 and Torghatten Nord, two of the main operators of ferries and passenger boats in Norway.

“Not long ago, many would say it would not be possible to operate an electric ferry on such a long and demanding stretch, but now we do,” says regional director Bjørn Laksforsmo with the Norwegian Public Roads Administration.

The electric ferries between Bognes and Lødingen will start sailing by January 1, 2024, while the two routes Drag-Kjøpsvik and Bognes-Skarberget will be zero-emission by December 1, 2022.

Norway is likely the world’s first country making it possible to travel all over without any tailpipe emissions. As previously reported by the Barents Observer, 8 out of 10 new cars sold in Norway nowadays are full-electric, and the share in the northernmost parts of the country is increasing despite cold weather and long-distance drivings.

Also, electric passenger planes are in the pipe. At Svalbard, the world’s northernmost battery-powered tourist ship sails out of Longyearbyen. Other electrified transport innovations include smaller fishing vessels, snow-mobiles, battery-powered buses and larger transport trucks. All supported by the world’s most comprehensive network of fast chargers.