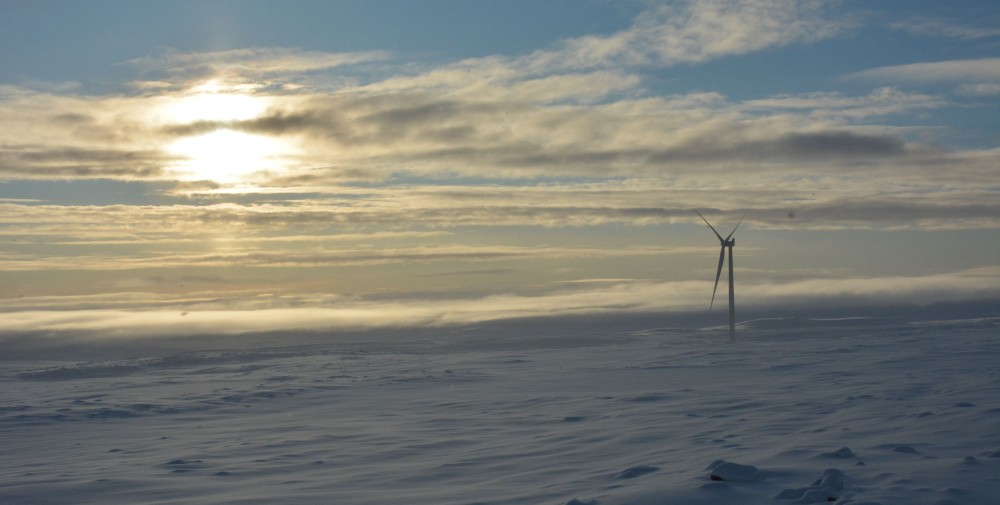 It was projected and built by Italian energy company Enel, but when the far northern wind power park was launched last week, the ownership had shifted to a consortium controlled by Lukoil and Gazprom.
Read in Russian | Читать по-русски
By

The building of a major wind power project on the open stretches of the Kola Peninsula has been under planning for almost two decades. Last week, the project finally became reality. On the stormy lands northeast of Murmansk City now stand 57 turbines ready to produce large amounts of renewable power. Production officially started on 1st of December, the project operator informs.

But the launch of Russia’s northernmost wind power plant did not go as originally planned.

Enel, the company behind project development, was not represented as the blades started to spin and the first power entered the local grid. The Italians in October sold its 56 percent stake in PJSC Enel Russia to PJSC Lukoil and the Closed Combined Mutual Investment Fund  “Gazprombank-Frezia.”

As result of the deal, Enel moved out of all its Russian power generation assets, including approximately 5.6 GW of conventional capacity and around 300 MW of wind capacity, the company informs.

That includes the Kolskaya Wind Farm.

The wind power project was to be a symbol of Russia’s investment in alternative power, and a flagship partnership with a leading western energy tech company. It is located along the Barents Sea coast where freezing winds rage across the lands through the whole year.

The Kolskaya Wind Farm has a 200 MW capacity and will be able to produce up to 750 GWh per year. Investments are estimated to €273 million. The 57 turbines are delivered by Siemens Gamesa.

The Italians won the tender to build the plant in 2017. It was part of a government bid to develop more renewable energy. The building of the plant started in 2019, and in 2021 at least 17 shipments of construction components and turbines were sent to the region.

«We are breaking ground on a strategic wind project […],» Simone Mori, Enel Group’s Head of Europe and Euro-Mediterranean Affairs, said in a ceremony held in connection with the construction start.

It was something quite new for the north Russian region of Murmansk.

«We we have strong winds, but no experience from this kind of industry», Vadim Glukhikh, leader of the regional Agency of Energy Efficiency told the Barents Observer in 2018. «It will be like a school,» he explained and underlined that experiences from the project could serve as example for other future Arctic wind projects.

The exit of Enel from the Russian market comes as part of an international exodus from the country. From before, a number of other foreign energy companies had left the country. That includes Fortum, the Finnish company that over many years has invested heavily in Russian energy, including green energy projects in Northwest Russia.

Wind power development in the Kola Peninsula had been under planning for many years. In the early 2000s, Dutch company Windlife Energy and its Russian subsidiary Windlife Arctic Power lobbied for the development of a similar project on the very same spot that Enel later started construction.

In a statement made in late March this year, Enel CEO Francesco Starace underlined that the situation in Russia no longer is acceptable. “We see growth in Russia in renewables but under these present circumstances I think it’s unpalatable and impossible. So, with regret, I think we have to fold,” he told Bloomberg.

With the Italians gone, a number of questions arise about the major wind project. Among them is whether the new owners will have the experience and qualifications to operate the wind farm. They might ultimately also face troubles getting needed spare parts and technology components because of the international sanctions.

It is also a question where the Kola Peninsula actually needs the power generated by the Kola Wind Farm.

The far northern Russian region from before has plenty of power, about half it from the Kola NPP and the rest from hydro power plants and black oil-fueled thermal plants.

Enel Russia in 2021 indicated that it intended to solve the problem by using the clean energy from the wind plant to produce green hydrogen. The company in 2021 joined forces with Rusnano, the state nanoindustry company, in elaborating the possible production of green hydrogen on site.

The development of the wind power project has been fraught with controversy. Environmental organization Bellona has argued that the Murmansk wind project is developed primarily because of the federal government’s desire to show off its focus on alternative energy.

«Like most big renewable projects in Russia, this is not about making money, but more about prestige,» Bellona consultant Yuri Sergeev told the Barents Observer in 2018.

Like Enel, the environmental organisation in November 2022 closed its offices in Russia after more than 30 years of operations in the country. “The war makes it impossible for us to continue,” Bellona leader Frederic Hauge said.