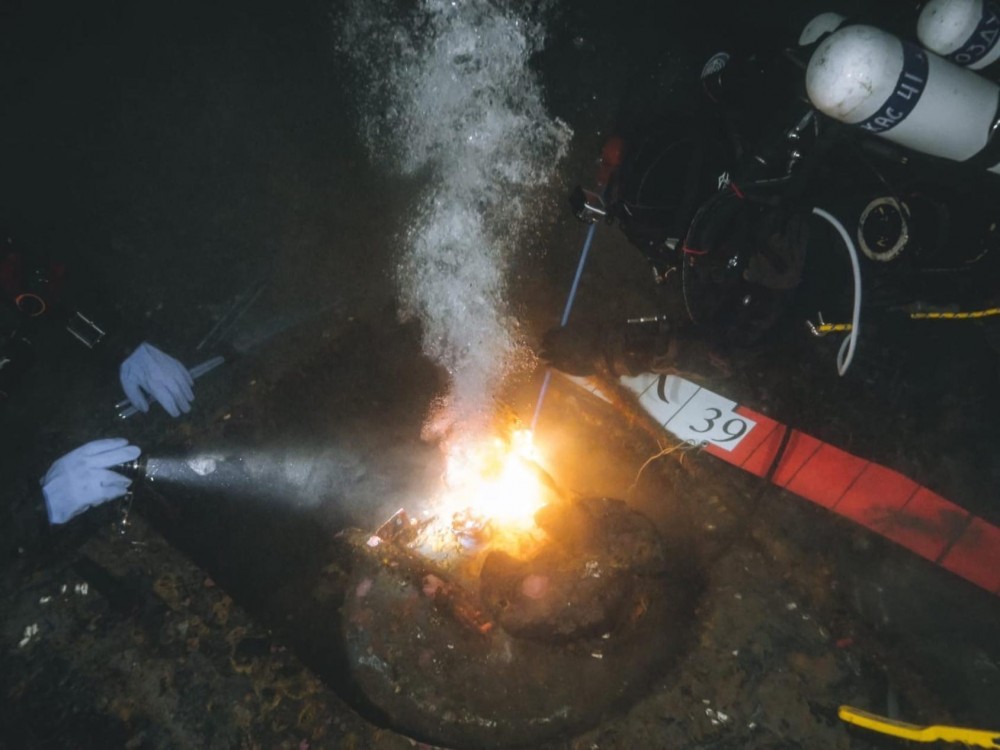 In September 2021, divers cut metal pieces of the hull of K-27. Photo: Centre for Underwater Research of the Russian Geographical Society

The Northern Dimension Environmental Partnership (NDEP) has decided to start a technical review aimed to find a safe way to lift two Cold War submarines from the Barents- and Kara Seas.
Read in Russian | Читать по-русски
By

“We are proceeding now,” says a smiling Jari Vilén, Finland’s Ambassador for Barents and Northern Dimension.

Projects aimed to improve nuclear safety are some of the few successful arenas for cooperation still going strong between the European Union and Russia.

“In ruffly two years time we will have the understanding on what and how it can be done, what kind of technology has to be used,” Vilén elaborates with reference to the two old Soviet submarines K-159 and K-27, both rusting on the Arctic seabed with highly radioactive spent nuclear fuel elements in their reactors.

The Barents Observer meets Vilén and former Prime Minister Paavo Lipponen in Rovaniemi as Finland presented the green agenda for its presidency of the Barents Council. It was Lipponen that in 1997, in Rovaniemi, initiated the Northern Dimension policy as a major part of the EU’s external relations.

For Finland, the Barents cooperation and the Northern Dimension Partnership are closely linked together, both structures aimed at providing practical cooperation between the European Union, Russia, Norway, and Iceland.

“The sunken submarines K-27 and K-159 are the potential source of contamination of the Arctic, the riskiest ones,” he says. “Assessments made by the European Union together with Rosatom show that in 20-30 years’ time the metals will start corroding and there is a genuine risk of leakage. Therefore, lifting them in the coming decade is extremely important.”

“I’m very happy we are making progress and that a decision to make a technical review has been decided by the European Bank for Reconstruction and Development (EBRD) through the Northern Dimension Environmental Partnership. Hopefully, when these technical reviews are done, we will come to a phase where we can make decisions on a lifting operation,” Vilén says with enthusiasm.

Lifting a nuclear submarine from the seabed is nothing new. It is difficult, but doable.

In 2002, the Dutch salvage company Mammoet managed to raise the ill-fated “Kursk” submarine from the Barents Sea. A special barge was built with wires attached underneath. The wreak of “Kursk” was safely brought in and placed in a dry-dock where the decommissioning took place.

K-159 is a November-class that sank in late August 2003 while being towed in bad weather from the closed naval base of Gremikha on the eastern shores of the Kola Peninsula towards the Nerpa shipyard north of Murmansk.

Researchers have since then monitored the wreck, fearing leakages of radioactivity from the two old nuclear reactors onboard could contaminate the important fishing grounds in the Barents Sea. A joint Norwegian-Russian expedition examined the site in 2014 and concluded that no leakage has so far occurred from the reactors to the surrounding marine environment.

However, the bad shape of the hull could eventually lead to radionuclides leaking out.

The two onboard reactors contain about 800 kilograms of spent nuclear fuel, with an estimated 5,3 GBq of radionuclides.

A modeling study by the Norwegian Institute of Marine Research said that a pulse discharge of the entire Cesium-137 inventory from the two reactors could increase concentrations in cod in the eastern part of the Barents Sea up to 100 times current levels for a two-year period after the discharge. While a Cs-137 increase of 100 times in cod sounds dramatic, the levels would still be below international guidelines. But that increase could still make it difficult to market the affected fish.

K-27, the other submarine in urgency to lift, was on purpose dumped in the Kara Sea in 1982. In September this year, divers from the Centre for Underwater Research of the Russian Geographical Society conducted a survey of the submarine’s hull. Metal pieces were cut free, the thickness of the hull was measured, along with other inspections of the submarine that has been corroding on the seabed for nearly 40 years.

As Moscow this spring took the Chair of the Arctic Council, the need to lift dangerous nuclear materials from the seabed was highlighted as a priority. Russia has also actively promoted cleanup of nuclear waste in its northern regions in several international forums, including with Norway and the EU.

In previous discussions on lifting the dumped reactors from the Kara Sea, a price tag of nearly €300 million has been mentioned. The sum includes K-27 and K-159, but also the other dumped reactors from K-11, K-19 and K-140, as well as spent nuclear fuel from an older reactor serving icebreaker “Lenin”.

No other places in the world’s oceans have more radioactive and nuclear waste than the Kara Sea.

While mentality in Soviet times was «out of sight, out of mind», the Kara Sea seemed logical. Ice-covered most of the year, and no commercial activities. That is changing now with rapidly retreating sea ice, drilling for oil-, and gas and increased shipping.

“This is actually a unique cooperation possibility where we have a common interest of the environment and interest of international cooperation, and of course there are also economical interests,” says Ambassador Jari Vilén.

“The value of the fishing stocks in the area is ruffly €1,4 billion annually,” he says.

The Ambassador underlines that no lifting should happen without a serious comprehensive risk-assessment study.

“We must be sure that the subs do not start leaking in the lifting operation. So we have to be very, very clear on what options we have.”

Today, it is the K-159 that poses the biggest risk to commercial fisheries. Rusting at a depth of 239 meters, the wreak is located in one of the most important fishing grounds of the Barents Sea, near the Kildin Island.

But also the K-27, along with all other nuclear waste dumped east of Novaya Zemlya threatens future fisheries in Russia’s Arctic waters. In 2018, the Federal Agency for Fishing said it was working to develop a promising program for fishing in the Kara Sea.

The Kara Sea has previously not been seen as a lucrative fishing ground. It’s far away from ports and inhabited areas, it’s cold and has been ice-covered most of the winter months. That is now about to change. Over the last decade, larger and larger parts, however, remain ice-free due to climate changes for longer parts of the winter.

The study program by the agency said the Kara Sea has rich stocks of polar cod and capelin. Also, halibut and snow crab are found in the waters.

Europe to pay half

According to Jari Vilén, a preliminary study estimates the cost of lifting K-159 and K-27, bringing them to a shipyard for safe decommissioning, will come at about €126 million.

“The European Union has already indicated that due to the responsibility that Russia bears from the Soviet Union legacy half of the cost has to come from the Russian side, another half will then come from the international partners. This is the current negotiation position we have.”

The Ambassador admits it is a dilemma that international partners are providing financial support to lift old Cold War submarines from the ocean, while Russia gives priority to building new nuclear-powered submarines threatening the security landscape in northern Europe.

“This is the discussion we generally need to have when the decision has to be taken. What is the common interest that we have, what is the interest of mankind and the future generations to make sure the environment is not dangerous to them and what is the Russian responsibility there,” Jari Vilén tells.

Meanwhile, nuclear safety and environmental projects are sailing up as the most promising open doors for joint cooperation the Nordic countries and the EU have with Russia under the current international tensions.

The NDEP has previously paid hundreds of millions of euros in the nuclear window for handling radioactive waste and spent uranium fuel in northwest Russia. Also, Norway has paid more than €200 million for joint cooperation with Russia on nuclear waste cleanup, mainly at the Kola Peninsula, since the mid-1990ties.

The Arctic Council in late 2019 took a formal decision to establish the Radiation Expert Group (RAD EG) under the Working Group on radiation Emergency Prevention, Preparedness and Response (EPPR).