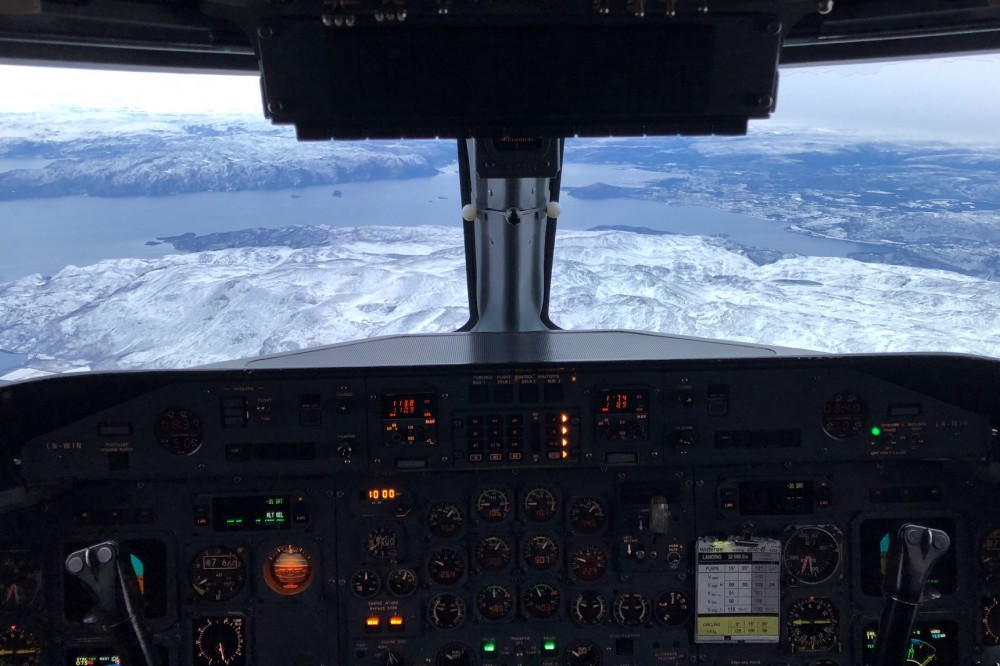 «Reasons to believe it could be related to military exercise activities outside Norway’s broders,» says the Civil Aviation Authority to the Barents Observer.
Read in Russian | Читать по-русски
By

Over the last week, pilots have experienced loss of GPS signals when flying the airspace from Kirkenes, the airport near Norway’s border to Russia, and as far west as Lyngen in Troms.

Lina Lindegaard, press-officer with Widerøe, confirms that a flight lost GPS signals in the beginning of the week.

«Our chief operating officer got a report from a captain about loss of GPS signals,» Lindegaard tells. She underlines that the crew in cockpit always have alternative procedures on how to navigate if satellite signals can’t be received.

«There are no security risks, we have good routines and this is not the first time we have experienced loss of signals.» Widerøe does not want to speculate in the reasons for why the signals disppeared. “There are many speculations, we choose not to speculate,” Lindegaard says.

«A few days ago, we got some reports about loss of satellite navigation for aircraft in Finnmark,» says Per Eirik Heimdal, Technical Director of the Norwegian Communication Authority (Nkom). The state agency is in dialogue with the aviation authorities and has previously measured jamming in Norway’s border area to Russia.

«In 2017, the jamming was connected to a [military] exercise east of Finnmark,» Heimdal tells.

Regarding this week’s loss of signals, Heimdal says «we have got some information from the defense.»

Spokesperson Lt. Col. Ivar Moen with the Joint Head Quarters writes in an e-mail that when discovering disturbances on GPS signals during military activities, this is routinely reported to AVINOR, Norway’s state-owned company operating civilian airports and responsible for air traffic control services.

The aviation authority has as a consequence of the reports this week issued a caution advice about irregular behavior reported on Global Navigation Satellite Systems (GNSS) for the airspace covering eastern Finnmark, including the airports of Kirkenes and Vadsø. Another NOTAM warns about «unstable GPS signals east of 025E» longitude in the Norwegian Ocean outside Tromsø for the period October 30 to November 7th.

Such warnings, known as NOTAM (Notice to Airman) are obligatory for all pilots to read, including passenger planes, military aircraft or private small planes. 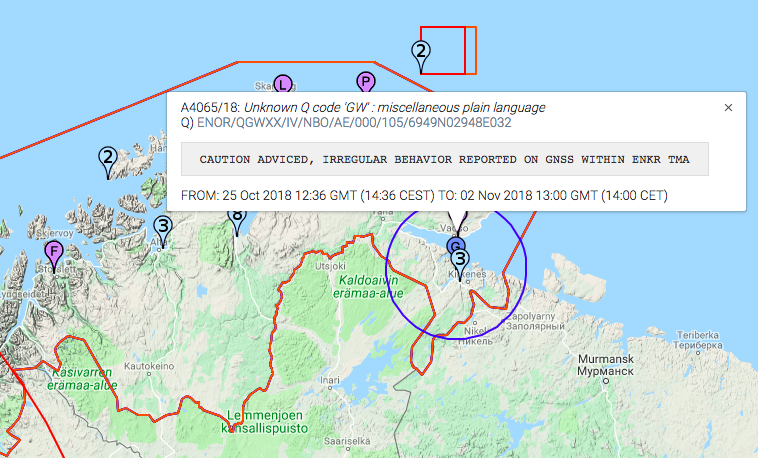 Wenche Olsen, Director of the Civil Aviation Authority of Norway says to the Barents Observer that her agency is also aware of periodically disturbances of GPS signals in Eastern Finnmark.

«It is difficult to say what the reasons could be, but there are reasons to believe it could be related to military exercise activities outside Norway’s borders,» Olsen says.

The Civil Aviation Authority has notified both the airlines flying in the area and AVINOR about the disturbances. Both SAS and Norwegian have daily flights to Kirkenes and Alta in Finnmark, while Widerøe has dozens of flights to the smaller airports around the coast of Finnmark.

Wenche Olsen says tests with jamming of GPS also happens in Norway, «but planned jamming is always notified up front and it is the National Communication Authority who gives permission to such activities.»

Bent André Støyva, Head of Section in the Norwegian Communication Authority says to the Barents Observer that no such permissions is given in the area of Finnmark this week.

Olsen underlines that there are good routines to notify when disturbances are discovered in specific areas. Airlines are always made aware when loss of GPS signals happens.

«It’s for the airlines themselves to consider which measures to be taken regarding their flights. There are backup solutions to GPS, like ground-based navigation systems. Safety in the skies is therefor never endangered even when GPS signals are lost.»

Further south in Norway, NATO’s huge exercise Trident Juncture is going on, involving more than 50,000 soldiers from 31 countries, including Sweden and Finland. Although most of the wargames happens far south of the Arctic Circle, the northern military airports in Rovaniemi (Finland), Kallax (Sweden), Bodø and Andøya (Norway) serve fighter jets, support- and surveillance aircraft participating in Trident Juncture.

Russia has expressed dismay about the massive NATO exercise.

The Northern Fleet, based on the Kola Peninsula, has announced missile shootings starting next week just a few nautical miles outside Norway’s territorial maritime boundaries in the Barents Sea north of Finnmark.

Russian strategic bombers have been on missions along the coast of Norway two times this week, on Wednesday and on Friday.

Last September and October, the loss of GPS signal over Eastern Finnmark was tracked to jamming from Russia’s large-scale military exercise Zapad-2017. For about a week both SAS and Widerøe flights to airports in Finnmark lost satellite navigation. Also in March this year, GPS signals disappeared occasionally.

There are several military camps in the Pechenga valley a few kilometers from the border to Norway. Following the jamming earlier this year, Norway’s Ministry of Foreign Affairs contacted Russian authorities with requests to halt jamming in the borderland.

Russia has invested heavily in electronic warfare equipment in recent years and are drilling its forces in how to shut down GPS-, radio-, and mobile phone signals. It is said that a one-kilowatt portable jammer can block a GPS receiver from as far away as 80 kilometers. The Northern Fleet’s Arctic 200th Independent Motor Rifle Brigde in Pechenga is 55 kilometers from Kirkenes airport.

Larger gear, like the Russian armed forces’ R-330Zh jammer, has capability to disturb GPS signals over far longer distances, depending on the terrain. In 2017, satellite navigation systems on board planes disappeared as far west as Alta, some 250 km west of Norway’s border to the Kola Peninsula.

By several occasions this year, GPS jamming events have been reported by aircraft operating in the Eastern Mediterranean near Syrian airspace.

With more technology in cockpits, passenger airplanes are increasingly dependent on satellite navigation. That be the American GPS, Europe’s Galileo or Russia’s Glonass, commonly known as GNSS. Approaching airports and when flying with autopilot, satellite navigation is modern days equivalent to radio navigation and air-to-ground based navigation systems.

For military purposes, GPS jammers are created to confuse the enemy on exact locations. Signals could either be totally lost, or worse, misreport the aircraft or a ship’s position.

Such spoofing of satellite signals has previously been reported from the Black Sea, where a number of ships in June 2017 reported anomalies with their GPS positions. Reports in Russian media two years ago told the stories of people finding their mobile phone GPS receivers showing them far away from their actual position. The phenomenon was mostly experienced within the sight of the Kremlin walls.

All airports with commercial flights in Norway, though, still have radio and other instrument landing systems pilots use when approaching the runways. Those include the beacons and red lights you can see in the terrain around airfields.