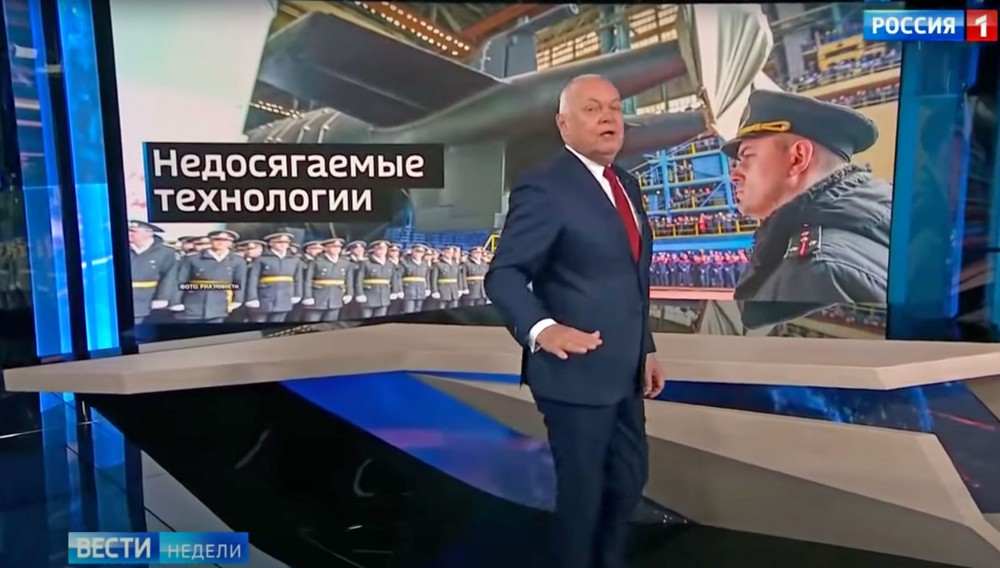 Presenter of Kremlin's information tool Vesti nedeli (news of the week), Dmitry Kiselyov, propagated the Belgorod submarine as the shipbuilder in Severodvinsk drew the vessel out of the ship-house in 2019. Screenshot from Rossiya 1, Vesti

Russia's two newest special-purpose submarines, the Belgorod and the Khabarovsk, could redefine underwater warfare when they within some years sail out from the shipyard in Severodvinsk.
Read in Russian | Читать по-русски
By

Recap: It was the first major Northern Fleet exercise in more than ten years, supposed to show the world how Russia’s post-Soviet navy was still capable of flashing muscles, at least in home-waters. But a failed launch of a torpedo instead proved the state of the ill-fated nuclear submarine force.

August 12, 2000 became the saddest day in the modern history of the Northern Fleet.

The entire world could for two weeks in August 2000 watch live on TV how the one rescue effort followed by the other failed. None of the 116 crew members and two weapons experts onboard survived.

It all started earlier that year. Acting President Vladimir Putin won the 2000 Presidential election on March 26. Shortly after, on April 6, Putin went to the Northern fleet’s main base Severomorsk where he embarked the strategic nuclear-powered missiles submarine Karelia and set off for the Barents Sea. He spent the night onboard, watched the launching of a Sineva intercontinental missile and praised the submarine fleet as the mainstay of Russia’s nuclear deterrent.

Also, the president made clear Russian submarines again should sail the world’s oceans, after mainly staying in their ports during the 90ties.

Following the April instructions of the president, the Northern fleet started to prepare for the largest naval exercise in years. Kursk – the Oscar-II class submarine carrying cruise-missiles and torpedoes, was supposed to have a special role; first to participate in the August Barents Sea exercise; thereafter to sail to the Mediterranean to show the world that the Russian navy no longer stays in port.

Kursk never made it to the Mediterranean. She sank northeast of Murmansk in the Barents Sea after a torpedo explosions onboard.

First 48 hours later, in the morning on August 14th, the first news about the ill-fated submarine was released. First, the Russian Northern fleet didn’t want any rescue assistance from abroad. When it became clear that their mini-rescue submarine was not able to operate properly, assistance from Norway and Great Britain was accepted. The following Russian, Norwegian, British rescue operation became ad-hoc, learning by doing while fighting against the clock.

Seven days after the sinking, Norwegian divers finally were able to open the rear hatch. No air bubbles came out. The entire hull was filled with water. There were no survivors.

Putin himself chose not to return from his summer residence by the Black Sea before it became clear that there were no survivors. When he first appeared in Vidyayevo, the homeport of Kursk on the Kola Peninsula, the president was bashed for his alleged mishandling of the disaster. Putin learned something about live TV-broadcast that day in Vidyayevo.

That lesson costed Russia most of its press freedom.

Kursk was one of four Oscar-II class nuclear-powered multipurpose submarines sailing for the Northern Fleet. The three others, the Voronezh, Smolensk and Orel are still in operation.

Construction of a fifth Oscar-II submarine, the Belgorod, was put on hold three years before Kursk sank. In September 2000, though, it was decided to resume construction, but little happened as the Sevmash yard in Severodvinsk was out of money and Moscow had little to offer.

The Belogorod was at the time 75 percent ready. In 2012, it was decided to convert the submarine to be of the Project 09852, a super secret vessel to sail for GUGI, Russia’s military Main Directorate for Deep-Sea Research. GUGI vessels are based in Olenya Bay on the Kola Peninsula and in Severodvinsk by the White Sea.

When launched from the ship-house in April 2019, The Barents Observer reported the 184 meters long Belgorod to be the world’s longest submarine. More interesting is the missions she will sail.

The extra space in the prolonged hull has room to carry equipment for deep-sea operations, like small-sized nuclear-reactors aimed to provide power to secret military installations on the Arctic Sea bed.

Underneath the hull, mini-submarines like the Losharik or other spy-submarines can be attached. Surrounded by secrecy, it is also said the Belgorod will carry six of the terrifying Poseidon drones, a doomsday weapon the world has never seen before.

Poseidon is also the common denominator between the Belgorod and the next proto-type submarine currently under construction in Severodvinsk, the Khabarovsk (Project 09835).

Expected to be launched later this year, she is the first of a whole new category of submarines. Underwater warfare specialist H I Sutton, who runs the Covert Shores web portal, describes the new vessel to likely be the defining submarine of the 2020s because it represents a novel and difficult adversary.

“The Russian Navy is quietly developing a whole new category of submarines, and their unique capabilities could influence the nature of undersea warfare,” he writes in an analytic article published by Forbes.

No photos of the Khabarovsk has appeared in public domains, but drawings suggest the new submarine has a hull based on the existing ballistic missile carriers of the Borey-class. While not carrying ballistic nuclear missiles, the vessel will carry the Poseidon nuclear-powered drone. Six of them, if public available suggestions are correct.

“Unless there is a change in Russian plans, Khabarovsk will likely be a new focus of Western anti-submarine warfare for the next decade, in particular the U.S. Navy and Royal Navy, whose nuclear submarine fleets have a long tradition of stalking Russian boats,” Sutton writes.

He added: “The Poseidon-armed boats will present new challenges to these hunters.”

Two more submarines of the Project 09835 are planned.

TASS, a Russia state-affiliated news-agency, reported the Poseidon drone to be able to carry a nuclear warhead with a capacity of up to 2 megatons to destroy enemy naval bases.

The drone is reportedly capable of diving to 1,000 meters and due to its reactor-propulsion it has an inter-oceanic range. With Poseidon, Russia’s nuclear deterrent gets a new leg.

It was a torpedo that caused the sinking of the Kursk.

The worse-case consequences of a major accident when test-exercising with a Poseidon carrying nuclear submarine in northern waters is maybe unimaginable.

And be sure, the lessons of secrecy by the military during the days of the Kursk disaster are not gone. Last year’s fatal accidents with the nuclear-powered Losharik submarine and the Burevestnik missile clearly showed what can be expected.