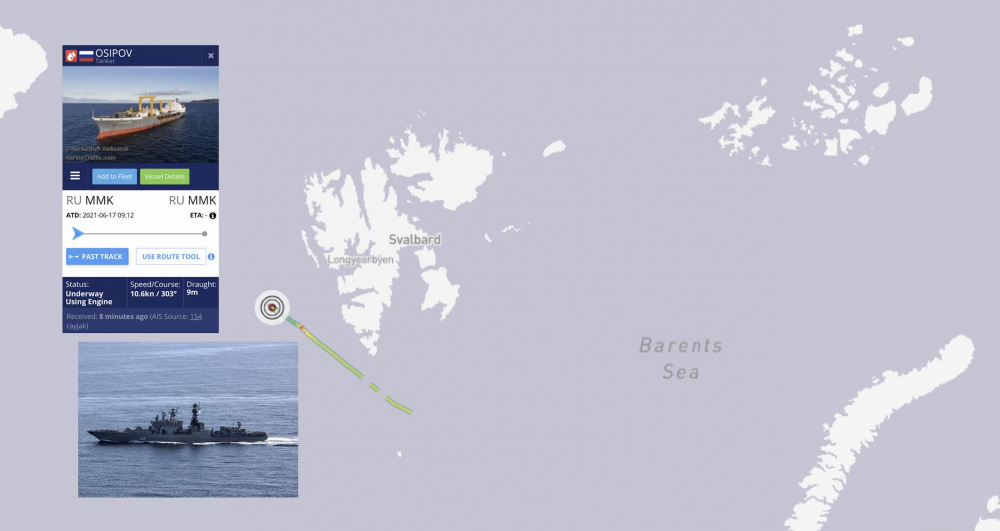 The Northern Fleet tanker "Sergei Osipov" sails together with the anti-submarine warship "Severomorsk" and likely the rescue tugboat "Pamir". Wednesday morning, the vessels sail in direction northwest into the Greenland Sea, west of the island of Spitsbergen. Map: Barents Observer / MarineTraffic.com

The anti-submarine destroyer Severomorsk leads the Russian navy group, said to carry out “a set of measured aimed at protecting the interests of the Russian Federation in the Arctic.”
Read in Russian | Читать по-русски
By

Norway is monitoring Russian warships that suddenly turned west in the northern part of the Barents Sea after an exercise near Franz Josef Land earlier this week. The vessels started to sail towards the Svalbard archipelago on Tuesday and made a northwestern course after passing the southern tip of Spitsbergen island.

Wednesday morning, the voyage continued northbound until around noon, when the vessels turned south again west of the inlet to Isfjorden. What mission the ships have so close to the Norwegian archipelago seems unclear.

Ivar Moen, the spokesperson with the Norwegian Armed Forces’ joint operational headquarters’ says to the Barents Observer that the Russian navy movement deviates from previous voyages into the Arctic waters.

“This differs from what we have seen before,” Ivar Moen says.

“We are monitoring the vessels’ activities” he adds.

Lead by the large anti-submarine destroyer “Severomorsk”, the vessel group forms the annual Northern Fleet’s mission to the high Arctic. The vessels left the Kola Bay for the Barents Sea last Tuesday. This is the 10th year in a row that warships from Severomorsk sail a special voyage towards the Russian archipelagoes along the Northern Sea Route.

It is, however, the first time such Arctic voyage makes a surprise turn to the western Arctic and waters around Norway’s Svalbard archipelago.

There is currently no sea ice north of Svalbard, making it easy to circumnavigate the archipelago.

Additional to “Severomorsk”, the group consists of the military tanker “Sergei Osipov” and the rescue tugboat “Pamir”. The tanker is the only vessel sailing with its AIS activated, making it possible to track the voyage. According to MarineTraffic, the vessels were at the nearest about 20 nautical miles from the coastline at Spitsbergen, sailing in international waters.

On Monday, the Northern Fleet’s press service informed about the vessel group conducting a joint exercise in the Barents Sea south of Franz Josef Land together with the FSB Coast Guard vessel “Polyarnaya Zvezda”. The tactical exercise included how to prevent an unauthorized intrusion by a foreign vessel into Russian sovereign waters.

Before sailing west, the Northern Fleet said in the same press statement that the Arctic group of warships “will take part in several exercises to defend islands and continental territories of Russia in the Arctic, as well as to ensure the safety of maritime navigation and other types of Russian maritime economic activities in the Arctic zone.”

The 10th annual Arctic patrol will last for about two months, the Northern Fleet informs.

In previous years, the Northern Fleet’s Arctic voyages in August and September along the Northern Sea Route have exercised anti-terror and attack landing operations at locations like Dudinka by the Yenisei River, north on the Taimyr Peninsula, and at the island of Kotelny at the New Siberian Islands in the Laptev Sea.

In early August, a group of about 30 Northern Fleet warships took part in a larger command and staff training exercise, where also coastal forces on the Kola Peninsula and airforce participated.

While some vessels and submarines were sailing the Barents Sea, and others, as part of an inter-fleet transit from the Baltic Sea to the north, were exercising just north of the United Kingdom in the North Sea for several days.

That exercise was said to show the military commanders the degree of preparation of forces that will participate in the large-scale strategic exercise Zapad-202, scheduled for mid-September.

Admiral Aleksandr Moiseev has previously said participating in Zapad 2021 will be the Northern Fleet’s “main efforts” this year.

The exercise will demonstrate the capabilities and readiness of the Western Military District and the Northern Fleet and is co-arranged with the dictatorship in Belarus.