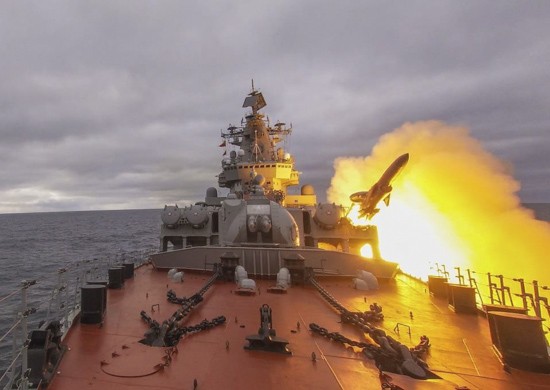 More than 3,000 soldiers with heavy weapons were fighting in the border areas to Norway and Finland on the Kola Peninsula. Simultaneously are warships, aircraft and Arctic bases training on protecting Russia from a fake invader to the Barents Sea region.
Read in Russian | Читать по-русски
By

As Russia and Belarus are integrating their countries’ military and economies, exercise Zapad-2021 causes concerns among neighboring counties Poland and the three Baltic states. The military drills include 200,000 soldiers, mostly from Russia and Belarus, but also including troops from Kyrgystan, India, Armenia, Kazakhstan and Mongolia.

Heightened tensions with the West over developments in Belarus are real, but the scenario for Zapad-2021 involves a simulated enemy consisting of forces from a Western coalition of states called Nyaris, Pomoria and the Polar Republic.

Michael Kofman with the Centre for a New American Security writes about the three fake enemy countries in a commentary for War on the Rocks:  “While Nyaris appears to represent Lithuania and Pomoria is probably a stand-in for Poland, the Polar Republic is likely intended to represent Norway or another Scandinavian state, heralding a significant role in Zapad-2021 for Russia’s Northern Fleet Joint Strategic Command.”

Speaking with Nezavisimaya Gazeta, deputy head of the Main Directorate of International Military cooperation under the Defence Ministry, Yevgeny Ilyin, confirmed the naming “Polar Republic” being the conditional adversary in the Zapad-2021 exercise. Illyn, however, underlined the strategic exercise “is purely defensive in nature and does not consider specific countries as enemies.”

Nothing is said in official statements from the Northern Fleet about the “Polar Republic” being the simulated attacker in the drills taking place on the Pechenga Region on the Kola Peninsula, or at the military training grounds outside Kandalaksha closer to the border to Finland. However, the “enemy” attacking Russia in the Arctic sails in from the western Barents Sea.

“The Bastion coastal missile system deployed on the Aleksandra island oil Franz Josef Land launched and destroyed a group of imaginary enemy ships,” the press service informs. The anti-ship cruise missile hit the target in the Barents Sea at a maximum range. A large area south of Franz Josef Land has been closed off for civilian shipping for the period the exercise happened. The new frigate “Admiral Kasatonov” took part in the operation from the seaside.

In another statement, the powerful Northern Fleet tells about the launching of cruise missiles from the nuclear-powered battle cruiser “Pyotr Velikiy” and the missile cruiser “Marshal Ustinov” towards a simulated enemy amphibious assault force in the Barents Sea. Also here, the waters north of the Kola Peninsula for missile shootings were closed off for civilian vessels.

Last week, the Barents Observer reported about fishermen troubled by escalating Russian war games in the Barents Sea. Trawlers are with short notice forces to leave fish-rich areas and sail to other far-away locations where the navy is not exercising.

The new frigate “Admiral Kasatonov” took part in the operation from the seaside.

On land, more than 3,000 soldiers with some 500 different pieces of military vehicles, weapons and equipment are part of the ongoing Northern Fleet’s Arctic exercise. Heavy shootings with tanks, multiple launch rocket systems, artillery and armored vehicles are carried out in the Pechenga valley near Russia’s border to Norway. Par of the war game took place on the Fishermen Peninsula and Sredny Peninsula, the latter only a few nautical miles east of Norway’s Grense Jakobselv.

The land-troops were supported by Su-24 bombers, attacking the mock enemy consisting of ground groups and amphibious assault forces.

About 8,000 military personnel, 50 warships, 120 aircraft and helicopters have been involved in the different stages of the Arctic drills that kicked off on September 8, news agency Interfax reports. The Barents Observer previously reported on the troops and navy vessels involved in the drill on liberating an Arctic seaport occupied by enemy forces. This happened in Dudinka, in the far northern Taymyr Peninsula.

Parts of the combat training in the Pechenga district included electronic warfare, according to the statement by the Northern Fleet. No further details were given. During Zapad-2017, Russia’s neighbors in Finland and Norway strongly complained about GPS jamming from military forces on the Kola Peninsula. The jamming caused special concerns among civilian police- and rescue services, as well as among civilian airliners flying in the north.

No such complaints are until now during Zapad-2021 raised from the Nordic countries. Neither has aviation authorities noticed any GPS jamming in the eastern Finnmark region on the Norwegian side of the border.

On September 11, the nuclear-powered Oscar-II class submarine “Orel” conducted a live fire exercise in the Barents Sea. From submerged position, a P-700 Granit cruise missile was launched against a surface target at a distance of 100 kilometres. The Northern Fleet posted this video of the submarine’s missile launch.

The Admiral added that during the exercise, NATO countries like USA, Great Britain and Norway showed high activity with naval and air reconnaissance forces.

“Up to 17 sorties into the airspace of the Barents Sea and the regions in Finland border Russia were carried out by patrol and reconnaissance aircraft from USA, Norway and Finland,” a statement from the Northern Fleet on September 15 says.