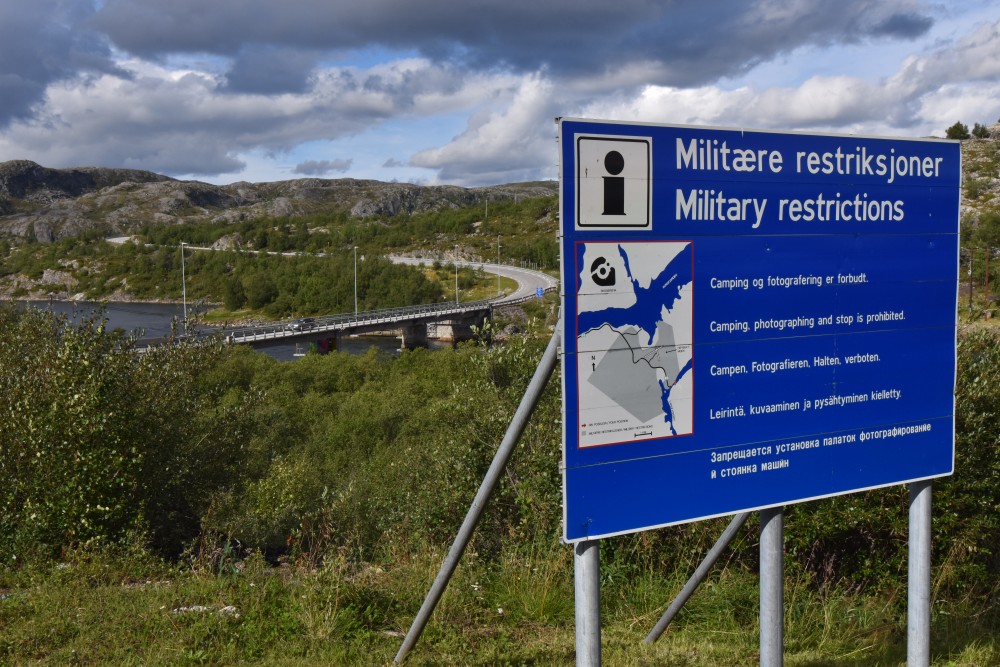 The Strømmen Bridge is strategically important as it is the only road linking the border town of Kirkenes with the rest of Norway. Photo: Thomas Nilsen

Crew members from Murmansk-based trawler “Melkart-5” is fined by police after they lowered a small boat on the water and left the harbor area in Kirkenes. Norway is the only EU-associated country allowing Russian fishing vessels to make port calls.
Read in Russian | Читать по-русски
By

“It seems like the Government doesn’t understand the potential threat posed by Russian trawlers in such important NATO area,” she says to the Barents Observer.

“Putin himself has signed the new maritime doctrine outlining that fishing boats are part of the country’s military capacity. That in itself should be enough evidence that the trawlers should not be allowed to call at Norwegian ports,” she states.

It was in July the trawler “Melkart-5” stayed at port in Kirkenes. In accordance with Norwegian regulations, seafarers are allowed onshore without entry or exit checks, but have to stay in a geographical delimitated area decided by the Chief of Police.

Ensuring compliance with the regulation, however, is for the most based on trust and no physical control.

On July 17th, the Russian seamen lowered a small boat and set off to Langfjorden in direction of Strømmen bridge, the only road connecting Kirkenes area with the rest of Norway.

“I can confirm that people belonging to the Russian fishing boat “Melkart-5” is fined for violating shore leave regulations by driving a small boat to Strømmen bridge,” says Chief of Police in Finnmark, Ellen Katrine Hætta.

During the Cold War, Norwegian military was tasked to blow up that particular bridge as a measure to slow invading forces. In recent months, soldiers from the Garrison of Sør-Varanger (GSV) are again frequently seen exercising near the bridge.

Sandbags are placed by the shore on the west side of the bridge in what seems like preparedness for establishing a fast-created shelter. A few meters up the hill is a reinforced sandbagged trench serving as shelter for shooters.

The Strømmen bridge is surely a strategic important infrastructure in case of military conflict in Norway’s border area to the heavily militarised Kola Peninsula.

Russia’s war on Ukraine shows how important bridges are for movements of military forces.

While Russian private cars, freely allowed to drive the E6, will be Customs controlled at Storskog checkpoint when entering Norway, most fishing boats could in case of conflict bring explosives, mines or other harmful gear to Strømmen bridge or nearby military installations from port in Kirkenes where the vessels are seldom controlled by authorities.

Up the hill from the bridge is the main camp for Garrison of Sør-Varanger, with hundreds of soldiers in charge of guarding the 198 km long border to Russia.

“We must prevent, detect and counter intelligence, sabotage and influence from foreign states,” Minister of Justice and Public Security, Emilie Enger Mehl, told the Barents Observer.

The Chief of Police assures that her officers keep all eyes open, including towards the changing security threats rising after February 24th when Putin’s forces brutally attacked Ukraine.

“The police monitor all activities and is aware of the annual threat assessment by the Police Security Service (PST) that also highlights Russia,” Ellen Katrine Hætta says.

She adds that the police are in dialog with all owners of critical infrastructure, not only the defense establishment.

Parliament member Guri Melby is concerned and says it is worrying that the Government can’t control who and what is onboard Russian trawlers allowed to enter Norwegian ports.

“Either they do not check, or they know exactly what happens, but chose not to do anything about it. Both variants are equally bad,” Melby says.

She underlines that it is more important than ever that Norway stays together with neighboring countries and the EU in times of war in Europe.

“Enormously powerful sanctions are required and all countries, without exceptions, must agree on. The Government can’t continue to undermine the EU’s sanctions, so it is obvious that Norway should have the same port ban as the EU, Guri Melby makes clear.

It was in late April the Government announced it would follow the European Union’s decision to close seaports for Russian vessels, but made an exception for fishing boats. No other European countries are today allowing Russian trawlers to make port calls.

“In our opinion, it is bad that Norway with its policy gives big Russian fishing oligarchs, and thus in practice the Russian war machine, a handshake,” the Editorial reads.

So far in 2022, Russian fishing vessels have landed about 90,000 tons of fish worth 1,5 billion kroner (€150 million) at ports in Norway. That is 415 million kroner (€41 million) more than the same period last year, according to Fiskeribladet.

“Melkart-5” left port in Kirkenes on July 20th, the day after her crew was fined by the police. The trawler is currently fishing north of the Kola Peninsula in the Russian sector of the Barents Sea.

The incident in Kirkenes, however, is not first time the Murmansk-based trawler has sailed into spotlight of attention.

In early January this year, one of two submarine fiberoptic cables connecting Svalbard with mainland Norway was cut in the Greenland Sea west of Spitsbergen. A month later, a preliminary police investigation concluded that the break was caused by human activities.

The cable is operated by Space Norway, and also serves the SvalSat park of more than 100 satellite antennas. SvalSat is today the world’s largest commercial ground station with worldwide customers. Its location at 78°N, halfway between mainland Norway and the North Pole, gives the station a unique position to provide all-orbit support to operators of polar-orbiting satellites.

AIS-tracking data, published in a longer article by the Norwegian Broadcasting Corporation NRK for the period January 5-9 shows that four Russian fishing vessels, among them “Melkart-5”, were crossing back-and-forth in the waters over the cables. The break was discovered on January 7th.

In the days before and after the break was discovered, “Melkart-5” passed over the cables 20 times. The shipowner, Murman SeaFood, said to NRK that they had nothing to do with the troubled fiber-optic cable. Later, when making port call to Båtsfjord, the crew was questioned by Norwegian police.

The police, later on, closed the case without any further allegations against neither “Melkart-5” nor any of the other Russian fishing vessels sailing the area at the time.

The case is closed and unsolved.

Murman SeaFood has not replied to questions from the Barents Observer about the intention of lowering the small boat and going to the waters around Strømmen bridge near Kirkenes on July 19th.