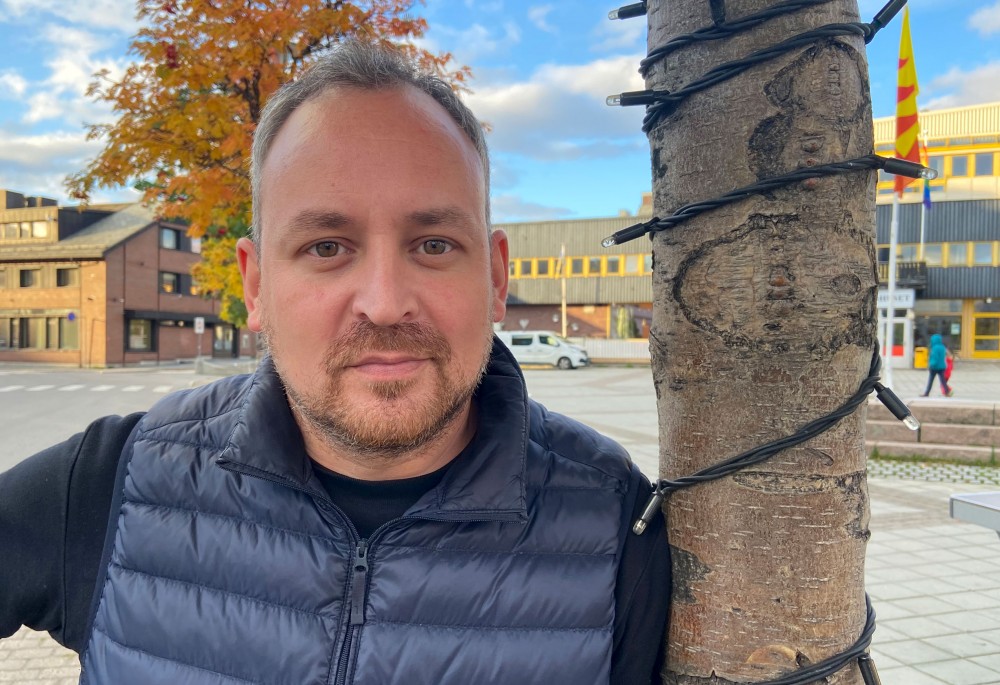 The Barents Observer talked with Vladimir Prokushev downtown Kirkenes shorty after he crossed the border from Russia. Photo: Thomas Nilsen

Vladimir Prokushev (36) believes the majority of those being sent to war have very little motivation to fight against Ukraine.
Read in Russian | Читать по-русски
By

Fearing he could be among those sent to the battlefield, Vladimir Prokushev did what thousands of other conscription-age Russian men have done after President Vladimir Putin on September 21 declared a so-called partial mobilization for the war in Ukraine.

Fleeing the country in order to avoid being drafted, however, wasn’t easy.

“I have mixed feelings about leaving Russia,” he says.

“Decisions were made very fast. I started to pack on Thursday and flew to Murmansk Friday morning. We drove to the border and now I’m in Kirkenes.”

The Norwegian border town is just a stop-over before heading on to the Baltics.

Vladimir Prokushev is originally from the Komi Republic in the Russian north. For the last few years, he has worked in Moscow as a journalist for the investigative newspaper Novaya Gazeta. Independent journalism is in itself some of the most dangerous jobs you can have in today’s Russia. Putin waged war on media long before launching the war on Ukraine.

Six of Novaya Gazeta’s journalists and contributors have been killed since 2000. Among them is reporter Anna Politkovskaya who was shot dead in her apartment block in Moscow on October 7, 2006.

“I talked with my editor first thing after Putin declared the mobilization. We agreed I should make it to Riga,” Vladimir tells.

50 of the newspaper’s reporters are already working from the Latvian capital, publishing the Novaya Gazeta Europa, a separate media outlet set up to circumnavigate the Kremlin’s censorship laws banning coverage of the war in Ukraine.

Vladimir Prokushev has good reasons to believe he would be drafted.

“I have a military background. Served two years in the army in Arkhangelsk back in 2004 to 2006. I have no health issues and I’m at the right age,” he tells.

As fear grows that crossing borders will be banned, exit queues are growing. But routes out of the country are declining fast.

International flights from Moscow’s airports to Armenia, Turkey, Azerbaijan and former Soviet republics in Central Asia were for the most sold out a few hours after partial mobilization was announced. This weekend, queues are reported at land borders to countries that allow Russians to enter without a visa, like at the checkpoints between Ulan-Ude and Mongolia, and to Georgia in the South Caucasus.

Last Monday, Poland and the Baltic states closed their borders to the entry of Russians with a tourist visa.

Finland will implement restrictions on entry of Russian citizens, including those with valid multi-entry tourist visas granted by other Schengen states, Foreign minister Pekka Haavisto announced on Saturday.

The last direct land border between Russia and Schengen-Europe is with Norway in the north.

Authorities in Oslo officially scrapped the popular visa facilitation agreement with Moscow on September 22. The Norwegian Embassy in Moscow has since this summer turned down many more applications and with the closure of the Consulate General in Murmansk in July, inhabitants in the two border towns Nikel and Zapolyarny have been hindered from applying for visa-free travel.

Calm in the north

Finnish border officials said traffic from Russia increased to double this weekend compared with last, but not at its two northern checkpoints with the Kola Peninsula, Salla and Raja-Joosepin.

Also Storskog, Norway’s only checkpoint with Russia, sees traffic as normal this weekend.

Chief of Police in Finnmark, Ellen Katrine Hætta, said to the Barents Observer that there are very few crossings by men evading conscription.

But, as she underlined, “we are monitoring the situation closely and have a good cooperation with the Finnish border guards.”

At one of the hotels in Kirkenes, the Barents Observer met a few young Russian men just arrived from the border.

“I’m in Norway,” one of them said with a relieved voice as he connected to the hotel’s WiFi and called home to tell his nearest he is safe. The man declined to speak in detail with the Barents Observer for fear of being tracked by Russian authorities.

Those entering Norway and Finland have Schengen visas. A majority of young Russian men now receiving a call-up to war have no visas. Also, most are only holders of domestic passports and have no financial means to leave the country.

Meanwhile, the Norwegian-Russian association SmåRådina calls on authorities in Oslo not to close the border at Storskog for people fleeing from mobilization.

“What now happens in Europe is a state of emergency. We ask the world to support Ukraine even more and put more pressure on Putin and his nearest allies. We also call on protecting those now leaving Russia to avoid mobilization and avoid being sent to Ukraine to kill,” the association writes in a press release.

With no visa or foreign travel passport, many are left with illegal options to leave Russia or hide from the army.

The Russian edition of the Barents Observer reported about ongoing chats on Telegram by people discussing how to cross the border to Norway illegally for those who do not have a Schengen visa.

Questions vary from asking about how many bears there are in the forest, to more on geographical conditions and how the checkpoints on the road function.

Russia has a several kilometers wide non-access zone before the actual borderline. This zone is fenced off by barbed wire, has numerous surveillance cameras and is patrolled by professional border guards. Also, there are several checkpoints on the road from Murmansk towards the border.

The majority of attempted illegal border crossings over the years have been stopped by FSB border guards and are met with harsh punishment.

However, two incidents with people entering Norway via the remote wilderness happened this year, one person in June and three others in August.

Meduza, a Russian offshore news online based in Riga, on Sunday reported that men of mobilization age soon will be banned from leaving the country. Authorities are going to close the borders, a source close to the Kremlin said.

Men will have to obtain permission from the military enlistment office before being allowed to leave.

On Saturday, dictator Vladimir Putin signed a law introducing lengthy jail terms for desertion in the time of mobilization and war. Men objecting to drafting risk up to three years in prison, while desertion is punished by up to 10 years behind bars.

Vladimir Prokushev says he understands why newly drafted soldiers would consider voluntary surrender on the battlefield.

“The Ukrainians have stated that all Prisoners of War (PoW) will be treated with dignity in accordance with the Geneva Conventions.”

With hundreds of thousands of conscript-age Russians risking to be cannon fodder in a war the majority don’t want to fight, leaving behind the weapons and surrendering is for many a question about survival. Life or death.

“It seems like authorities don’t care if the soldiers are fit for fight or not,” Prokushev said after reports are coming in about the chaotic collection of new soldiers.

In the tradition of dark Soviet anecdotes, gallows humor videos are circulating on social media. At one place, giggly drunk countryside men are on an airfield before boarding a mobilization flight. Other videos show draftees given rusted AK rifles and uniforms looking more like a World War II film set than 2022 military clothing.

“From what I have seen, they are at training for 2-3 weeks before being sent to war zones. I have no idea how the forces will use them,” Prokushev says.

“Maybe the Ministry of Defense plans to fight with high numbers of soldiers instead of using skilled soldiers.”