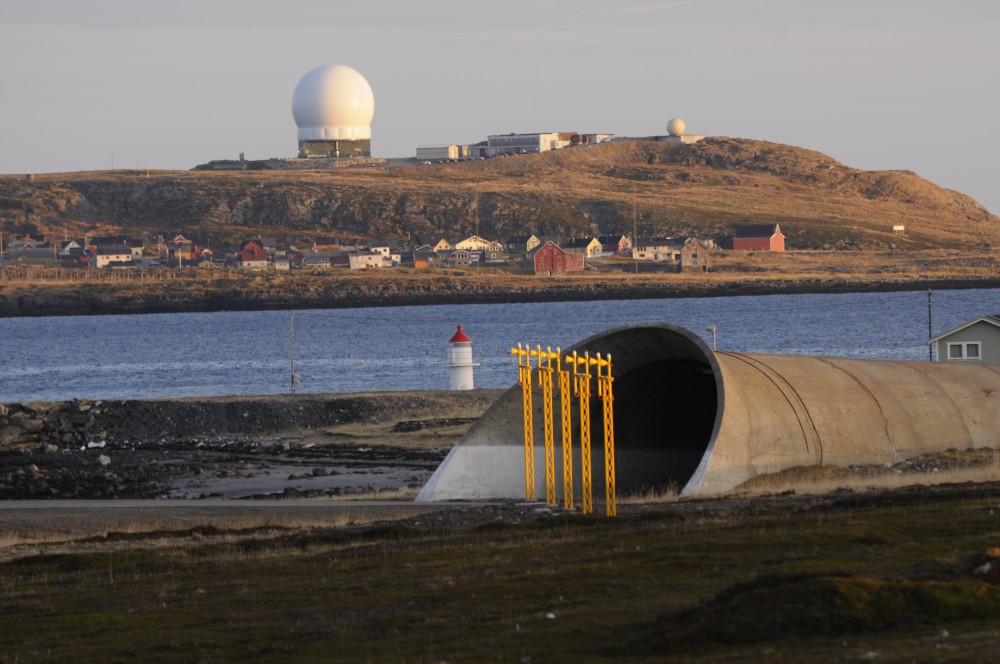 "I reported to the Patriarch about the desire to build a chapel in Vardø and he was very happy about this desire, blessed it," said Bishop Aleksandr of Plesetsk when talking to the local supporters of the project. If built, the chapel will have a panorama view towards the military radar complex used by the Norwegian Intelligence Service for space observation and monitoring of Russia's Arctic airspace. Photo: Thomas Nilsen

Bishop Aleksandr of Plesetsk was happy to hear that locals in Vardø had found a plot of land to build a Russian Orthodox chapel. The location is just next to a military radar complex operated by the Norwegian Intelligence Service aimed at monitoring air- and space activities from northwest Russia.
Read in Russian | Читать по-русски
By

The Russian orthodox church has a long history of working in close relation with the Russian intelligence services all back to Soviet times.

This is the story about how the Bishop of Plesetsk and Kargopol, Aleksandr Zaitsev, together with Archpriest Aleksandr Koptev of Onega deanery, managed to team up with locals in Vardø, a fishing town on Norway’s northeastern coast to the Barents Sea.

On a clear day, the Kola Peninsula can be seen in distance on the other side of the Varanger fjord. Gadzhiyevo, home base to Russia’s fleet of ballistic missile submarines, is a short 150 km to the east.

Founded in 1789, Vardø is the oldest town in northern Norway and had a comprehensive trade of fish and flour with Arkhangelsk and other ports in the White Sea region for generations.

Most contacts came to an end with the Russian revolution in 1917, but cultural ties were re-established after the breakup of the Soviet Union.

With millions of kroner in public grants from the Norwegian Barents Secretariat, the municipality and local stakeholders worked hard over the last three decades to build friendships with Arkhangelsk and Murmansk, the two largest cities in Russia’s northwestern regions.

Conferences were arranged and music was played. Friendship should be strengthened, despite colder winds of change that followed Moscow’s annexation of Crimea in 2014.

The orthodox church steadily got a more important chair at the table of cooperation. So did the FSB, whose veteran organization “Fond Shchit” (Shield Foundation) from Murmansk initiated several so-called memorial tours with locals from Vardø to the growing number of Russian-designed World War II memorials on both sides of the border around the Varanger fjord.

When the foreign ministers of Norway and Russia in 2019 commemorated the 75th anniversary of the liberation of eastern Finnmark by Soviet troops, the spirit of friendly cooperation by Vardø introduced a military arm to cross-border ties, bringing uniformed cadets from Yunarmiya (Young Army) National Military Patriotic movement to Norway for the first time.

The organization is weapons-trained and affiliated with the Russian Armed Forces.

First time the idea to build a Russian orthodox chapel came up was when former Mayor of Vardø, Robert Jensen, met with Bishop Aleksandr during a visit to his town’s friendship city Arkhangelsk in September 2017.

A key player in the relations-building with Vardø is Archpriest Aleksandr Koptev. His background is military.

He served his conscription from 1980-82. From 1985 till the collapse of the Soviet Union in late 1991, Koptev served in the Armed Forces, according to his résumé posted by the regional church. The overview, however, gives no details about where he served in the six-year period. A short biography by one of his spiritual friends, though, tells that the two met in the early 1990s when serving together in the same squadron at the Katunino garrison, not far from Arkhangelsk.

Katunino was at the time a Northern Fleet airfield. Several types of military aircraft operated from the base, among them the Tu-16, a twin-engine jet that existed in different versions; for maritime surveillance, electronic warfare, and even as a strategic heavy bomber.

Aleksandr Koptev was ordained to the rank of priest in 1997.

He has a black belt in karate, according to another post by the Arkhangelsk diocese. The Archpriest said he was a karate instructor when he this winter received a group of visitors from the so-called Arkhangelsk Men’s School to his Trinity Cathedral in Onega.

The Archpriest became a well-known visitor to Vardø.

Like in 2015, when he consecrated a worship cross at the site of an old Russian Orthodox burial. Afterward, he told online 29.ru that “Norwegians are friendly people, I was very pleased that they carefully look after the graves of our compatriots.”

Local Vardø-enthusiast Remi Strand was quoted by Arkhangelsk newspaper Pravda Severa saying: “This is a very strong symbol of our past history and future joint projects.”

In 2017, the Archpriest of Onega was again back in Vardø, commemorating another orthodox cross. With the Vardø radar in the background, as could be seen in one of the photos posted by newspaper Pravda Severa (click on the main photo to see all).

A year later, in 2018, Archpriest Aleksandr Koptev and Bishop Aleksandr of Plesetsk traveled together to the small Norwegian fishing village. This time bringing blessings from Patriarch Kirill to the opening of a monument to partisans who actively helped the Soviet army in the fight against Nazi invaders during the Second World War, the web-portal of Plesetsk church informed.

Cross-border travel was limited by the pandemic. The project to build a Russian Orthodox chapel in Vardø, however, continued. Now with support from higher ranks.

During an online conference in July 2020, Bishop Aleksandr of Plesetsk and Kargopol could tell the Norwegians that the Patriarch himself in Moscow supported erecting a chapel.

“We meet ahead of a celebration, the Day of the Christening of Russia, and like last year we approach you with a greeting from Patriarch Kirill […] Last time, I reported to the Patriarch about the desire to build a chapel in Vardø and he was very happy about this desire, blessed it, and said that we should mutually take part in it, both Plesetsk diocese, and Onega, so that we together make sure that the project is implemented. As far as I know, by today, the land plot where the chapel is planned built is being determined,” Bishop Aleksandr said.

He was then sitting next to Archpriest Koptev in the office of the Norwegian Barents Secretariat in Arkhangelsk. The secretariat financed the online conference like it previously paid for the Russian churchmen’s travel to Norway.

From the Vardø side of the video meeting, Remi Strand praised the message from Bishop Aleksandr.

Strand said a plot of land was found where the chapel could be built.

“Now we have to find out if we have acceptance from the Russian orthodox church for this specific place. The place is next to the tunnel, to the left of the tunnel in Vardø. It is a place where everyone can see the chapel,” Remi Strand said.

There was no need for Bishop Aleksandr to disagree with the location and his answer came straight away: “We agree.”

“Ok, then I will apply for a building permit,” Remi Strand replied.

Bishop Aleksandr apparently liked what he heard. “Yes, very good,” he said and added: “We will pray for it all to be a success.”

The Bishop then noted that his church would follow up as soon as the coronavirus situation came to an end. Russia lifted travel restrictions on its land borders on July 15th this year.

Meanwhile, Bishop Aleksandr, or Aleksandr Zaitsev which is his full name, has been sanctioned by Kyiv for promoting the war against Ukraine on the grounds that he blessed a rally in Plesetsk supporting the Russian armed forces’ special operation to liberate the puppet states of Luhansk and Donetsk.

At home in Plesetsk’s twin-town Mirny, the Bishop has his cathedral. The town is operated by the Ministry of Defense and access is closed to outsiders. Originally developed as a site for intercontinental ballistic missiles (ICBM), today Mirny is mainly known for its Plesetsk cosmodrome, where both military and civilian satellites are launched. Plesetsk is also a launch site when Russia drills its nuclear triad, like during the GROM exercise in late October this year.

The site has dedicated facilities used for test-launchings of Russia’s new intercontinental nuclear missiles, like the Yars and Sarmat.

Maybe the operators at the Vardø radar complex keep special eyes on missiles and rockets launched from Plesetsk.

“The station is located just 50 km from the border with Russia, served by Norwegian military intelligence. It’s no secret that the information it receives is transmitted to the United States,” Zakharova said.

She continued: “… there is every reason to believe that the radar will monitor precisely the territory of the Russian Federation and will become part of the US missile defense system.”

The Barents Observer has without success tried to get comments from Archpriest Aleksandr Koptev about the status of the chapel plans today.

Andrey Shalyov, Director of the Norwegian Barents Secretariat office in Arkhangelsk, who facilitated the video meeting between the locals in Vardø and Bishop Aleksandr and Archpriest Koptev, says in an email that this is not the “right time to discuss this project.”

“It is actually frozen while the chapel was almost ready, but we could not find money on the Russian side for the next stage of it.”