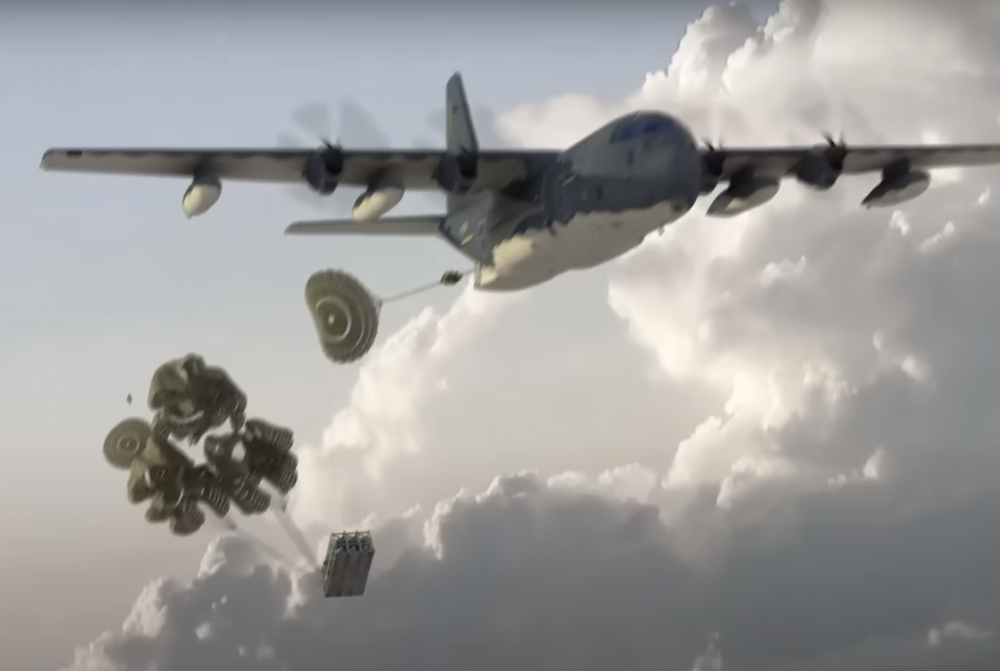 The brand new Rapid Dragon is a highly potent weapon system that can launch a swarm of cruise missiles from a standard military transport plane. The United States, with NATO members, will for the first time exercise this strike capability inside the Arctic Circle over the Norwegian Sea, sometime from November 9 to 11.
Read in Russian | Читать по-русски
By

“This is not signaling to Russia or any adversary,” assures U.S. Army Cpt. Margaret Collins.

She said in a phone interview with the Barents Observer that the area off the coast of Northern Norway is chosen because of the size needed for the test. The Rapid Dragon is developed to hit targets far away in different directions on land and at sea.

The exercise area west of Andøya and Tromsø in Northern Norway is about 150 kilometers long and 100 kilometers wide.

From this part of the Norwegian Sea, the distance to the homeports for Russia’s nuclear submarines on the Kola Peninsula is some 650 kilometers. In February, just days before Moscow’s onslaught on Ukraine, a Northern Fleet frigate tested a Tsirkon hypersonic cruise missile near Norway’s Bear Island in the Barents Sea as part of a larger strategic nuclear missile drill.

Neither the Norwegian Joint Headquarters nor the US Army are willing to share details with the Barents Observer about which missiles will be used in the upcoming exercise. However, a test of Rapid Dragon over the Gulf of Mexico in December last year was conducted with the JASSM long-range ground attack cruise missile which can hit targets at a distance of 925 kilometers.

According to Wikipedia, the Rapid Dragon is well suited for launching a swarm of cruise missiles as a mass attack on air defense systems such as S-300 and S-400. These are the transportable air defense missiles Russia’s Northern Fleet has along the coast of the Kola Peninsula to protect the strategically important submarine bases.

“We will demonstrate the weapon when training interoperability with our NATO partners. This is the first time a live fire of the system will happen in training,” said Public Affairs Officer, Cpt. Margaret Collins.

She added that the Rapid Dragon live fire outside Northern Norway is part of a drill with special forces also taking place in Poland and Romania.

The plane to bring in the Rapid Dragon up nort is a C-130J Super Hercules which will take off from an air base in the United Kingdom.

An advantage of the new weapon system is that the United States could rapidly provide massive strike capability to any NATO member by using the existing fleet of transport planes. Such planes, like the Hercules, can operate from landing runways as short as 900 meters.

There are several tens of such runways in northern Scandinavia, airports that can deploy the planes in case military air bases with longer runways are attacked by an adversary.

The module with the missiles is designed as a roll-on roll-off capability to enable rapid fielding and eliminate the need for aircraft modification.

Rapid Dragon has an onboard control module attached to the pack that enables the missiles and battle management system to communicate so missions and targets can be updated while the plane is airborne.

After the module is parachuted, weapons will be systematically released. Each will ignite, pull up, and proceed normally to the target.

The exact timing for the Rapid Dragon live fire within the 3-day period November 9-11 will not be announced.

“We can’t disclose details,” said Cpt. Collins. She noted that it could depend on the weather.

Andøya air base is by the Norwegian Government earmarked for receiving allied forces in case of crisis or war. The air base is on the coast to the exercise area and is today home to the country’s fleet of P-3 Orion maritime surveillance aircraft, to be phased out as six new P-8 Poseidon will be deployed to Evenes air base.

For Norway, NATO’s renewed focus on the North is welcomed.

“This type of integrated training with close allies increases our joint ability to cooperate in our immediate areas,” said spokesperson with the Joint Headquarters, Corporal Jonny Karlsen, to the Barents Observer.

“The United States is one of our closest allies. American presence in the northern regions is important for a credible defense of Norway and NATO,” Karlsen said and added: ”

“Through military presence and joint training in Europe, the US communicates that it contributes to NATO’s collective defense.”

The Norwegian Armed Forces have over the last years boosted training with other NATO forces inside the Arctic Circle, including joint fighter jets training with American bombers, warship navigation at sea, and army forces exercises together with the two neighboring coming members of NATO; Sweden and Finland.

Last week, Russia’s nuclear-powered battle cruiser, the “Pyotr Veliky” sailed out from Severomorsk for combat training in the Barents Sea.

The warship will exercise anti-submarine warfare and air defense operations, according to the press center of the Northern Fleet.