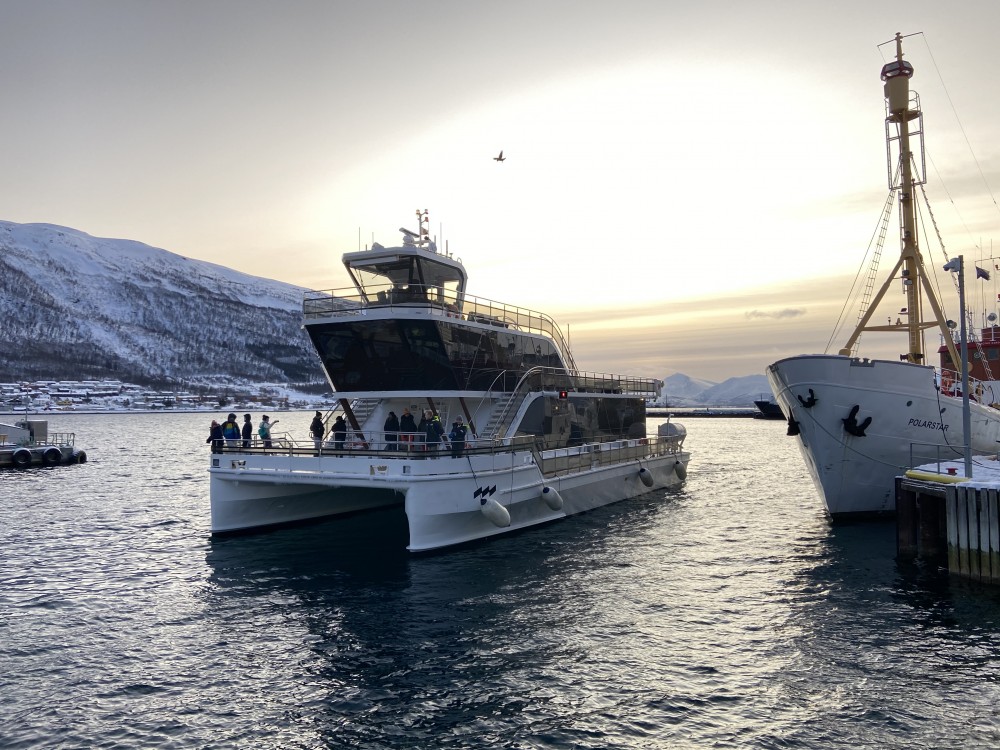 "Brim" is the first purpose-built battery-powered catamaran for Arctic waters. Here sailing out from the port of Tromsø for whale-watching. The sister ship "Bard" under construction and will be ready to sail Svalbard waters this summer. Photo: Thomas Nilsen

“The tourists care about their green impact, so the business is obvious,” says Agnes Árnadóttir, co-founder of the Polar tour operator that sails towards an emission-free future.
Read in Russian | Читать по-русски
By

Árnadóttir’s company that she founded together with Espen Larsen-Hakkebo draws a lot of attention from visitors to Tromsø mid-winter. Not only because of the special design features of the ship they sail out on whale-watching with to the fjords of northern Norway, but mainly because the sail silent for most of the time.

The battery-hybrid-electric catamaran “Brim” is the first of a kind inside the Arctic Circle.

“Brim”, the name meaning  ‘breaking wave’ in Old Norse, is a ship praised by the passengers. When sailing the electric motor, there’s no noise or vibrations. And who want to pay for noise when the goal is a magic outdoor evening under the Northern Lights with the sound of silence.

The waters outside Tromsø are the winter playground for killer whales and humpback whales. The whales are following the food, millions of herring, the best lunch a whale can get.

On whale watching safaris, the “Brim” can get much closer to the animals without disturbing them. In the summer season the ship will sail the Lofoten archipelago as previously reported by the Barents Observer.

The second ship, to be named “Bard”, is under construction further south in Norway. In a few months time new waters can be explorer by electric-sailing tourists.

From the port of Longyearbyen on Svalbard “Bard” will this summer bring tourists to some of the remotest destinations in the Arctic, Pyramiden and Barentsburg.

Brim Explorer has teamed up with Hurtigruten, the largest tour operator on Svalbard, and will operate the catamaran daily excursions to the pristine waters of Isfjorden.

“We have some 800 kWh of batteries on board, equalling to about ten Tesla car battery packages,” explains Agnes Árnadóttir.

Batteries, though, are not that green if the electricity charging them comes from dirty fossil fuel. That is a challenge in Longyearbyen where Norway operates its only coal power plant to provide electricity and heat to the 2,400 inhabitants.

“We aim to charge the batteries in port from a new pilot solar power plant,” Árnadóttir tells.

The high Arctic might not be the first place you should think solar power could break the ground as a new energy source. But that’s exactly what it is.  At 78 degrees North in summer, when the tourist sailing season peaks, the sun is high over the horizon around the clock.

“Svalbard is the place where we in summer can run on renewable,” Árnadóttir argues with enthusiasm.

“Times are changing to the greener. Travellers to the Arctic favours smaller explorer ships instead of larger. The tourists care about environment. We are sailing towards an emission-free future, and the Arctic is the obvious place to start.”

Agnes Árnadóttir says it is no coincidence that this happens in Norway.

“Norway has a good and strong ship-building industry. There are good governmental incentives to the green shift. Look at the success of electric cars,” she says.

Sales of full-electric cars in Norway hit a record high in 2019, reaching 42 percent of all new-registered cars.

The Barents Observer has previously told the stories about the plans to introduce commercial electric planes, busses, snowmobiles and mining-trucks. Even the country’s military border guards in the north are patrolling the land border to Russia on electric bicycles.

“By combining wave-breaking and green technology, clean Nordic design and focus on sustainable travel, we have created the first sightseeing vessel in the world able to operate a full day on electric power, and we look forward to using our knowledge to move the travel industry in a greener direction together with Hurtigruten at Svalbard,” Árnadóttir adds.

Help the Barents Observer report more about the green shift in the Arctic.
We live on donations from our readers.