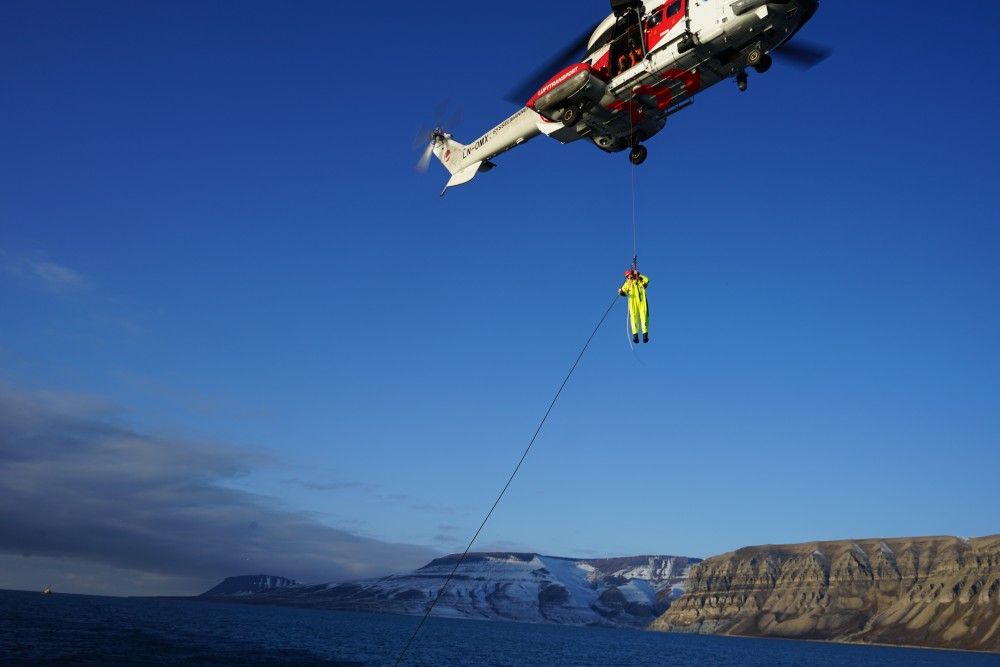 When the Viking Sky, with 1,373 people on board, sent out a mayday Saturday afternoon after engine trouble stranded the cruise ship in stormy waters off the western coast of Norway, rescue services were quickly activated.
By

Some helicopter resources were a mere hour away. Other helicopters were quickly mobilized from other regions of Norway.

On shore, the Norwegian Red Cross got the call at 2:30pm and quickly put out an alert to 400 of their volunteers along the west coast and central Norway.

With waves too high to deploy rescue boats, Norwegian rescue services used six rescue helicopters for some 19 hours to make a collective 30 trips back and forth from the boat, rescuing passengers and bringing them to shore in Fraena, a municipality in More og Romsdal, a county of some 261,500 people in western Norway.

Although passengers were injured, including things like bruising, trauma, and broken bones, and approximately a dozen were hospitalized, there were no fatalities.

By all accounts it was an astoundingly successful response by everyone from Norway’s search and rescue services, to police to humanitarian groups on land.

“This was a bigger incident than even what we’ve trained for,” Trond Bjørnøy, a search mission controller at Hovedredningssentralen, Norway’s Joint Rescue Coordination Centre (JRCC), told Eye on the Arctic in phone interview on Monday. “We were lucky. There were no fatalities.”

But some observers are pointing out that had such an incident happened in the Arctic, this type of rapid, overwhelming response wouldn’t have been possible. And that in an era of ever-increasing polar cruise traffic, they hope the Viking Sky incident, even though it happened in southwestern Norway, can serve as a wake-up call to the growing Arctic cruise industry.

The cruise industry is growing throughout the Arctic. Cruise Northern Norway and Svalbard, an industry marketing association, says that 150,000 cruise passengers travelled to northern Norwegian in 2018 and made 487,000 port visits (an average of three port visits per person), up 16 per cent from 2017.

At the time of its accident, the Viking Sky vessel, operated by Viking Ocean Cruises, a division of Switzerland-based Viking Cruises, was travelling from the Arctic Norwegian city of Tromso, to the city of Stavanger in the country’s South.

Besides Norway, the Arctic cruise industry continues to grow in the waters around other circumpolar areas including Alaska, Canada, Greenland, Iceland and Franz Josef Land in Russia.

Cruise boats are widely considered very safe. But as the industry grows, experts continue to raise questions about emergency response in the Arctic for incidents involving several hundred, or even thousands of cruise ship passengers, where the weather is harsh  and emergency services are sometimes located several hours away.

Big questions also remain as to how people should be extracted from such a situation and where they should, or even could be put, once rescue vessels have reached them given the Arctic’s often minimal infrastructure and sparsely populated areas.

A video by Viking Sky passenger David Hernandez as he waited to be rescued on Saturday:

Search mission controller Trond Bjørnøy says the JRCC’s extensive training allowed them to respond rapidly and effectively to the Viking Sky incident, but it would not have been the same had the incident happened in the Norwegian Arctic.

“This was very demanding for everyone,” Bjørnøy said. “I can’t tell you how many of our JRCC were involved. It was just everybody. But if this had been in the Arctic? We would not have been able to respond as rapidly. The distances are too big. You can’t get people in as rapidly.”

Anders Thorheim, head of prepardness for the Norwegian Red Cross, says the humanitarian organization trains extensively with Norwegian rescue services and local authorities, to respond to incidents like the Viking Sky.

In all, the Red Cross ended up mobilzing 240 volunteers to assist in the rescue operations this weekend doing everything from receiving evacuees and providing first aid and psychological support, to providing practical and logistical help, to bringing food and drink to helicopter crews during the 19-hour rescue mission.

Thorheim says the growing cruise industry in Arctic Norway has prompted the Red Cross to increasingly discuss northern emergency preparedness with local authorities as well as neighbouring countries. They’re also increasingly working through scenarios that take into account the challenges of responding in harsh Arctic weather.

“The further North you go, it’s less densely populated and that also goes for our Red Cross representation,” he said in a phone interview from Oslo.  “Our preparedness is not as good in the far northern part of Norway as it is in the area where this specific event took place.”

“There’s a growing number of cruise ships now going through these more Arctic areas. We are trying to meet the potential needs and dangers that that entails in our preparedness contingency planning. But without a doubt, it would pose a more difficult situation for us if (an incident) were to happen in those areas.”

Does the Polar Code need a rethink?

Odd Jarl Borch, a professor at Norway’s Nord University who specializes in maritime emergency preparedness,  says the the rapid growth of the Arctic cruise industry means there’s associated trends that need to be addressed.

Cruises are coming to the Arctic both earlier in the year and leaving later and later in the autumn, something he describes as “stretching the limits somewhat.”

He also says the increasing number of expedition cruise ships being built will require greater efforts to bring in personnel experienced with the polar regions as well as training young officers for working in the Arctic.

Borch says he’d like to see “a Polar Code 2.0” discussed.

The International Maritime Organization’s Polar Code came into force in 2017 in response to growing shipping traffic in the Arctic and Antarctic. It covers everything from ship design and equipment; vessel operation and training, as well as search and rescue; and, environmental protection.

“There should be discussions about expanding the Polar Code jurisdictions to more Arctic areas,”  Borch said in phone interview from Bodø, Norway. “Most of the polar code is related to vessels going into the ice, but most of these cruise vessels do not go into the ice, they only go very close to the ice.”

He’d also like to see the Polar Code expanded to reflect the different types of vessels increasingly present in the Arctic.

“You also have to have more focus on all kinds of ships that are operating in the Arctic region including things like fishing boats and leisure boats like yachts, that are getting larger and going up to more extreme areas.”

The accident investigation bodies of United States and the United Kingdom, two countries that had large numbers of their nationals on the Viking Sky, will also be participating in the Norwegian investigation.