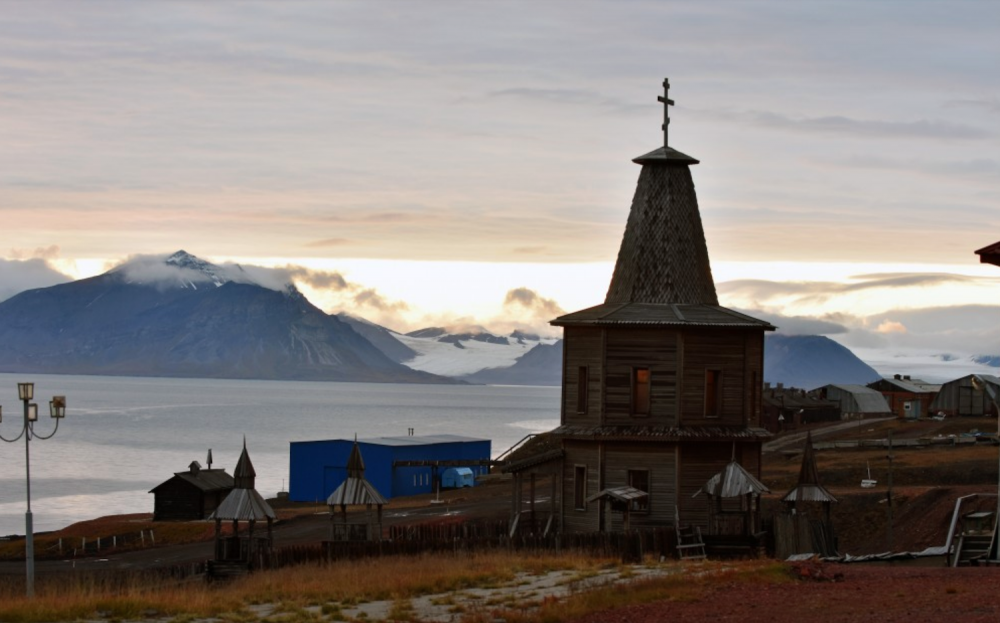 "​A hybrid-strategy is underway in which Russia bolsters its legitimate presence in Svalbard on one hand while raising tensions in the maritime space on the other hand," says polar geopolitics expert Elizabeth Buchanan.
Read in Russian | Читать по-русски
By

Diplomatic voices are louder and warships sail closer. Svalbard is increasing in strategic importance for Russia. As it is for Norway, which has sovereignty over the Arctic archipelago.

“We should expect more sabre-rattling,” says Dr. Elizabeth Buchanan to the Barents Observer. She underlines that such military-flexing, though, is a distraction.

Dr. Buchanan is an expert on polar geopolitics and lecturer in strategic studies with the Deakin University in Australia. Next January, she is one of the main speakers at Norway’s large Arctic Frontiers conference in Tromsø.

“The real push from Moscow when it comes to Svalbard will be occurring onshore, in plain sight, well within the bounds of the Treaty,” Buchanan says.

She expects to see more activity initiated by Moscow coming, like researchers, industry, tourism, all that can populate Russia’s outposts on the archipelago.

“Each citizen affords Moscow an opportunity to play the ‘protecting Russian nationals’ playbook - as seen in South Ossetia and Crimea.”

Today, state-owned mining company Arktikugol runs the society in Barentsburg, but underground coal resources are running low and alternative businesses, like tourism, are on growth. Population is on the decline and consists nowadays of about 400 Russian and Ukrainian citizens. A second Soviet-time settlement on Svalbard is Pyramiden, a coal-mining town that was left to ghosts in the late 1990ties.

Military speaking, Svalbard is of great strategical importance, located between the Barents-, Greenland-, and Norwegian Seas. The one controlling Svalbard is also likely to control the important gateway from the shallow Barents Sea to the deeper North Atlantic.

For Russia’s Northern Fleet, the so-called Bear Island Gap between mainland Norway and the archipelago’s southernmost island is key to conducting sea denial operations in and over the maritime areas further south, potentially threatening NATO’s transatlantic sea lines of communication.

With international tensions again on the rise in Europe, Norway is well aware of Svalbard’s geostrategic location.

The 1920 Svalbard Treaty does not put a ban on Norwegian military presence at Svalbard but limits the use of the archipelago for possible war-like purposes.

“The challenge presented by the 1920s Treaty in the 2020s is that the conception of what constitutes ‘war’ and ‘peace’ 100 years ago is now increasingly blurred. This ‘grey zone’ is a geostrategic space in which Putin’s Russia is well-versed,” Dr. Buchanan writes in a recent report for Janes Information Service, a global open-source intelligence company specialising in military and security topics.

To the Barents Observer, she elaborates:

“A hybrid-strategy is underway in which Russia bolsters its legitimate presence in Svalbard on one hand while raising tensions in the maritime space on the other hand. Calling out Russian activity (closer Northern Fleet sailings, for example) is permissible, but it is harder to draw a line on Russian activity well within the Treaty bounds - and Moscow will poke and prod the limits of Norwegian comfort with enhanced presence in Svalbard.”

Pointing to the October voyage by the Norwegian navy frigate “KNM Thor Heyerdahl”, Buchanan says it is of most interest for Russia right now to draw Oslo out into double standards.

“Moscow is quick to protest any Norwegian military activity on Svalbard given the Treaty requirement that Oslo cannot use the archipelago for ‘war-like purposes’. While not defined, ‘war-like’ is a label in the eye of the beholder, and one used by Russia to incite other Treaty parties into the debate. Here, China becomes of interest,” Buchanan argues.

China and Russia are among the 46 signature parties to the Svalbard Treaty.

Elizabeth Buchanan expects Russia to use a multipronged strategy. “Hybrid in nature, which will blend military pressure in the northern waters, increased military exercises and tests to beat the drums of war, with benign research and economic activities at Svalbard settlements.”

“I expect the China card to be played as well - cultivate Chinese-dissatisfaction and anxieties over Norwegian threats to Beijing’s economic interests and research interests housed at its Yellow River station. As such, there are many levers Moscow has available to frustrate any NATO or Norwegian ambitions to secure Svalbard.”

China’s Arctic Yellow River Station was established by the Polar Research Institute of China in Ny-Ålesund, north on Spitsbergen, in 2003.

If a European or global conflict should escalate between NATO and Russia, defending the bastion with the Northern Fleet’s ballistic missile submarines sailing Arctic waters east and north of Svalbard is believed to be the main priority for Russia’s defence command.

Establishing the ability to disrupt any attempts by NATO to interfere requires control of the Bear Island Gap.

“If under pressure, whether by NATO Arctic engagement or further Norwegian securitization of Svalbard, I see Moscow redrawing its bastion defence to a hard-red line between Spitsbergen and Norway - controlling the naval waters to this point ensures unfretted access to and from the North Atlantic for Russia’s Northern Fleet. But this would raise tensions in the High North - and that is simply bad for Russia and Europe’s commercial interests in the region. China’s interest in a free-flowing polar silk road would also be threatened by tension on the European end - so there is some solace in the collective interest to maintain stability in the region. What matters is Moscow has the optionality to pivot between a free and open Russian Arctic Zone and a robust bastion defence setting,” Buchanan explains.

She concludes: “This is essentially what Russia is working towards with regards to Svalbard - legitimate presence, a bolstered capability to deny access prior to ever having its own access denied by the West, and a built-in fail safe by fanning Chinese dissatisfaction with Norwegian Svalbard policy.”

Norway in joint training with B-52 up north