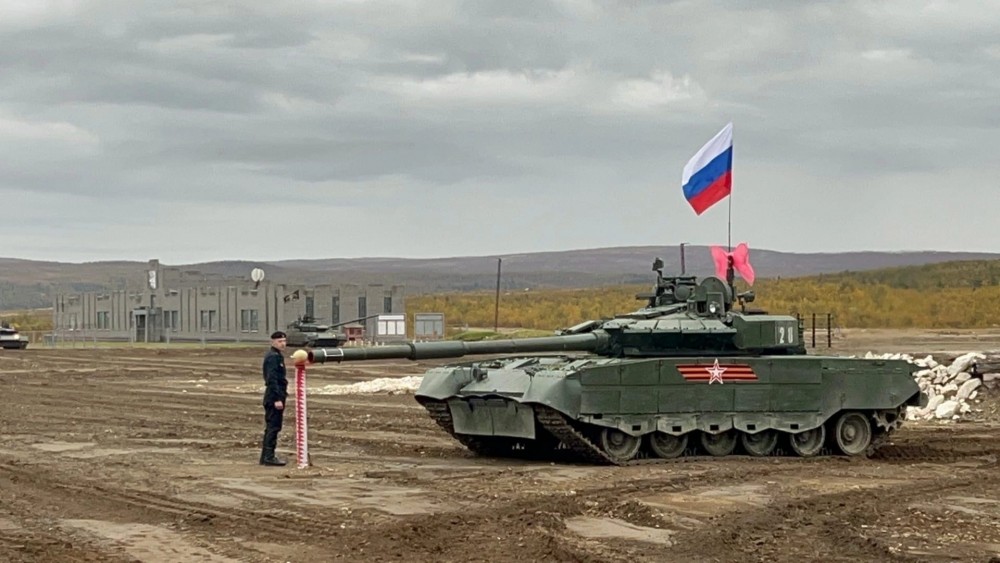 A Northern Fleet female crew shows skills by cutting a melon with the tank's gun. Photo: Pechenga Municipality via Vkontakte

An unconfirmed Ukrainian military source claims that up to 250 soldiers from the Northern Fleet’s 200th Motorized Rifle Brigade in Pechenga are killed in the latest counter-offensive in the Kharkiv region.
Read in Russian | Читать по-русски
By

There were few signs of mourning as people flocked to the ‘tankodrome’ near Korzunovo on Sunday to celebrate the Day of the Tanker, an annual military festive in Russia honoring soldiers driving tanks.

The venue is next to an abandoned cold war air base, some 15 kilometers from Russia’s border with Norway. It serves as a training ground for the fleet of T-80 battle tanks, of which most are sent south and take part in Putin’s onslaught on Ukraine.

Simultaneously as the 200th Motorized Rifle Brigade in Pechenga celebrated, reports started to come in about the unit’s massive losses of soldiers during the latest counteroffensive by Ukrainian forces in the Kharkiv region.

The analytical news site Dialog reported that 250 soldiers from the 200th Separate Motorized Rifle Brigade of the Northern Fleet from the Murmansk region were killed.

The source, reported by journalist Roman Tsymbalyuk via Telegram, is from the Ukrainian military establishment.

The press service of Russia’s Northern Fleet has for now not replied to questions from the Barents Observer on the alleged losses.

Soldiers from the Pechenga region have fought since the war on Ukraine started in 2014. This January, hundreds of soldiers were sent to what they believed was a coming military exercise in the border regions with Belarus and Ukraine.

On February 24th, they found themself fighting a real war.

Losses were big, but the northern regions of Russia continued to send soldiers with limited training.

In July, a mixed ad-hoc volunteer battalion from the 200th Motorized Rifle Brigade was sent to the war zone in eastern Ukraine after a short training period in the Pechenga region. A few weeks later, the two northern regions of Murmansk and Arkhangelsk each sent one battalion of fighters that just had got a few weeks of training in Pechenga.

On social media, people in Murmansk criticized the so-called mixed volunteer battalion. One asked “why the hell such crap detachments of hodgepodge volunteers were sent” as long as Russia has an army of 900,000.

Ukrainian military said on Sunday its forces have retaken 3,000 square kilometers in the Kharkiv region over the last few days of fighting. Some 350 Russian soldiers have been killed on Saturday, the Guardian reported with sources from the Ukrainian military.

Russian fatalities since Febraury 24th stand at 52,250 by September 9th.

It also reported the loss of 4,584 armored combat vehicles, of which several tens are tanks sent to the war from the 200th Motorized Rifle Brigade on the Kola Peninsula.

Meanwhile, a few of the remaining modern T-80BVM tanks in Pechenga were used to demonstrate skills for the local inhabitants.

According to a pre-announcement from the Northern Fleet, Sunday’s show would include spectacular jumps by tanks, a tank carousel exercise including flank shooting and firing on moving targets. Pechenga municipality posted this video on its Vkontakte page after the show.

Of the more weird particular performances are “tank waltz” and a female tank crew demonstrating how to slice a watermelon with the tank’s gun.

On the sideline in Korzunovo, military weapons and gear were on display, the Northern Fleet’s military band played music, food was served and the audience could choose to ride on a T-80BVM tank or a tracked MT-LB vehicle.

The Barents Observer has previously reported losses from the 200th Motorized Rifle Brigade to several hundred in the early days of Russia’s invasion.

In March, reports from Ukrainian military came in that Colonel Denis Kurilo was killed amid fighting near Kharkiv.

Kurilo was commander of the 200th Motorized Brigade and had been leading Russia’s attack on Kharkiv, the Independent reported.